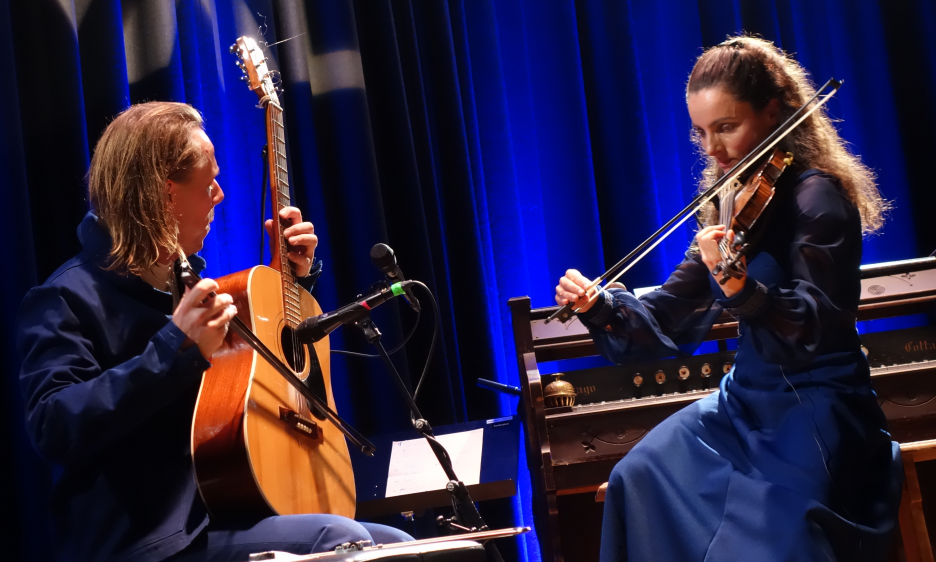 By Henning Bolte
October 17, 2019
Sign in to view read count
Oslo has its week-long Jazz Festival taking place in mid-August at Sentralen and various locations from bar to church to opera house and university auditorium in the Norwegian capital. This already indicates something of the variety of the presented music. This year's edition has been the last one under the thirteen-year aegis of bassist and festival director Edvard Askeland. He will be succeeded by Øyvind Skjerven Larsen, not a stranger to the international jazz world through his manifold national and international functions in the field, including the past six years working for Norsk Jazzforum, a non-profit organization working for all groups connected to the Norwegian jazz scene—clubs, big bands, festivals, education institutions and musicians. During the last two days of the festival, 16 and 17 of August, I attended concerts at Sentralen and Nasjional Jazzscene Victoria. Sentralen is a former savings bank building (Sparebankstiftelsen DNB) that was transformed into a cultural center with six stages/concert halls, creative workplaces, conference and office rooms and restaurants. Victoria is a former cinema and theatre place that was turned into one of the best equipped jazz venues in Europe a decade ago and is presently under the direction of Jan-Ole Otnæs. Free Improviser's festival Blow Out ran parallel at Deichmann library in the city center and there was a chamber music festival as well as a world music festival—apparently not too much for the thirst of Oslo with its 700k people. The parallelism of the two jazz fests is actually a felicitous affair. Blow Out is a musicians-own festival, organized by the two Norwegian drummers Paal Nilssen-Love and Ståle Liavik Solberg. It is an annual meeting point of a closely interconnected international scene.

First, there was Bilayer, the duo of trumpeter Hilde Marie Holsen and electronic musician/ sound artist Magnus Bugge: the duo dived deep into electronic sound streams and navigated through its strata, spectra, its turbulences, its quietness, stillness and serenity. It was fascinating to experience how they furrowed and created a floating balance of all these moods. Holsen and Bugge delivered a truly orchestral work of significant format that unfolded in highly concentrated and captivating way. Eivind Aarset, a key musician of a unique quality, is the middle figure in the new unit Aarset/Bang/ Engen. Anders Engen was one of the drummers of Aarset's groundbreaking album Électronique Noire 20 years ago and was involved in Aarset's later albums Sonic Codex and Connected as well. Aarset and Jan Bang are frequent, long time musical partners, witness Aarset's more recent album Dream Logic . This meeting would then be a question of detecting and elaborating new qualities from the unification of these two strong axes of Aarset's widely branching musical field. Bang/Aarset/Engen were sieving echoes from the past and created a vivid, radically subdued trip of joyous nostalgic allusions. It unfolded in cinemascope on the edge of iridescent moods. It was a fascinating interplay of sprouting and percolation where deep blues-grounds, a haze of Morricone and many more past time traces were crossfading.

Maybe the most surprising appearance was the bond of composer/multi-instrumentalist/vocalist Maja S.K. Ratkje and guitarist Stian Westerhus with Ratkje on (prepared) harmonium, bells, violin and singing/whistling, Westerhus playing arco and pizzicato on acoustic guitar and singing. They seduced the audience with a highly intimate acoustic performance. The unfolding flow of soulfully gleaming song-lines were permeated by oblique-subtle tonal nuances and roughening percussive interventions. Both developed in dense and continuously tense and evident interplay. They enabled the audience to breath with the flow of their performance thereby kindling immanent cathartic potentials. Especially the returning song "Sayago -such a sliding sound" went under one's skin. It was a rich and captivating affair of qualities different from those we mainly associate these two outstanding artists with and know from performances. Only after their wonderful performance I learned that they had performed an opus Ratkje had written for the National Ballet as music to Jo Strømgren's dance piece "Sult"/Hunger" after the well- known Knut Hamsun novel published in 1890. At the festival Ratkje did not play the original pump-organ built/prepared by technicians of the opera house. Instead, she played on a lightly prepared harmonium and Stian Westerhus came into the game. The original instrument can be heard on the album recently released on Rune Grammofon. Although I was not aware of the connection with Hamsun's "Hunger" during the concert, it could clearly be felt that the music was permeating epochs creating a specific atmosphere of a past time re-imagined. It felt not so much as a genre-defying work but rather as a time transient work that made use of different appropriate means for the specific purpose of the dance piece. It should be clear that the recorded version is a stand-alone piece of work. To allow yourself the freedom of creating a highly cohesive work like this one, is—to put it like this—a quite Norwegian trait of re-creating music and, it should be emphasized, this was an outstanding, moving and transcending case of the unfurling of multifarious high-level artistic abilities that drew from a rich stock of resources.

Electronics: what, where, when, how

Hvelvet Room at Sentralen, also called The Vault, is small enough to oversee and observe what musicians, especially those working with electronics, are doing at their 'workplace.' Holsen/Bugge had the most open setup. Trumpeter Holsen, standing, faced the audience and operated electronic devices with her left hand, which she did, perhaps due to the physical parameters of her instrument, from the very beginning of her career. At certain moments she turned around and faced the electronic devices. all standing up. Bugge was sitting at the front of the ground-level stage facing Holsen. His 'workplace' formed no barrier towards the audience, but you could easily follow his actions from that side view. Bugge worked with a visually and sonically extraordinary component, a vintage NRK (Norsk Rikskringkasting/Norwegian Broadcasting) tape recorder from the 70s that was extensively used in the high north of Norway and saved from destruction by an attentive person. Jan Bang is always working standing and highly movable, his body movements and gestures accompany and figure the musical lines. He acts as a mixture of percussionist and conductor or ballet dancer. That elevates the music in physical ways giving the impression of an alchemist tapping from a rich reservoir of hidden, secret sources. It becomes graspable by the rhythm of his body movements. In the trinity of Aarset/Engen/Bang it is mainly about shifting in and out. The Holsen/Bugge duo had a high emergence level but more as a peeling or a washing process to develop and give shape to the strata of sound. Both units had an enveloped acoustic component (trumpet, drums) driving the music. Holsen's acoustic trumpet sounds merged into/with electronics in a dialectical way. Marvelously she worked her way into pure trumpet sound. Engen's drums served both the whisper mode and the deep base mode, which gave the music a blues feel. His way of achieving that was also special. He acted as a kind of blind dancer with subtle and forceful gestures. Eivind Aarset is a kind of engineer deeply focused in the background. His actions were opaque with sudden lightning turns into flashing and shrieking sounds attracting attention to his place.

A nice and interesting counterpoint was the Kind-Of-Blue concert of trumpeter Mathias Eick & Friends: Jon Balke (p), Johannes Eick (b), Håkon Mjaset Johansen (dr), Martin Myhre Olsen (alto sax) and Kjetil Møster (ts) in the roles of Bill Evans/Wynton Kelly, Paul Chambers, Jimmy Cobb, Cannonball Adderley and John Coltrane. I attended it with some skepticism and curiosity. It did not turn out as a 100% remake per Mostly Other People Do The Killing Blue. Playing in fabulous quality the companionship kept close to the original but in its own voice. After a short while of watching and listening it turned out as an intriguing experience, primarily from hearing the rhythm section's unflagging serving and subtle work. Where will you still be given the opportunity to listen to such music and learn from a live concert how a rhythm section functioned in those days (1959) and learn how much has changed in comparison to these days drummers/drumming! It was also intriguing to watch and listen to feral Kjetil Møster in the role of young John Coltrane (33 years he was at the time of the recording)! Such unique and masterful music played at such high stakes cannot be other than a deeply enriching experiential highlight.

Oslo Festival clearly is a 'home' festival. The vast majority of participating musicians and groups are Norwegian or Scandinavian. There were musicians from Brazil and the US and a Chinese trumpeter, Li Xiaochuan playing with a Norwegian group. European musicians from outside Scandinavia are hard to find. This year's edition had the Taksim Trio from Istanbul and there was a combined Russian-Norwegian group Treskatresk with Russian pianist Andrej Kondakov and well-known bassist Vladimir Volkov and that was it. Should it be a grown habitude or a conscious decision? Strikingly, the festival of Molde, one of the internationally most known Norwegian festivals, shows the same constellation. Besides Norwegian and US-American groups there were just two European musicians from outside Scandinavia in the program, Kaja Draksler Octet and Russian Evgeny Lebedev Trio, which is on a Norwegian label. The future will show what the goal of the new appointed director of Oslo Jazz Festival, Øyvind Skjerven Larsen, "to make Oslo the European jazz capital," means and entails.