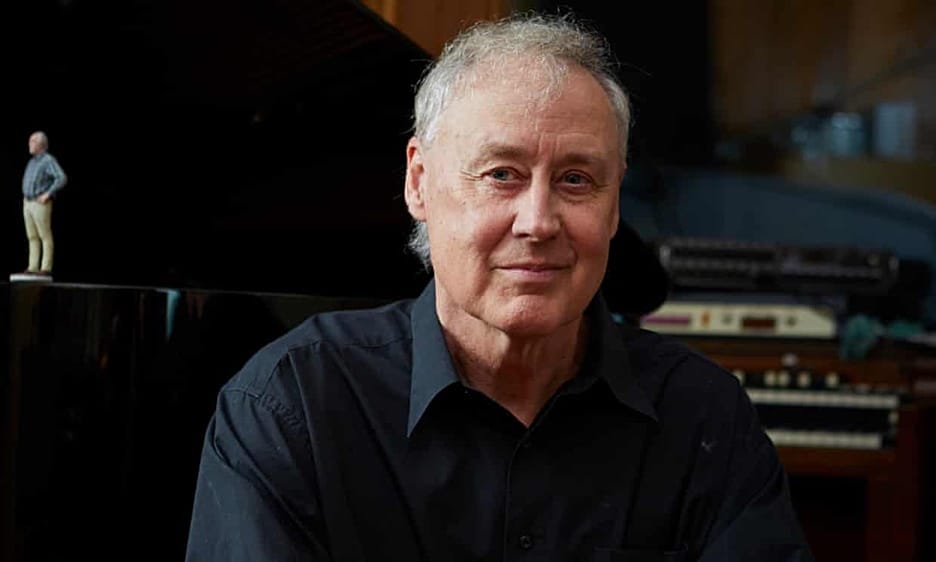 "It's, what, our fourth show? We should have it together by now," Bruce Hornsby laughed during one between-song lull while a couple of his cohorts quickly tuned up. The joke was that he'd forgotten the planned order of songs to be played, though that's certainly understandable for someone normally used to winging it without a set list at all. To listen to the actual performance, though, there was no sign of anything in less than prime shape at all. All seven players onstage were sharp and on target, even as the pieces got devilishly tricky and even more weird.

Classy indie-chamber-pop sextet with singer-pianist who's done everything: the pairing could hardly be more natural and still ready to surprise. It was only fitting that such restless collaborators would take a jaunt together once they'd crossed paths. yMusic had already joined Hornsby for a couple past shows and contributed to the excellent Absolute Zero (Zappo, 2019). Some of that material appeared again here on this mini-tour, notably in a touching "Cast Off" and the exuberant semi-Sun Ra-homage of "Voyager One." Still, as followers of either name know, whatever you've heard them do before will prove to be only the start.

yMusic's opening portion was a string of picturesque art pieces using their odd instrumentation (strings, bass clarinet, flute, trumpet, French horn and more) to build nature scenes in sound. A rhythm-heavy opener titled "Zebras" was themed around open plains and wildlife; another highlight "Flood" was patterned after the swells of ocean waves. The set was primarily a showcase for the brand-new Ecstatic Science (self-produced, 2020), the first release in their 12-year history to feature some of their own original music. It's different from their past commissioned works and yet not exactly a departure; the group's treatments and found-sound tones (such as scraping strings or using clarinet keys for percussion) make everything sound all their own no matter what they do.

Hornsby's solo stretch unfolded with his trademark unpredictability, not least because it was based as usual on taking audience requests. "Harbor Lights" drifted from its gentle introduction through a series of funky verses and lush choruses, rising and falling in one extensive flight after another. With each staple that followed, it was only a matter of time before he would similarly start vamping and improvising around the framework, hunching over the keys like a mad scientist while stretching and prodding each one into some fresh shape.

The solo piano section skewed most toward Halcyon Days (Columbia, 2004) before heading further out into non-album deep-cut territory. One of them had Hornsby impressed enough to warn the crowd: "Now this is an interesting request. If you don't like this, blame the person next to you. It might be theirs." It turned out to be a understated read of "Nobody There But Me," beautifully dedicated to Willie Nelson and Charlie Haden, though the soft ballad treatment still had room for a touch of boogie stomp in the middle. Next he declared the Haden homages a theme of the night with "20/20 Vision," a folksy cut he once recorded with the late bassist on Rambling Boy (Decca, 2008).

Some initial scratchiness to Hornsby's voice was gone by the time the joint set kicked off. The larger group had a little less freewheeling spontaneity, though there was significant rearranging for both the Zero pieces and the almost-obligatory hits. "The Way It Is" floated smoothly in a vaguely classical vein with solos for each of the yMusic members in turn. "The End of the Innocence" veered from AOR mode into a dreamy passage taken from Keith Jarrett's Sun Bear Concerts (ECM, 1978). When "Mandolin Rain" eventually closed things out, it was the sad minor-keyed treatment first developed during Hornsby's bluegrass stint with Ricky Skaggs.

The performers defied any more song requests for the encore, simply because the plan was to present a fresh piece newly written by all seven together. "Deep Sea Vents" turns out to be an absurdist oddity going from jaunty jazz scat to minimalist cabaret swing, complete with surprisingly catchy lines about cephalopods. If there's one way to sum up the smarts and humor of all involved, this could have hardly done a better job. The mini-tour may have only lasted for five shows in all, but it seems increasingly unlikely that such sparkling chemistry won't draw them all back for weird science (or who knows what else) somewhere down the line. Surely there's no limit on space still to explore.