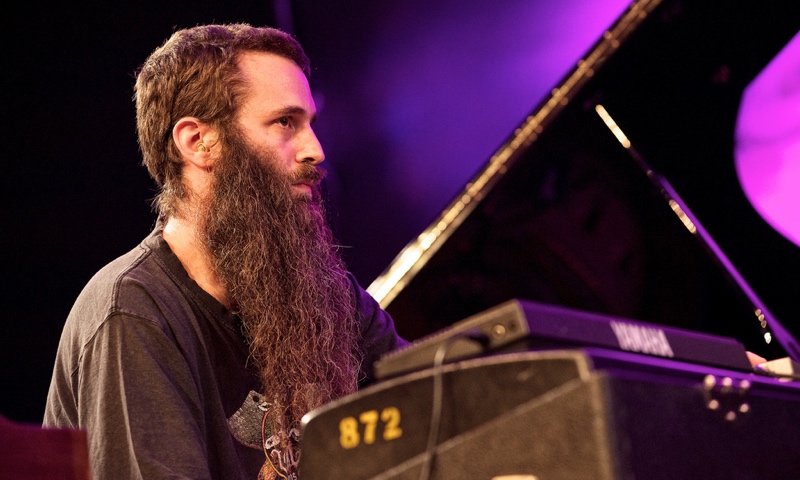 BY LUCA CANINI
October 20, 2017
Sign in to view read count
In 1988 Bill Laswell produced Iggy Pop's album Instinct. Back then, little he could have known that, almost thirty years later, he would have been instrumental in facilitating the iconic singer's first foray in the Jazz world. Loneliness Road (RareNoiseRecords) documents the latest incarnation of James Newell Osterberg Junior, the front man of proto-punk band The Stooges. In this interview pianist Jamie Saft details the making of this one-of-a-kind project.

A graduate of Tufts University and the New England Conservatory of Music, Saft is a musician of remarkable eclecticism and musical voracity, who has honed his skills in John Zorn's projects like Electric Masada and The Dreamers. Album after album he has established himself as a reference artist in the competitive New York scene thanks to project like his trios featuring Steve Swallow and Bobby Previte, or Greg Cohen and Ben Perowsky, or collaborating with masters like Wadada Leo Smith, Dave Douglas, Ben Goldberg and Cyro Baptista. With hindsight, it will surprise only a few that Iggy Pop's jazz ventures have started with Jamie Saft at the helm.

All About Jazz: Did you envision Loneliness Road as a project that would feature a guest singer, from the beginning?

Jamie Saft: I had initially conceived an instrumental piano trio book of music for Steve Swallow, Bobby Previte, and myself. The album was supposed to be a followup to The New Standard (RareNoiseRecords), the record we had released in 2014. I put together simple structures to present to improvisors who need little instruction-mainly harmonic guideposts around which we build. Steve and Bobby can make magic out of the slightest gesture.

AAJ: Why Iggy Pop? And how did you get in touch with him?

JS: We initially reached out to Iggy through our mutual colleague and fellow musical traveler Bill Laswell. Iggy's voice and approach to constructing songs is iconic. He cuts through all artifice and goes straight to fundamental truths of life and music. Laswell asked Iggy if he'd be interested in hearing our tracks and he said "sure, send them on." I sent three tracks to Iggy that I thought he would enjoy listening to. Within 24 hours, Iggy wrote us an email that said "I love this music, I'm definitely going to do this-all 3 tracks-so you managers figure it out."

AAJ: How did you choose the tracks to work on with Iggy?

JS: The three tracks I chose to send Iggy were fully realized as instrumental tracks already. I had not conceived of making a "backing track" for Iggy at all. He took our fully realized instrumentals and spent almost 6 months listening and absorbing these tracks. Then Iggy went into a studio in Miami and recorded his vocals. He told us that he sent us his very first takes of each of the three songs. Iggy said "the first takes just had the juice!!!" He also said by the time he got into the studio he was ready to blurt out all three tracks and didn't need any lyric sheet or music stand. He had dug so deeply into each track's harmonic and melodic world already. He had also come up with completely realized lyrics in his mind, for each tune. So he retained the energy of the first takes after having worked so hard on the instrumental tracks. Iggy brought lots of magic!

AAJ: The way he sings on those three tracks is astonishing. He has a remarkable control over the voice, the details and the feelings the music evokes.

JS: Iggy's contribution to this album is on such an incredibly high level. It is magnificent in my opinion! He is a master of many different disciplines. His lyrics are so fundamental and profound. It's as if they were always there. His control of his instrument is that of a virtuoso (just as Steve Swallow and Bobby Previte are both virtuosos on their respective instruments). The warmth, honesty, and pure positivity of Iggy's words on this release have restored my faith in humanity. I am honored to have collaborated with such a master.

AAJ: How was it to work with such a "big star"?

JS: Iggy is a wonderful person, down to earth, honest, real. He was extremely reasonable throughout. We never rushed him and he was given all the time he needed to do his thing at the highest level. And the results speak for themselves.

AAJ: What were the reactions of Bobby Previte and Steve Swallow?

AAJ: RareNoiseRecords has become of safe haven for your music. What is your relationship with this label like?

JS: My relationship with RareNoiseRecords has been very fruitful. Its founder, Giacomo Bruzzo, has a deep vision of what is possible in music and has stewarded RareNoiseRecords with great care. His courage has allowed me to pursue a number of different musical paths that are fundamental to me. From collaborations with the great masters of improvised music, people like Wadada Leo Smith, Roswell Rudd, Joe Morris, Steve Swallow, to many different musical directions that interest me, Reggae and Dub with the New Zion Trio, the darker arts with Slobber Pup, Psychedelic Country Ambient music with Bill Brovold... RareNoiseRecords has given me a wonderful outlet to make deeper records.

AAJ: Recently you played a solo set at the Carlo Felice theater in Genova, one of the sacred temples of Italian classical music. How did that concert go?

JS: I had a fantastic day performing at Teatro Carlo Felice. It is an incredible space to craft an evening of solo piano music for a deep-listening audience. The music from that day will soon see a full length release on RareNoise in early 2018. Included in this performance are my interpretations of songs by Bob Dylan, Joni Mitchell, Curtis Mayfield, Stevie Wonder, John Coltrane, Miles Davis, Charles Ives, ZZ Top, as well as some of my original music. I'm thrilled to have a chance to dig in to all this amazing music from the Great American Songbook. And especially in such a special concert space as the Carlo Felice theater.

AAJ: I'm quite curious about your obsession for Bob Dylan, Joni Mitchell and Billy Gibbons? Is It something related to your teenager days?

JS: My obsession with Bob Dylan, Joni Mitchell, ZZ Top, etc. is purely based on the fact that it is great music. I've been a fan of all these artists since i was a young person, but that also applies to Coltrane, Miles, Albert Ayler, Pharoah Sanders, Charles Ives, Arnold Schoenberg, and beyond. To me these are all part of one whole: music. There are no barriers in great music or great art. All is possible at any moment. There are no limits. Just immerse yourself in the music and all will be revealed. Music is powerful.