With a distinctive, highly recognizable tenor voice, an unparalleled catalog of enduring pop and soul classics and an honored place in the pantheon of American music, Curtis Mayfield is without question one of the most influential and beloved artist/songwriters of his time.

Born in Chicago in 1942, Mayfield absorbed the city's rich heritage of blues and gospel music and even before reaching his teen years he had formed his first group, The Alphatones. Later, renewing a childhood friendship with Jerry Butler, he formed a group with three others, brothers Arthur and Richard Brooks and Sam Gooden, all from Tennessee. First called The Roosters the band was soon re-christened The Impressions, who recorded a breakthrough hit, “For Your Precious Love,” in 1958, one of what was to become an almost endless string of Mayfield hit songs to hit high positions on the record charts.

Following Butler's departure for a solo career in 1959, Mayfield re-formed The Impressions with Sam Gooden and newcomer Fred Cash, and almost immediately landed a contract with ABC Paramount Records. Within a year, Mayfield's song, “Gypsy Woman,” reached the top 20 on the charts. The group scored another success with Mayfield's “It's All Right” in 1963, while simultaneously Mayfield was also discharging his new duties at the Columbia Records affiliate Okeh Records, as staff producer. While on this assignment, he was associated with recordings by such stars to be as Major Lance, Gene Chandler, Jan Bradley and Walter Jackson, among others. The Impressions, meanwhile, continued to record Mayfield songs into major hits with such titles as “Talking About My Baby,” “I'm So Proud,” “Keep On Pushing,” “You Must Believe Me,” “Amen,” “Woman's Got Soul” and the immortal “People Get Ready.”

During the late '60s, while continuing at a breakneck pace with his music creativity, Mayfield began to develop an interest in social and political issues of that moment, contributing such songs as “We're a Winner,” a tome to black power and pride which became controversial enough to be banned by a number of pop radio stations.

In 1967, Mayfield co-founded Curtom records, and in 1970 he launched a solo recording career. His first album,”Curtis,” containing such Mayfield classics to be as “Move On Up,” and “(Don't Worry) If There's a Hell Down Below, We're All Going To Go,” reached the top 20 on the charts and was soon followed within the year by “Curtis Live” in 1971.

Later, Mayfield again scored by writing, producing and recording “Superfly”one of the outstanding albums of the 1970’s. Decrying violence and drug use depicted in the film, “Superfly” combined Mayfield's proven music skills with a powerful social consciousness in such hits as the title track for the film and “Freddie's Dead,” both certified million-sellers. The album itself spent four weeks at the number one position on the charts.

During the same year as “Superfly,” Mayfield was the subject of a television profile, Curtis in Chicago, which featured performances by Jerry Butler, Gene Chandler and The Impressions. He also produced the hit soundtrack to the film Claudine, with Gladys Knight and The Pips in 1974, “Let's Do It Again, “ with the famed Staples Singers in 1975, and a pair of albums, ”Sparkle,” and “Almighty Fire” both with Aretha Franklin. Mayfield also appeared on camera with Tex-Mex star Freddy Fender in the prison film Short Eyes. Also during the early years of the '70s, he managed to record a string of well-received albums, including “Back To The World,” “Sweet Exorcist,” “Got To Find A Way,” and “There's No Place Like America Today.”

More albums, ”Heartbeat,” “Between You Baby and Me,” and “Something To Believe In, were still to come as was an exciting reunion tour with The Impressions and Jerry Butler. Then, in 1990, tragedy struck during a rainswept concert in Brooklyn, when a lighting rig, loosened by a high wind gust, toppled onto the stage, striking Mayfield on its way down--he was paralyzed from the neck down.

After several years of drawing deeply on his spiritual reserves, Mayfield regained strength slowly, until an uplifting experience in 1994, when an all-star cast of artists assembled to pay tribute to this great songwriter/entertainer. Warner Brothers Records organized the recording of the album, ”All Men Are Brothers: A Tribute To Curtis Mayfield,” featuring performers including Eric Clapton, Phil Collins, Whitney Houston, Bruce Springsteen. John Mellencamp, Rod Stewart, B.B. King, Elton John, Gladys Knight and Aretha Franklin, among others, all singing vintage Curtis Mayfield material, and highlighted by a rendition of “Let's Do It Again,” by Mayfield himself, marking his first singing performance in the four years since the accident.

Inspired by this eventful album, Mayfield entered the studio on his own again, two years later in 1996 where he produced a new album of original material,”New World Order,” which became one of the most acclaimed productions of his entire career. Both Aretha Franklin and Mavis Staples appeared as guests on the album. This album was nominated for 3 Grammys.

Curtis Mayfield died in 1999, shortly after learning of his induction into the Songwriters' Hall of Fame.

William Parker - I Plan to Stay a Believer: The Inside Songs of Curtis... 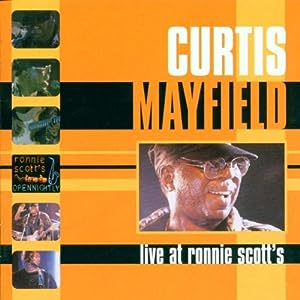 All About Jazz musician pages are maintained by musicians, publicists and trusted members like you. Interested? Tell us why you would like to improve the Curtis Mayfield musician page.