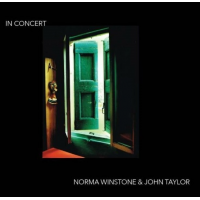 When John Taylor died on 17 July 2015, aged 72, the jazz world lost one its finest pianists. Over the course of his career he recorded with the likes of Arild Andersen, John Dankworth, Peter Erskine, Gil Evans. Jan Garbarek, Mike Gibbs, Charlie Haden, Lee Konitz, Enrico Rava, John Surman, Steve Swallow, Miroslav Vitous and Kenny Wheeler. He was also a mainstay of the British and European jazz scenes.

Norma Winstone (aka "Britain's best kept secret") is one of the UK's finest jazz vocalists; in addition to the twenty-plus albums made under her own name or as co-leader, she recorded with Wheeler and Taylor in their Azimuth trio and on Wheeler's own major recordings, Song For Someone (Incus, 1973) and Music for Large & Small Ensembles (ECM, 1990). She also appeared on seminal albums by Joe Harriott, and Amancio D'Silva's Hum-Dono (EMI Columbia, 1969) and Ian Carr's Labyrinth (Vertigo, 1973). Her own Edge Of Time (Argo, 1972), recorded with Taylor and the cream of British jazz, was a particularly impressive debut album.

This archival release was the result of an August 1988 concert given by Taylor and Winstone at the Guildhall School of Music and Drama scheduled with very little prior notice. Winstone's impressively fluid scat singing is evident throughout, particularly on numbers such as "Ladies In Mercedes," "The Glide" and "In Your Own Sweet Way," accentuating her natural talent for extemporisation and deploying the voice as an improvising instrument. Taylor's percussive "Coffee Time" is almost burlesque in its eccentricity, with Winstone entreating the audience to join in with handclapping and evincing some of her most wild scatting. The main piano part is a catchy Latin-esque sequence that modulates swiftly and frequently. Winstone's wondrous sustained high G, arriving within the final minute of "Celeste" is a magnificent example of her peerless vocal talent. What In Concert demonstrates above all else is the extraordinarily synergistic relationship that this virtuosic pair shared.

Lucky To Be Me; Ladies In Mercedes; Cafe; The Glide; In Your Own Sweet Way; Round Midnight / Midnight Sun; Coffee Time; Celeste.