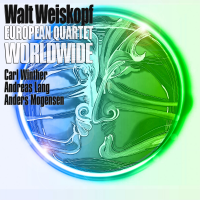 These days a lot of jazz records seem to require a musical concept or an idea that unites the compositions on the album, but it doesn't have to be so complicated. After a tour in January 2019 with his European Quartet, tenor saxophonist Walt Weiskopf went into a studio in Copenhagen with the band, and a few hours later the music on the album Worldwide was in the can.

It sounds simple, but it also says something about the level of musical communication that goes on in the quartet. The ability to deliver on the spur of the moment doesn't come after a few days of playing together. The musicians have known each other for some time. Back in 2018, they released European Quartet on Orenda Records, and since then their sound has remained tight.

Although Andreas Lang has replaced Daniel Franck on the bass, drummer Anders Mogensen and pianist Carl Winther remain from the original line-up, and they support Weiskopf congenially. Winther can be both romantic and rhythmically inventive, sometimes recalling the powerful elegance of McCoy Tyner, while Mogensen drives the music forward with a light but insistent touch that brings out all the colors in the cymbals.

Weiskopf delivers the bulk of the material with eight original compositions, but one of the two covers shows where he is coming from. The reading of Tadd Dameron's "Soultrane" points to John Coltrane's influence and his presence is also felt on "Back in Japan," which draws on the saxophonist's late style.

The compositions on the album come across as distinctive and varied, spanning the energetic hard bop vamp of "Coat of Arms" and the soft touch of bossa nova on "Back in Brazil." On the other hand, "Entebbe" sports a repetitive rhythmic piano motif reminiscent of Steve Reich. There is also a nod to the standards with the mid-tempo ballad "Marcie by Moonlight," a rewrite of "Stella by Starlight."

With worldwide in the title, and references to Japan, Scotland, Russia, Africa and Brazil, there is in fact a vague geographical concept behind the album. However, it is just an excuse to play a varied repertoire. Worldwide is simply a great modern jazz album, nothing more, nothing less.