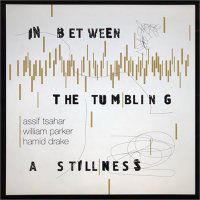 As the saying goes, In Between The Tumbling A Stillness, recorded in 2015 in Tel Aviv, "comes in like a lion and goes out like a lamb." Saxophonist Assif Tsahar, who sticks to tenor throughout, opens "In Between" like a lion, if that lion were Albert Ayler. The 35-minute piece draws from the fire music of the 1960s, propelling forward with an energy that is indefatigable.

Credit to bassist William Parker and drummer Hamid Drake. The dynamic duo have been the power source for saxophonists from Fred Anderson to John Dikeman, Charles Gayle, and Peter Brötzmann. While the saxophonist has performed with each of his bandmates before, the three had never recorded as a trio. The combination here is quite effective. Drake is (as ever) happy to illustrate the sounds with varied styles from reggaeology to swing, rock, and free drumming. Tsahar's tenor approach sounds like a complement to that of the Brazilian born Ivo Perelman. While the latter works the upper register, Tsahar mines the bottom to great effect.

Dare we say that fragments of Lester Young's horn can be heard here? "A Stillness" is the "out like a lamb" companion to the roaring opener. Tsahar soothes the ear on this brief and breathy epilogue.