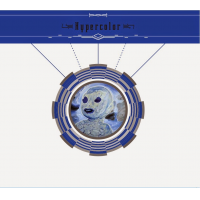 The past few months have seen a stream of truly—and in some cases mind-bogglingly—wonderful guitar-centric power trio albums. Yet, the eponymous debut of the Brooklyn-based avant-jazz-rock band Hypercolor stands out, but not for the reasons you'd think. Sure, the trio consists of musical brainiacs James Ilgenfritz and Lukas Ligeti; genre omnivores whose own work and collaborations draw as heavily from the worlds of free improvisation, contemporary classical, various ethnic musics, and art-rock as they do from jazz. How guitarist Eyal Maoz, best known as one of the most distinctive young musicians in John Zorn's orbit, has remained an underground sort of figure is beyond me. Like his bandmates, his playing is distinctive and virtuosic, and his recordings to date have been consistently fresh and restlessly eclectic. Take, for example Hope and Destruction (Tzadik, 2009) which successfully fused traditional Yiddish melodies and modern metal with the hyperactive rhythms of 70s disco-funk.

Hypercolor is similarly eclectic. The trio eliminates the overt references to dance music, and replaces them with a punkish sort of old school jazz-rock energy. The album is rife with the sort of strutting attitude that made Tony Williams' Lifetime (in all of its concatenations) so much fun to listen to. The end result, though, is more along the lines of Fred Frith's great trio, Massacre, or perhaps the Nels Cline Singers. The tunes themselves are not overly complex. Pretty much all of them have these incredibly striking and memorable melodies, riffs and sequences that emerge and dissipate organically. Though the individual performances throughout the album are uniformly excellent, the real star of the show is the interplay between the three virtuosi. Ligeti seems to be the Lenny White of the avant-garde scene: mega chops are on hand, but take a back seat to taste, flow, and humor. Ilgenfritz' 5-string bass echoes Bill Laswell's sub-basement bottom end. But it's not a gimmick; his abyssal ruminations add dimension and space, and contrast with the crisp, trebly guitar and drums in an additive sense. Maoz' playing is gloriously all over the map. "Transist" is a surf-tinged bluesy howl, the combination of Hendrixian grit and sweet lyricism on "Little Brother" echoes Nels Cline, and the twangily piquant opening line of "Forget" reminded me a little of something that Richard Thompson might play; until Maoz takes the tune in a completely different direction. Free-ish jazz skronk pops up on "Ernesto, Do You Have A Cotton Box?" while the sharp tutti passages of "Far Connection" are repeated in a variety of interesting ways as Ilgenfritz, and then Maoz, cut loose. The pensive quiet that envelops "Quixotic" suggests any number of ECM recordings, but there's a humor and athletic energy here that rarely seems to crop up on the august label's recent productions.

The band's name, oddly enough, refers to a now-defunct line of leuco-dyed clothing that changed color in response to the wearer's body temperature. Sort of like a full-body mood ring. The parallel is obvious. One gets the sense that these tunes are never played the same way twice. This is malleable, bendable music: the sort that grows and evolves and changes and adapts to its surroundings.