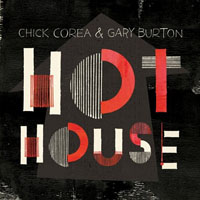 With a partnership lasting longer than most marriages, pianist Chick Corea and vibraphonist Gary Burton know what it takes to keep things fresh. Since the release of Crystal Silence (ECM, 1973), they have toured virtually every year, but record far less frequently, with only six albums to their credit, most recently The New Crystal Silence (Concord, 2008). With the pianist especially busy these days—his The Continents: Music for Jazz Quartet & Chamber Orchestra (Deutsche Grammophon, 2012) just out and a live set from his 2011 Return to Forever IV tour, The Mothership Returns (Concord, 2012), on the near horizon—anytime Corea enters the studio with Burton is worthy of celebration.

Traditionally, the duo has focused largely on music from the pianist's pen and from Burton collaborators like bassist Steve Swallow and composer/arranger Michael Gibbs. Shifting gears for Hot House, the pair covers music from the 1940s through the 1960s, by well-known names ranging from pianists Art Tatum, Bill Evans, Dave Brubeck, Tadd Dameron and Thelonious Monk to The Beatles' Paul McCartney and Antonio Carlos Jobim—though the songs chosen by the vibraphonist and pianist are a little further off the beaten path.

While not exactly unfamiliar, "Eleanor Rigby" hasn't received much interpretation in the jazz world. Still, after Tatum's jovial opener, "Can't We Be Friends"—the pianist moving from facile swing to strong-handed stride—it demonstrates Corea and Burton's seemingly effortless ability to draw music from external sources into their own complex yet accessible musical universe. A relentless left-hand pattern gives the song a far brighter pulse than the original, with Corea's right hand mirroring Burton before leading to a solo that demonstrates how, as he approaches 70 in 2013, the vibraphonist has lost none of his impeccable ability to shape flawless long-form narratives with exhilarating spontaneity. Corea, too, solos with the same kind of reckless in-the-moment spirit.

Two Jobim tracks run the gamut from the effervescent "Chega de Saudade" to "Once I Loved," which begins in ethereal atmospherics, but assumes a more propulsive stance in short order. It's no surprise to hear Corea play with quirky tongue in cheek on Monk's "Light Blue," but Burton is equally idiosyncratic, while a relatively brief look at Dameron's fiery title track is the result of Burton and Corea being uncertain as to who is to solo first, with a result that's all the more impressive for their ability to interact in rapid-fire fashion without ever stepping on each other's toes.

Two Corea originals close the set: "My Ship" has been expanded significantly from Expressions: Solo Piano (GRP, 1994), a brief descending pattern redolent of "Falling Alice," from the pianist's The Mad Hatter (Polydor, 1978). Augmented by The Harlem String Quartet, the episodic "One for Mozart" harkens back to the duo's Lyric Suite for Sextet (ECM, 1982), while presaging the duo's next CD, which will return to that expanded format.

Another CD already in the planning stages is terrific news from one of the longest-lasting partnerships in jazz. Familiarity needn't always breed contempt and Hot House proves it needn't spoil the thrill of discovery either—or the ability to just have some flat-out fun.