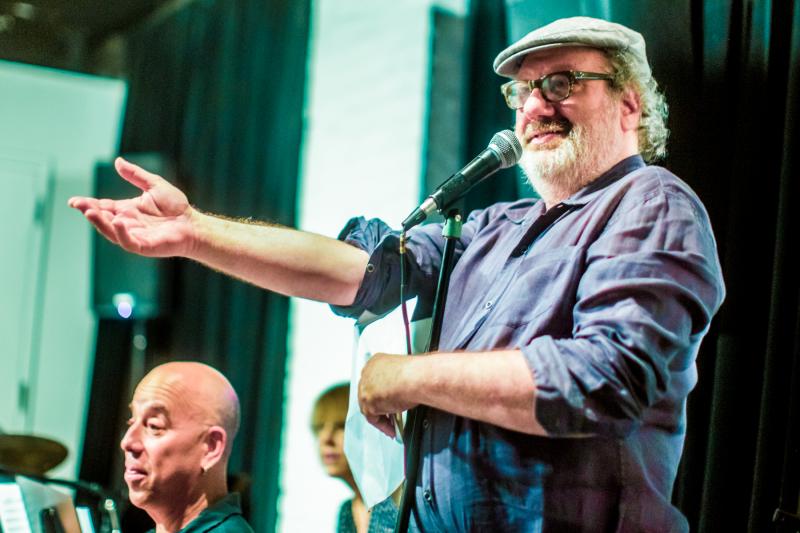 Hal Willner spent six nights in residence at The Stone, presenting two sets each evening. This Philadelphian producer has immaculate taste, as illustrated by his greatest achievements: a series of conceptual albums that feature a host of carefully selected artists, assigned with the task of addressing the music of a chosen composing giant. There was That's The Way I Feel Now (Thelonious Monk), Lost In The Stars (Kurt Weill), Weird Nightmare (Charles Mingus), and his first homage, in 1981, to Nino Rota, the Italian composer known for his Federico Fellini movie soundtracks. This last was revisited on the opening night of the Stone residency.

With many of the players on the original album now deceased, or otherwise unavailable, Willner assembled a starry creaming of today's hot NYC players, with fresh charts penned, but the original spirit observed. Steven Bernstein acted as musical director for most of the week, and had written a new arrangement for "Amacord." A soft-circus lope featured some sprightly awakenings, as the tune developed a bouncing New Orleans gait, with spirited solos from Brian Drye (trombone), Doug Wieselman (clarinet) and Curtis Fowlkes (further 'bone). A ska-gypsy feel developed, with another Wieselman solo, a conclusion reached via a sensitive Lenny Pickett tenor saxophone statement. Guitarist Giancarlo Vulcano provided arrangements of two pieces from Casanova, and then Rota's theme from The Godfather was the odd Francis Ford Coppola tune out, with Karen Mantler providing the arrangement. She also contributed some spine-tingling harmonica, impersonating an accordion, and sending visible waves of both adoring recognition and deep appreciation throughout this full-up Stoner crowd. Across gentle piano, soft bass and percussion, Fowlkes delineated the main theme, and smiles beamed around the audience, and around the ensemble too, Mantler's organ swelling up to a low Marcus Rojas tuba note, to conclude. It was uphill to the end, from that point, with distinctive readings of "La Dolce Vita," "Roma," and "8 1/2," Mantler representing her mother Carla Bley on this one, who had dug out her arrangement from the original album. The cocked hat swagger of "La Strada" was a fine way to finish, a jolly jape, with prominent xylophone chimes to assist its romping. Rota's music was perfectly interpreted, very much in the spirit of the originals, but with burnished details provided via the fresh arrangements and the wonderful ensemble's individualist expression, not to mention a pervading sense of good humour, led by Willner and Bernstein.

The next night saw a very different project, presenting beatnik classics Word Jazz (Ken Nordine, 1957) and How To Speak Hip (Del Close & John Brent, 1959). Very much of their time, we could laugh at, and with, these zany observations of original hipster- speak. Reader Willner was joined by Adam McKay, Steve Higgins, and in an unusual stand-up role, Laurie Anderson (although she was actually sitting down, and also playing the violin). In-between the wordy pieces, there were several fleeting instrumental themes, creating a fast- moving revue feel. Steven Bernstein was directing again, and the pianist of the evening was Terry Adams, of NRBQ fame. Willner described this first set as being a 'reading,' with the second set intended as a 'run-through,' and "the real show will never happen." he laughed. In reality, though, this first performance sounded very much like a full-quality finished entity. Bernstein was, unusually, on flugelhorn, and Willner read "What Time Is It?," followed by Anderson intoning whilst munching on potato chips, with extreme amplification. She's 'hungry in the middle of the night,' moving onto olives and crackers, insatiably nibbling. McKay and Higgins prompted guffaws from both audience and colleagues, the humour in Hip still vibrant nearly 60 years down the line. Willner did a duo skit with Adams, and this triumphant set closed out with further chortles, as "The Loose Wig" and The Vidiot" were exhumed, one from each of the selected vinyl originals.

A less well-travelled and resilient humour was revived two nights later, as Willner returned to his 2004 stage production Let's Eat: Feasting On The Firesign Theatre. This was a much looser performance, not benefiting from its anarchic nature. The audience was much smaller for this rather specialised re-visit to the old Firesign repertoire, radio shows and LPs from the late 1960s and early '70s, their populist counter-culture heyday. In this instance, the material hasn't dated so well, prompting thoughts that it would help if the listener had actually been around, and on this scene, five decades ago. Unlike the Hip/Word Jazz evening, this one suffered if the punter didn't connect with the satire, and also featured much less music to keep the unbelievers occupied.

Saxophonist Colin Stetson has worked in an improvising trio with bassist Trevor Dunn and drummer Greg Fox, which acted as a forum for some of his most enervating extremities. The level at which this threesome worked, in terms of momentum, sustain and sheer monstrous blow-out power was a physical strain on Stetson, particularly when hefting his mighty bass saxophone. Now, here's another outfit, with Ex Eye once again teaming Stetson and Fox, those two joined by Shahzad Ismaily (bass-heavy Moog) and Toby Summerfield (cranked-up guitar). It also seems like the pieces are composed, although the more detailed, arranged passages are clearly open to freedom, and aren't shatter-proof.

This Poisson gig wasn't so well attended, but perhaps folks didn't spot the Stetson involvement, as he's normally a big draw. Also, he has been playing in town a few times recently, in various settings. Even so, with the audience gathered close, intense dynamism was instantaneous, with crushing extremity being shaped by tilting themes and phases, all four members firing fully. Fox's drumming was fast-stuttering and precisely targeted. Ismaily's basslines throbbed with gargantuan mass. Sadly, the saxophone was frequently dominated by the drums, Moog, and especially guitar, in the mix. Your scribe was indeed standing in the direct path of Summerfield's guitar amplifier, but a quick dart to several other ear-vantage points confirmed that the p.a. system was having trouble boosting Stetson to the necessary power-levels. Perhaps it was the danger of unwanted feedback that governed the situation. Perhaps Summerfield should have just turned down his immense #11 volume. This situation didn't derail the music's excitement, but it would have been better if Stetson had been allowed an equal voice, even if a wall-of-sound was frequently Ex Eye's method of attack.

This show combined uppers and downers. The august institution that is the Downtown Music Gallery is celebrating its 25th anniversary, as well as this evening performance marking the birthday of head honcho Bruce Gallanter. But the event was also a benefit for that beleaguered Chinatown basement den, in a market climate that has seen its fellow record stores closing down on a regular basis. Few are now managing to survive.

The night opened with Zion 80, a large 11-piece band that concentrates on the repertoires of John Zorn and Rabbi Shlomo Carlebach, through a conduit of stomping, careening, psychedelic style-graftings, possessing their own band vocabulary of excess. Here, they flicked through the pages of Zorn's Book Of Angels, with a series of tunes that were penned with Zion 80 in mind. The musical phases were many, a woozy deep sea dub ripped through by the bullish horn ranks, which included a pair of baritone saxophones in its membership of five. Two major elements are klezmer and Afrobeat, but there's also an abundance of effects-loaded guitar solo freak-outs, many of them by band leader John Madof. Frank London muted his trumpet crackle for a solo, then removed it to blow heavenwards. London's Klezmatics fellow Matt Darriau was also in the ranks, playing alto saxophone. Two flutes fluttered over a reggae groove, before the terrain changed into klez-metal, a stormer with a row of vocal harmonies, just before the guitar mayhem broke out, followed by a drums-and-percussion breakdown, interspersed with horn section stabs.

Bill Laswell's Method Of Defiance were almost as bulky, featuring eight players, again dedicated to various groove-types, mostly dubby. They hit the ground running, dropping into a speeding drum'n'bass 'scape, decelerating to sludgy reggae, Dr. Israel toasting through a veil of distortion. Following this strong start, they began struggling for momentum by the third number, not quite gaining lift-off. An ambient piece emerged, with faint DJ Logic scratching, harmonic bass and soft cornet susurrations from Graham Haynes. Developing a pulse, Josh Werener switched from keyboards to bass, as Laswell took a break, returning to play up at the higher end, with guitar-like tones. Guitarist Mike Sopko guested, but he mostly seemed hesitant and tentative, even when the rest of the crew were trundling confidently. This set held examples of successful locking-in and not-quite-there wandering, but this is the risk that Laswell takes when he's operating on an instant-groove, collective brainstorming level. The rewards can be high, but sometimes the parts don't quite intersect.

Sadly, Brandon Seabrook had left his banjo at home, only bringing out his guitar for the debut of this new band, Die Trommel Fatale. The Greenwich House Music School has a stage in its concert room, but Seabrook elected to set up front of it, down on the floorboards. This was fine if a viewer was sitting on the front row, but might have presented visibility problems for those towards the rear. Anyway, the music sounded very well-rounded in this room's acoustic fold, the combo's scattershot assault captured and contained, particularly as the band's two drummers melded or staged violent exchanges from their opposite sides. The line-up is unusual in other ways, including Marika Hughes (cello), Chuck Bettis (electronics and voice) and the sensible pivot of Eivind Opsvik (bass).

This was yet another example of highly controlled composition that contained elements which sounded uncaged, anarchic and frenzied. There were no cymbals on either drumkit, just hi-hats. Bettis created a low electronic hum before the rest of the band kicked in, twitchy, serrated and angular, but with wafting cello atmospherics. Such alternation between serene and jagged usually satisfies. Bettis treated his voice, made like an Inuit chorister, and sticksman Sam Opsovik probably had an Edgard Varese percussion sound in his head whilst soloing. It's easy to see what's on Seabrook's mind, as he mouths his every guitar phrase, as if he's a frustrated vocalist. Bass and cello were bowed in unison, brushes on skins, heading towards another introverted patch, but the next detonation was only just around the corner, Seabrook being a master of controlled demolition explosions.