Matt Darriau, saxophonist, clarinettist, ethnic-woodwind specialist and composer, Darriau has made several innovative contributions to the New York music scene. His background in the fertile and eclectic milieu of the New England Conservatory of Music's Third Stream Program in the 80's, and the continued practice of Balkan, Klezmer and Celtic folk idioms, have helped shape his aesthetic and passion for creating new and unusual music. He has been awarded grants and commissions from the NEA, Chamber Music America (2005/7) and is a Grammy winner (2007) with the Klezmatics. Jazziz magizine selected him as one of the 150 most influential jazz musicians of the last fifteen years, for the impact he has had in bringing Balkan and world rhythms to jazz with his band Paradox Trio

European Jazz Conference 2022 Toplo Centrala Sofia, Bulgaria September 22-25, 2022 More than 300 professionals, representing 180 member organizations from 38 countries, came together in the Bulgarian capital, Sofia, for the eighth annual European Jazz Conference. The event is organized by the Europe Jazz Network, an organization founded in 1987 ...

Paradox Trio - The Balkan Side of Downtown NYC

At some point in the '90s Balkan-tinged jazz was all the rage in the downtown scene that gravitated around the Knitting Factory and the Bell Café. Whereas many of the bands that were at the forefront of that movement are gone, a quarter century later, the Paradox Trio and its unique blend of jazz and creative ...

[ Editor's Note: The following interview is reprinted from George Colligan's blog, Jazztruth] David Fiuczynski is a very unique guitarist. Many of you know him from his successful band called Screaming Headless Torsos. He's played with Hasidic New Wave, trumpeter Cuong Vu, and pianist Hiromi. I first met David at a rehearsal with drummer ... 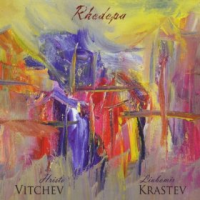 Bulganin modern jazz guitarist Hristo Vitchev resides in the Bay Area and alternates between a variety of jazz formations. On Rhodopa, which is a mountainous region in Bulgaria (named after the character from the Greek mythology known also as Hera, sister of Zeus) he teams with clarinetist Liubomir Krastev who shares with him Bulgarian roots on ...