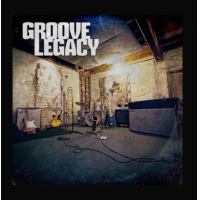 Built around the core of saxophonist Paulie Cerra, keyboardist Billy Steinway and bassist Travis Carlton (son of legendary guitarist Larry Carlton), Groove Legacy is just as much a sound and feel as it is this band and the title of their eponymous debut. Although they've collectively played with everyone from Al Green through Stevie Wonder to Carrie Underwood, this debut shares the trio's mutual passion for the sound of 1970s jazz-funk—Creed Taylor's seamless, sparkling productions for CTI Records, The Meters, Stuff, and especially The Crusaders.

"Ever since I had the pleasure of working with The Crusaders, I fell in love with the tenor and trombone melody blend," Steinway explains. "I can't think of a better group of musicians than Groove Legacy to recapture that sound—also putting a fresh spin on instrumental music." Highlighted by contributions from trombonists Andrew Lippman and Lee Thornberg, drummer Lemar Carter, plus several guitarists, Groove Legacy honors and consolidates this sound but keeps it moving forward, too.

"Odd Couple" is only one example of Groove Legacy's mastery of the classic Crusaders sound: Bright and sharp yet a little bit funky and round (and more than a little soulful around the edges), with the combined horns singing as a single voice; Ceara's tenor sounds as big as Texas and cuts as sharp as a cowboy's spurs while bassist Carlton and drummer Carter keep its rhythm rolling and tumbling.

Cerra and Travis Carlton co-wrote "Cornell" to feature Larry Carlton (Travis' dad) surfing on a tune assumedly written to honor legendary groove guitarist Cornell Dupree, who held down the guitar chair in Stuff. While the rhythm section gently lays down a Memphis groove, like the instrumental track behind a lost Al Green single, Papa Carlton's guitar dominates this piece with his twangy and tangy tone. Next comes "The Know It All," which featured guitarist Robben Ford slashes through in a more spindly and sharp, Albert King blues-rock style.

The sound of Memphis also comes through the rhythm, sound and feel of "Memphis 40 oz. Hang," a leisurely groove that sounds cut straight from a Stax Records session by Booker T. & the MGs with The Memphis Horns, and which pours nicely, with a sharp, robust body and creamy, foamy head.

Frank Malfitano's stylish liner notes describe Groove Legacy as, "It's the 'If Stuff and the Crusaders had a baby' band." There's no better way to say it.