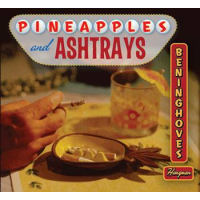 Picture an imaginary drive-in theater at the edge of a cliff. The movie is an assortment of grainy black and white vignettes of spaghetti westerns, furtive foreigners smoking, and retro surfing footage. The soundtrack is Pineapples and Ashtrays, performed by Beninghove's Hangmen. These guys play what they call 'creeptastic surf noir,' which defies further definition, but makes interesting listening.

The man behind this eccentricity is Bryan Beninghove, a versatile multi-instrumentalist, who is admittedly out to have fun while making complicated music. This is the third release of the Hangmen, and they are taking it over the top. "Astronete," possesses the mysterious Spanish tinge, with a rugged dose of power blues, but it's the horn attack which is the propulsion. The visually enhanced "Pineapples and Ashtrays," presents trombonist Rick Parker leading the way down into the cellar lounge, where the colored drinks have the little umbrellas. The guitarist with the flowered shirt is on a surf trip to the Hawaiian islands, smoke fills the room, the bartender awaits last call.

A reggae infused tempo takes "Lola Gotta Gun," into a vortex of cinematic drama, with snippets from songs that are unknown, yet sound familiar. Strains of gypsy jazz manouche carries "La Girafe," past a French carnival barker, into a sunny park with children playing and people taking sun. There is a soul dimension to "Roebuck," that displays the best in the horn arrangement, moving straightforward along the southern highway, with a great blues sax solo by Beninghove.

"Elephant Stampede," brings out the heavy metal guns, as guitarists Dane Johnson and Eyal Maoz, show their affinity to Jimmy Page and other guitar heroes. As if to show how twisted minds produce amidst controlled chaos, Neil Diamond's "Girl, You'll Be Woman Soon," actually adheres to the original parameters, but veers off into a psychedelia free-fall, before coming back up for air. The final cut "Terminator," takes polytonal twists and turns as the screaming trumpet of Jonathan Powell turns the rave way up past the threshold of sanity, the rest of the band follows suit. The do not go gentle into the night.

This music blurs the lines of what should be. Beninghove's Hangmen are all accomplished jazz musicians, but are attracted to the bizarre, and avant-garde. As one deconstructs the layers of music, attempting to make sense of it all, it flows along, like a raging river after a heavy rain. Though not intended for everyone, those lost souls brave enough to try, will find these guys can play at a depth just out past the reef. Where things get really weird.