George Benson at the NYCB Theatre at Westbury 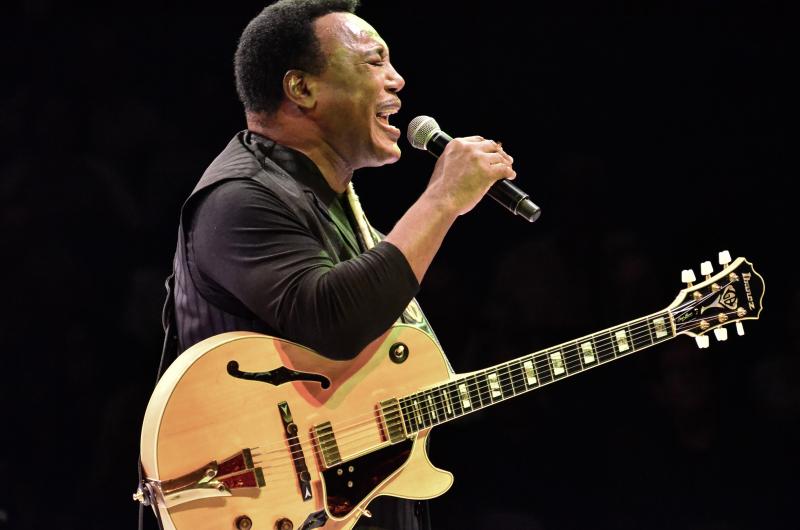 George Benson is a multi-platinum (R.I.A.A. certified), best selling, Grammy Award-winning guitarist and singer-songwriter. In 2009, Benson was recognized by the U.S. National Endowment of the Arts as a Jazz Master, the country's highest jazz honor. Benson was born and raised in the Hill District in Pittsburgh, PA. A child prodigy, at 8 years of age, he was playing guitar in an unlicensed nightclub on weekend evenings. In 1953, at the age of 10, Benson, under the name "Little Georgie," released his first single ("She Makes Me Mad') for the RCA-Victor label. In the early 1960s, he was playing jazz and soul with Brother Jack McDuff and others. In 1964, at 21, he released his first solo album, The New Boss Guitar on Prestige Records. Over the course of his career, Benson has played with, guested on albums by, or toured with Miles Davis, Chet Atkins, Al Jarreau, Freddie Hubbard, Stevie Wonder, Minnie Ripperton and Stanley Turrentine. His solo recordings have featured a virtual who's who of musical guests including: Lonnie Smith, Ronnie Cuber, David Paich, Steve Lukather, Lee Ritenour, Marcus Miller, Wynton Marsalis, Sonny Fortune, Idina Menzel, Till Brönner, Bennie Green, Hank Jones, Ron Carter, Randy Brecker, Jack DeJohnette, Billy Cobham, Earl Klugh, Herbert Laws, Kenny Barron and Herbie Hancock as well as McDuff and Hubbard.

Benson is a celebrated and versatile musician. He can seamlessly move from smooth jazz, to R&B and back to straight forward jazz. His guitar playing is flawless. He can play lead or rhythm and can fit in-the-pocket with the best of them weather playing jazz, pop, funk or soul. He is blessed with a smooth soulful singing voice and he has a knack and a way with his vocal delivery.

Over the years, he has stayed busy recording for numerous labels including: Prestige, Columbia, Verve, A&M, Warner Bros., Qwest, Concord, CTI and GRP. His most recent studio albums have been released on Concord Records, including 2009's Songs and Stories, 2011's Guitar Man (his first primarily instrumental album in 35 years) and 2013's Inspiration: A Tribute to Nat King Cole. In 2015, Rhino Records released The Ultimate Collection. At 72-years-old, there is no end in sight as he continues to record and tour.

Queens-born and Long Island-bred, Chrisette Michele (given name: Chrisette Michele Payne) is an R&B singer/songwriter with a big voice. She can stunningly sing jazzy Billie Holiday-influenced torch songs and ballads as well as gospel, Brazilian jazz and slow-burning R&B.

She studied vocal and jazz performance at Five Townes College in Dix Hills on Long Island and soon began performing at open mike nights and going on auditions. She was discovered at the Village Underground in New York City by India.Arie. Michele was soon performing as Aire's opening act.

Def Jam records signed her to a contract in 2006, and in 2007 the label released her debut CD, I Am. Michele wrote all the songs and worked with Babyface, Salaam Remi, John Legend, and will.i.am. It was an auspicious debut. The CD debuted at number 29 on the Billboard 200 Chart. In 2009 she won a Grammy Award for Best Urban/Alternative Performance for her song "Be OK" from I Am. Her second CD, Epiphany (Def Jam, 2009) debuted at number 1. Her subsequent releases have all performed well. 2010's Let Freedom Reign (Def Jam) reached number 25 on the Billboard 200. Her 2013 Motown Records album Better climbed to number 12 on the Billboard Charts. She recently left Motown to form her own label, Rich Hipster. Michele's next CD is scheduled to be released on Rich Hipster in November, 2015.

Michele performed first. Her show was much more than that of a placeholder or a warmup act. It was a homecoming and on any other night would have been that of a powerful headliner. Appearing in a stylish grey pants suit and sky-high heels along with two backup singers, the singer dominated the bare stage as she performed to a recorded backing track. She began by explaining that she was "a local girl from Queens. We moved to Islip, then to Patchogue and then Selden...and then I went to Five Towns College." What followed was a tour de force performance that included "Epiphany (I'm Leaving)" and "Soopa" which was dedicated to the members of the audience, after she asked if "you think you're one of the most amazing people, put your hands together."

Michele was in excellent voice and was clearly happy to be performing in her own backyard. She delivered strong performances on "Blame It on Me," Love Won't Leave Me Out" and "But I Do" (which was dedicated to anyone who ever has been in love). She was also quite talkative and funny. After one song, she quipped, "You guys have a very sophisticated clap. I can tell that you love good music." He short but formidable concert ended with a commanding threesome of songs—"Charades," "Better" and the new song, "A Couple of Forevers," which she explained would be on " the new album, coming out soon...Milestones, on my own record label, Rich Hipster, which just got signed to Capitol Records."

Her performance received a loud and long standing ovation. And, just as quickly as she appeared, she was gone (though she had to have a little help finding her way back to the dressing room as the venue's revolving stage made finding the proper aisle a little more difficult than expected).

After a short intermission, George Benson was introduced. The loudspeakers blared, "Ladies and gentlemen, please welcome ten-times Grammy Award-winning artist, George Benson." With the band situated offstage in the pit, Benson, dressed sharply in a dark suit with understated striping, was led down the ramp to the center of the arena where he was the only one on the revolving stage. It was just him, his guitar and guitar stand along with his microphone and its stand.

Benson played guitar and sang with all his heart. The mostly middle-aged crowd in the sold-out arena, set up in an "in-the-round" configuration, got exactly what it hoped for—an evening of jazz, soul, R&B and pop delivered by a master musician. In addition to the Grammy-winning single "Gimme The Night," Benson and his band played songs from all aspects of his long and legendary career, as well as covers of Nat King Cole ("Nature Boy"), Donnie Hathaway ("The Ghetto") and the Drifters ("On Broadway"). Benson also played the traditional "Danny Boy" prior to which he announced, "I found out my grandfather was Scottish-Irish. I can't find it when I look in the mirror. I was recently in Scotland in Edinburgh." He pronounced the name of the city in a deep Scottish brogue and continued, "They'll run you out of town if you pronounce it phonetically. They told me don't do us any favors; we don't want to hear any 'Danny Boy.' I said, 'You want to hear how jazz people do it? We're gonna mess it up!'" The version he picked on his guitar was a very untraditional jazzy rendering of the song. It was in one way very familiar and in another, an extremely experimental interpretation. After the applause had died down, Benson paused and said that he then told the Scotsmen that "I am bonafide Irish, now."

The performance had many highlights. "Love X Love" had people dancing and groovin' to the tune from the top to the bottom of the venue's steeply pitched aisles. Prior to "In Your Eyes," Benson addressed the crowd in the heartfelt and friendly way that one would speak to an old friend, "Westbury, so glad to be back on the island. The traffic is still the same...How do you like my band?" After the applause died down, he crooned the ballad from the 1983 Warner Brothers album of the same name, sans guitar. "Nothing's Gonna Change My Love For You" was introduced as a song "written by Michael Masser, the same person who wrote 'In Your Eyes.' He's left us, but we have this top remember him by." During the funky "Turn Your Love Around," the spry and limber septuagenarian danced his way across the stage and put his hand to his ear to get the audience to participate on the choruses. "In Your Eyes," sung as a duet with his conga player, Lilliana, was followed by an beautiful version of "Kisses In The Moonlight" from While the City Sleeps... (Warner Bros., 1986).

As the evening was coming to a close, some members of the audience—emboldened, perhaps, by having a few too many, perhaps by Benson's folksy and friendly demeanor, or, perhaps, by the love songs that he and his band had served up—took it upon themselves to join the guitarist onstage. One fan came tottering onto the stage in a short dress and high heels seeking a kiss. Another gentlemen jumped on stage with a pad and a pen seeking an autograph. Security quickly whisked them both back to their respective seats.

Benson's last four songs would have been enough to satiate even the most jaded concert-goer. "The Ghetto," from Absolute Benson (GRP/Verve, 2000) was followed by a sweetly sung version of "Nature Boy," which was originally released by Benson on In Flight (Warner Bros., 1977). His celebrated version of "On Broadway" was something to behold. The song was played perfectly with the audience hanging on to each note. The song also featured a drum solo that afforded Benson an opportunity to take a seat for a moment, rest, grab a drink of water and catch his breath. As soon as the solo came to its conclusion, Benson was back on the slowly revolving stage and ready to finish the show.

And finish it he did. The bouncy "Gimme The Night," from the 1980 Warner Brothers album of the same name with its disco-ish feel (after all, it was produced by Quincy Jones), brought the spectators to their feet and had them again bopping their way down the aisles toward the stage. By the end of the song, many members of the audience had congregated at the end of the aisles and were dancing crowded together at least three rows deep.

As the song ended, Benson took his bows, promised he'd return and wished the audience a good night. With that, he was headed back up the ramp from the small stage in the center of the venue. The lights came up and it was over.

George Benson can transfix an audience with the sight and the sounds of his fingers dancing across his signature Ibanez guitar. He can do the same with his smooth and resonant voice. The man can sing like Donnie Hathaway, Nat King Cole and Stevie Wonder. He can also scat sing à la Cab Calloway. On this night, at the intimate NYCB Theatre at Westbury, all of his talents were on display.