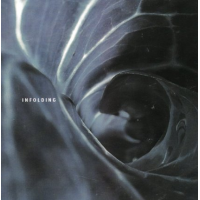 As a Professor of Jazz (Drums/Percussion) at the Royal Academy of Music in London, and as contributor to recordings and performances by Lee Konitz, Dave Holland, Bill Bruford's Earthworks and other progressive jazz thinkers, drummer, composer and bandleader Martin France is accustomed to deep and heady jazz waters. In Spin Marvel, France teams up with two of Norway's most exploratory progressive jazz musicians, electronic sound sculptor Terje Evensen and electronic/electric trumpet pioneer Nils Petter Molvaer.

Infolding captures Spin Marvel's debut. "It was recorded live in a four hour session for the BBC," France reveals. "We were all very happy with the session and how the music was sounding so I forwarded the master files to producer Emre Ramazanoglu, who then worked with the music and produced it for us."

To borrow illustrations from another culture, Infolding is as complex and detailed as the art of origami yet as massive and uncompromising as Mount Fuji. Evensen and Molvaer open "Canonical" with electronics and trumpet that sound like an extraterrestrial communication from a civilization in distant space, floating in free time, until Tim Harries' rampaging bass and France's drums storm in.

In "Tuesday's Blues" and "Two Hill Town," France's explosive playing on his snare and cymbals honor the sound and spirit of drummer Elvin Jones, linchpin of some of John Coltrane's most ferocious rhythm sections. Moelvar's trumpet sings "Tuesday's Blues" in blue sound and feeling but frozen and fractured, with ice where its soul might once have been. "Two Hill Town" ping-pongs across its rhythmic pulse but then grows across a broader landscape, as the bass, trumpet and other electronics menacingly surround France's thunderous drums like the feeling in the wind right before a bad storm.

"I tend to mold my mixing style to the project at hand and on this one I just was led to that kind of dramatic, spacy sound by immersing myself in the mix and creating as much of a performance there as I could," Ramazanoglu explains. "I intensively used convolution processing to get different instruments modulating each other and a lot of interactive compression and effect processing to shape the individual voices into larger, dense blocks of sound in which the boundaries between the instruments are blurred perhaps."

All these different techniques and textures come together in "Leap Second": In its ambient beginning, Moelvar muses on the blues, his trumpet the fulcrum between the electronics and bass but trapped in the amber of suspended time, until France breaks his shackles and leaps into hard swinging jazz with a tribal and powerful sound. "Leap Second" somehow manages to stay together and to fall apart, and serves as a milepost on the modern music continuum to which poet W.B. Yates seemed to point in his historic "The Second Coming": "Turning and turning in the widening gyre / The falcon cannot hear the falconer; Things fall apart; the centre cannot hold; Mere anarchy is loosed upon the world..."

"The use of openness and space is a very important part of what we do," France concludes. "And creating something from this place allows the musician to feel free and uninhibited and move it in a direction they want to express."