BY CHRIS MOSEY
November 6, 2012
Sign in to view read count 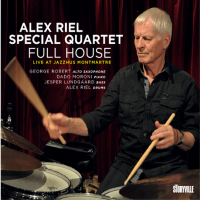 In 2010, he returned to the legendary Scandinavian venue which had recently reopened as a jazz club after being many other things over the years, including a hairdressing salon. Now he was the star of the show, doyen of Danish drummers and there to celebrate his 70th birthday.

It's basically a good, old-fashioned blowing session but one that hasn't always translated that well to disk. The principal problem is Robert's tendency to dominate the proceedings with his uninhibited, sometimes incoherent wailings, particularly on the opener, an overly rambunctious version of "Just Friends."

However, Moroni is a joy throughout, bringing cohesion to the ensemble and soloing with great distinction. His two-fisted solo on John Coltrane's "Impressions," in which he interacts superbly with Riel, saves the number after Robert's parade of Trane-type licks-better suited to the jazz department of the University of Applied Sciences in Lausanne, where he otherwise teaches.

During "Body And Soul," Robert inserts a chorus of "Happy Birthday To You" to ecstatic cries from the audience, fine on the night but a trifle wearing after repeated plays. And Riel's own composition, "Chiming In," a gimmicky, extremely short piece relying, as the title implies, on the use of chimes, serves no real purpose.

Robert is largely absent from Jimmy Van Heusen's "Like Someone In Love," which comes as a relief, and when he returns it is mercifully in less frenetic mode on Willard Robison's lovely, lilting ballad, "Old Folks," on which Lundgaard plays superbly.

The proceedings come to a tumultuous close with a bluesy-sometimes almost rhythm and bluesy-treatment of Clifford Brown's "Sandu," with Robert subdued, Moroni magnifico, and Lundgaard lovingly bowing a subtle solo.

Just Friends; Body And Soul; Impressions; Chiming In; Like Someone In Love; Old Folks; Sandu.