Out to Lunch: No One Left Behind 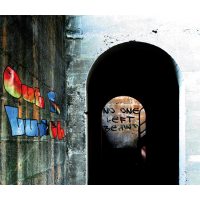 Out to Lunch's No One Left Behind is comparable to collage- an art technique which integrates incongruent fragments, textures and visual forms into a cohesive work. Led by multi-instrumentalist David Levy, the New York-based ensemble at a cursory glance, might be a considered just another experimental jazz funk band. Yet there's clearly more to be gleaned on proven on their third release.

Levy's work with musicians and projects such as Verve Remixed 3 (Universal Records, 2005) is indicative of his appreciation and savvy in merging variety of idioms-jazz classics, popular music, and electronica- into fresh themes. This becomes apparent throughout the course of the album's ten tracks which are spliced, deconstructed, and reanimated with different sounds and music. The electro-dubbed "In Da House" fuses synthesized horns and sonic beats segue into the hip hop persuasions of "Bagga Onions" colored deftly with layers of sampling and synchronized turntablism. The slower paced "Miles Away" contains an itinerary to some far-reaching galaxy that's further realized in" Ostrava" with its heavy dose of sound processing in tandem with acoustic instruments.

Drawing from global influences, the set is not just about techno wizardry. "Joyous Requiem" is inspired by Levy's time in spent in a small village in Akropong, Ghana, filled the mellifluous sounds of African voices and rhythms. There's syncopated vocals in the Avant-pop track called "31 Days," some old-school meets new-school urban funk in "There's a New Seby In Town" and roots reggae vibrations in the title highlighting stirring lyrics and vocals from Damon Cicero Scott, a talented New York street musician. Each of these autonomous pieces stands on its own, yet when sewn together, they form a more intricate and curious tapestry.

In Da House; Bagga Onions; It's a Jungle Out There; 31 Days; Joyful Requiem (In Memory of Howard Malach) There's a New Seby In Town; Miles Away; Ostrava; For Catherine Potter; No One Left Behind.

Title: No One Left Behind | Year Released: 2012 | Record Label: MESA/Bluemoon

About Out to Lunch QUintet

Out to Lunch CD/LP/Track Review Mark F. Turner Two for the Show Media MESA/Bluemoon United States No One Left Behind