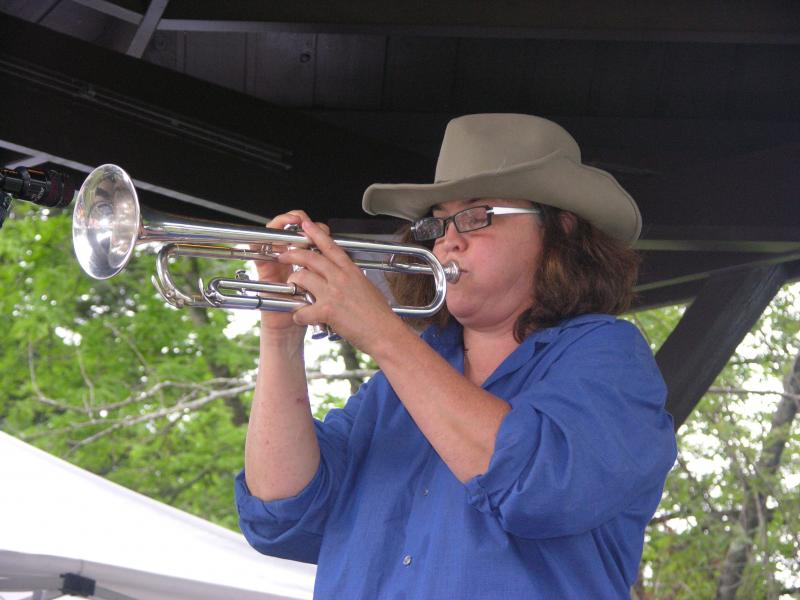 This year's Freihofer's Saratoga Jazz Festival, the 34th edition of the upstate New York event, featured a great touch when famed jazz impresario George Wein was awarded a star on the Saratoga Performing Arts Center Walk of Fame. Wein created the festival, fashioning it as an outdoor event in the mold of the iconic Newport Jazz Festival, and produced it until 2007, when he thought he was pulling out of the business.

He returned to run the Newport Jazz Festival in 2009, and still has a big place in his heart for Saratoga Springs. And vice versa.

But the cool thing extended further, as Wein also performed at the festival, as a pianist fronting his Newport All Stars that were a hit on the main stage of the two-stage Saratoga Performing Arts Center venue. It featured superb players like trumpeter Randy Brecker, Anat Cohen on sax and clarinet, Lewis Nash on drums, Peter Washington on bass, Lew Tabackin on sax and flute and guitarist Howard Alden. They wailed through a set of standards, with Cohen flexing her muscular chops on both instruments. She blazed on tenor through "Manha de Carnival," which also featured the always-excellent flute of Tabakin. Brecker's trumpet soared as it always does and the rhythm section was impeccable. Wein's 85 year-old fingers are nimble enough to provide many fun moments.

Elias' set was typically fine, full of energy and life. Her current band, touring in support of her new album Light My Fire (Concord, 2011) and she did an array of tunes from it, as well as gems from past albums like "So Danco Samba." The rhythm section, anchored by Marc Johnson on bass, is energized by percussionist Marlvaldo dos Santos. High-energy tunes were balanced by softer things like "Rosa Morena," allowing Elias to display her attractive voice. She's become a strong singer, but don't go to sleep on her monster piano chops that propel the music.

"It's a very special album and it has an aspect to it that is different than the others," she said after her set. "It has some very sexy moments. It has moments that are very cool, vibey. But also a lot of rhythm, groove and romance. It has different things that worked so nice together ... I always brought different elements of Brazilian music, but I've done a lot of albums that were more instrumental. This is a vocal album that still has a lot of piano. But this album, with the vocals, has more of a variety of elements of Brazilian music than just the bossa nova. There's some music from the north of Brazil, from Bahia. And some Afro-Brazilian rhythms ... This album, from the very beginning, had a force of its own." 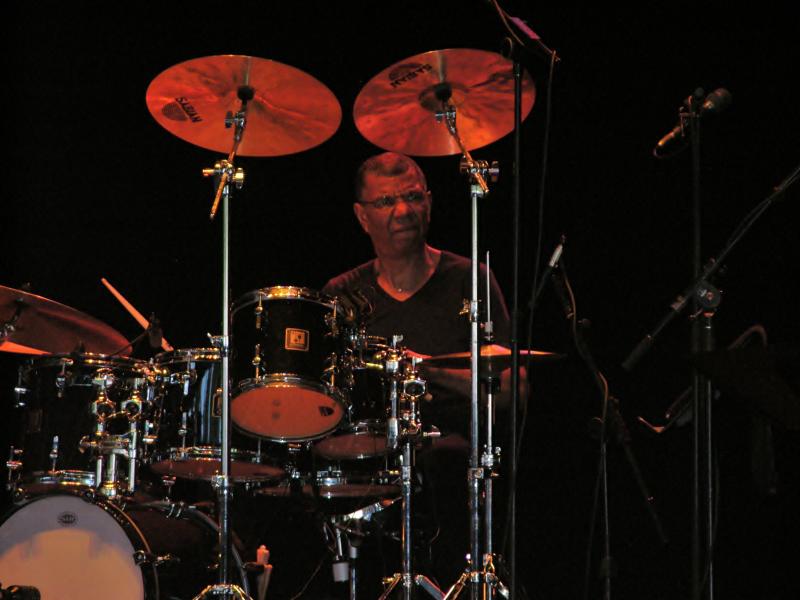 Among the best was the music of DeJohnette. His band featured young monster musicians who have melded together and play with passion, scorching the SPAC main stage with blistering improvisation. Of course, it was all fielded by the magnificent drumming of the leader, who got sound and feeling from a drum set that was staggering. George Colligan's keyboards were crazy good, and David Fiuczynski's hot guitar work created blissful moments. And DeJohnette has found a soul mate in Rudresh Mahanthappa, who blew hot, cool and everything in between. Always pushing and exploring.

Marcus Strickland's recent albums are establishing him as a major saxophonist. With David Bryant on piano, Ben Williams on bass and twin brother E.J. Strickland on drums, the group mesmerized the gazebo stage audience. The band cooked, and then was tempered by a serene ballad that highlighted the soprano sax. Bassist Ben Allison's band had a similar effect, with sublime musicianship streaming from the bandstand, evoking a variety of moods while always maintaining intensity and interest. Guitarist Steve Cardenas had a rich sound and his melodic sense of invention was always pleasurable. Drummer Rudy Royston has really along in the last couple years as one of the very finest young drummers on the scene, and he drove the Allison unit in great fashion. Cardenas also played his own set as a trio with Allison and Royston, so he got to develop more musical ideas of his own and the interplay of that unit was what jazz is about.

The Bad Plus was working Never Stop (E1 Entertainment, 2010), its first all-original recording. They've been together a while now and the synergy among drummer David King, bassist Reid Anderson and pianist Ethan Iverson was strong. They stretched the rubber band of the trio and it snapped back when they needed to. It was thoughtful music but still had a lot of guts.

On the other hand, Donald Harrison always plays with guts and feeling, but his set called A Night in Treme, after the HBO series, wasn't as exciting as when he carries his own band and plays what he calls "nouveau bop." This band, capturing some of the tradition of New Orleans, featured New Orleans Indians, from which Harrison is descended, and the singing of Cyril Neville. Entertaining in spots, it didn't always play out with anything that could be called special. More fun and funky was Brian Mitchell, whose résumé includes playing piano with Levon Helm of The Band. The pianist had a sleek band with percussion, keyboards bass and trombone. They were full of blues and funk and swing. 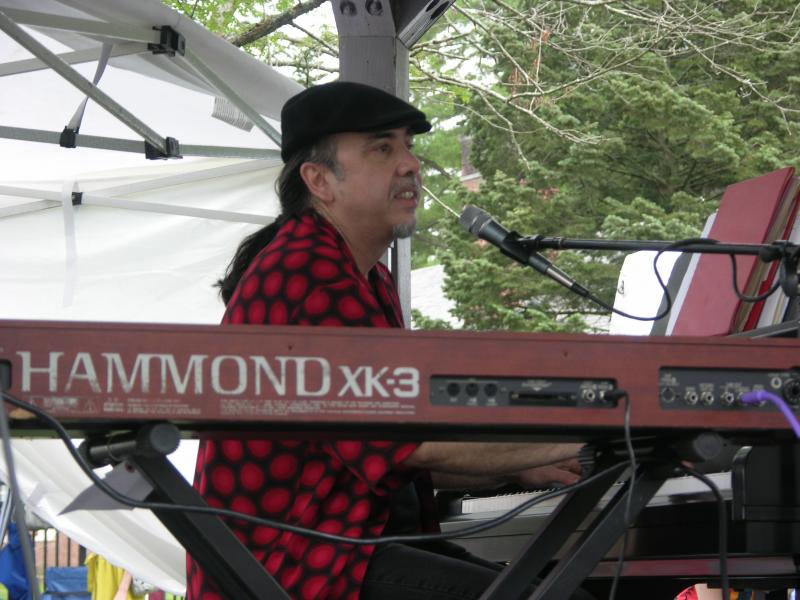 Mitchell called to mind Dr. John, but without as much rasp in the voice. "Shake That Thing," and "Love Don't Mean That Much To Me" had toes tapping and heads bouncing.

Pedrito Martinez also knew how to get the feet moving, as most Latin bands seem to do. It was a small band though. Alvaro Benavides played percussion with the leader and they were joined by keyboard and bass. Everyone sang. But they cranked out high energy Latin music with not much jazz. Hips were shaking as well as heads.

Saxophonist Tia Fuller has been rising on the scene and with good reason. She's a smoking player with all the grasp of bebop and the heart to light it up. She always brings the fire. Her sister, Shamie Royston, is also a fine musician, playing remarkable piano, and Rudy Royston played superlative drums. The result was a tight, grooving, burning band.

Bringing a different kind of fire, more smoldering, was trumpeter Rebecca Coupe Franks, who played a set of interesting original material, like "Hugs From Heaven" (for her late father), that was marvelously carried out by Luis Perdomo on piano, Tani Tabbal on drums and Lew Scott on bass. Perdomo's fleet fingers are always a treat; tasty and dazzling at the same time. Franks showed a nice tone and good chops on her straight-ahead jazz compositions. She also sang a couple numbers, which wasn't a good choice. 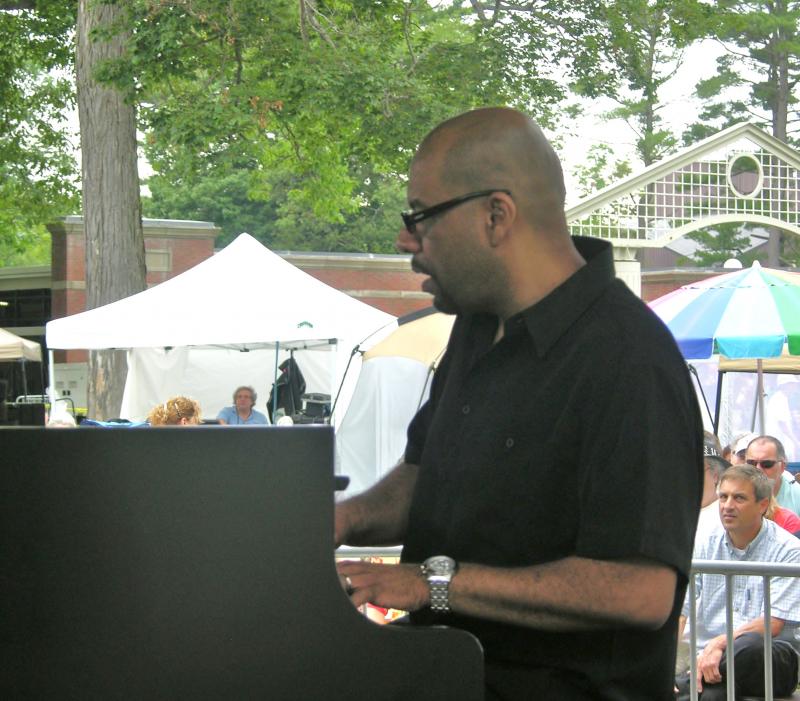 Singing is the choice of Hilary Kole, and the New York City club star was in fine form, despite struggling with a cold. She has a style that straddles jazz and cabaret, but she's been doing an awful lot of jazz gigs and it shows. Her phrasing, and even her scatting, was as much jazz as just about anything else. She articulated and swung, and knew how to get feeling out of a song without being maudlin and without forcing it. It was a swinging set, as her voice ran like syrup over songs like "Better Than Anything," "Get Outta Town" and other standards. John Hart's sparkling guitar solos added a lot to the good feeling. 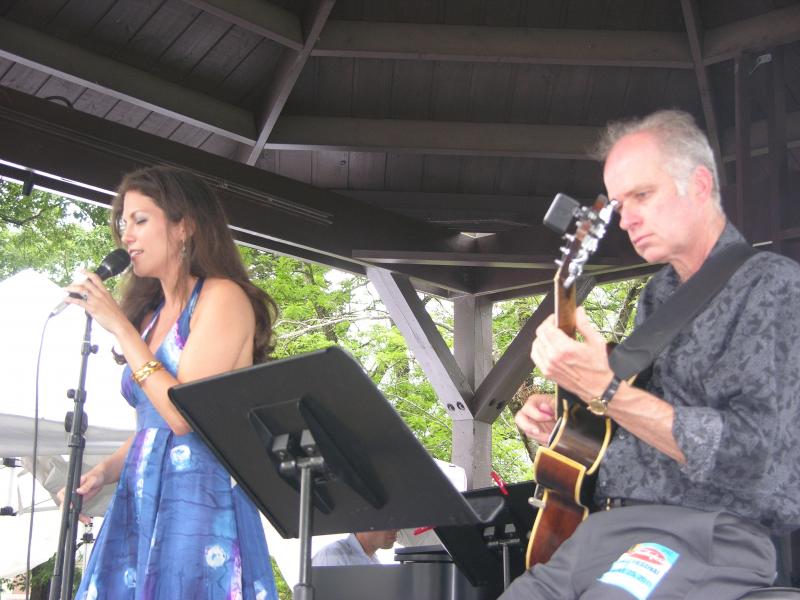 A couple great jazz singers took the main stage during he weekend. Dee Dee Bridgewater did a set of music honoring Billie Holiday. Her voice is always on target, it seems, with a strength that kind of sneaks up on the listener. She has a strong stage presence and grabs the audience before opening them up to her stories.

Dianne Reeves is another strong-voiced jazz singer, along the lines of Sarah Vaughan, and was part of the Sing the Truth! act, along with Angelique Kidjo and Lizz Wright. Billed as a tribute to Odetta, Miriam Makeba and Abbey Lincoln, it was also a tribute to women in general, taking songs from a huge gamut of female singers like Joni Mitchell, Nina Simone, Tracy Chapman, Holiday and others. All three were in good voice in an uplifting performance. Reeves, particularly, was shining on "Throw It Away" of Lincoln's, whose popularity among jazz singers is because she was such a strong songwriter, and it's always a good thing when tribute is paid to this late, great artist. The band, featuring Geri Allen, bassist James Genus, drummer Terri Lyne Carrington and guitarist Romero Lubambo, was top notch, providing a perfect platform for the vocalists.

The 34th edition of the festival had solid music throughout, some as blistering as the June sun. Freihofer's Saratoga Jazz Festival remains one of the finest events in the northeast region of the U.S. and it could be argued that the festival stands on as good a ground as any. It will be typical that as the calendar turns into 2012, there will already be rumbling about what will be on the docket for festival number 35.