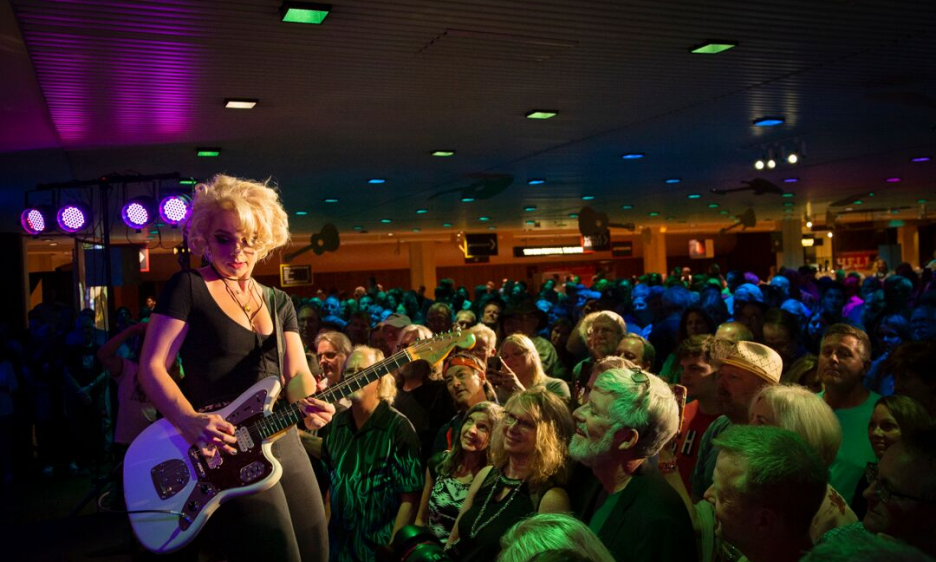 It takes place every other year; every odd year. Going back to 2005, ELLNORA: The Guitar Festival, held in the University of Illinois' Champaign-Urbana' one-stop-shop Krannert Center, has been celebrating the works of an amazing array of plectrists from all walks of life, genres and backgrounds.

A bit of ELLNORA's history in the Krannert Center (the center this year also celebrating 50 years of performing arts presentations as a unit of the College of the Fine and Applied Arts at U. of I.): As before, free and ticketed events take place across five indoor stages, all of the music programmed with distinction by Artistic Director and New York City's own David Spelman. In tandem, Krannert Center Director Mike Ross and Associate Director for Artistic Services Tammey Kikta worked with Spelman to book, program and host the event.

A very short list of previous acts: Bill Frisell, Taj Mahal, Janis Ian, Vincente Amigo, Rez Abbasi, John McLaughlin, Richard Thompson, Alberta Khoury, Marc Ribot, Los Lobos, John Scofield, Julian Lage, Jeff Tweedy and Sierra Hull. And that's just picking from the likes of artists readers at AAJ might recognize. There are scores of not just more jazz and blues artists but others from more classical, folk and world traditions who are always part of every ELLNORA mix. But at least this sampling can give you a sense of the gravity of what kind of talent this festival in the godforsaken, flat hinterlands of central Illinois has gathered, many of those bigger names having played here more than once.

As with every ELLNORA, there were panel discussions, workshops, even an early Saturday morning yoga class with live music. But, of course, what gets this mixed crowd of multiple generations and backgrounds (and not just students) back here every odd year are the stage shows. And, as with every ELLNORA, Thursday serves as the Opening Night Party, this year with five of the six events free. In many ways, perhaps because of this, Thursday can be the most well-attended of the three nights/two days fest. And, what a perfect night, weatherwise, for people to have enjoyed music, inside, and out under the stars!

Things kicked off at 6 with the first of two shows by Toko Telo, the Madagascar-based trio of guitarists D'Gary and Joel Rabesolo and singer Monika Njava, the only outdoor event. By the second set, the nightsky was darkening under a half-moon as the group performed in the romanesque Amphitheater, the perfect setting for what turned out to be music both eloquent and stirring. At turns exuding a kind of peaceful calm, the music could suddenly become more vibrant as Njava's heartfelt vocals were sensitively augmented by her flanking guitarists, their conversational styles a clear contrast, a delightful blend. More sounds from Africa came from Niger-born artist Bombino, playing a driving set indoors of Saharan-inspired desert blues called tichumaren, which naturally led to an eclectic mix of Mississippi delta blues and much more as Reverend Robert followed.

There was another contrast this early evening: The insistent bombast of electricity and volume indoors versus the relative quiet one encountered under the stars listening to Tolko Telo. Add the family factor with strollers and the like to sitting outdoors along with the smells of delicious foods at different booths, and it was close to a no-brainer to sit back and imagine being on the shores of some distant land as the music drifted as if part of the larger surrounding ecosphere.

That all was about to change as fest-returning phenom Samantha Fish kicked off what felt like a very generous supply of hearty, insistent funky blues, complete with a smart, ready-set-go horn section (including flute!).

Yes, indeed, Samantha Fish, once again dressed in alluring tights, this time black from top to almost bottom, completed by her spiky pink stilettos. Maybe her dishwater blonde hair continues to serve as a decoy from what lies underneath: a rare, almost raw talent for mining and expressing not only blues but the American pop songbook in general. For those unfamiliar with the Kansas City native, now a New Orleans resident, Fish follows in the footsteps of inspiration Bonnie Raitt in that she combines a dual talent as singer and guitarist. In Fish's case, the guitar work may be the thing to watch more than anything, her comfort and ease with improvising akin to any jazz guitarist just waiting to expound.

That said, I recall Fish's previous visit to ELLNORA having been more captivating, more integrated. Perhaps it had something to do with a first encounter, but, even with the addition of another blues heavyweight, Luther Dickinson joining her later in the set, a lot of the music sounded more pedestrian, almost generic, leaning too much on a rock esthetic, despite the band's obvious enthusiasm. Still, it was fun to witness her seemingly perpetual rotation of guitars, from a Fender Strat to a Gibson SG, knowing she was going to land on that spot that showed time and time again how tight her band was, keen to her every move. Standout, defining moment: Fish's and Dickinson's slow, grinding takedown of the Fred McDowell / Rev. Gary Davis classic "You Gotta Move."

The evening was capped off with five amazing, interactive guitarists, all acoustic except for the presence of Dickinson, who later grabbed an acoustic. The format was billed as a "Spontaneous Combustion," an idea perhaps spawned in programmer Spelman's head in the intervening years. Nonetheless, the soldout show in the club-style Studio Theatre treated patrons to extended improvised jams, music started before everyone's eyes and ears, including the musicians.'

A 20-minute two-chord venture kicked things off, soloists somehow reading each other to proceed from right to left (if you were on stage). As was a pattern, given the music's duration, there were tempo changes, eventually two of the guitarists, Rob Ickes and Trey Hensley, pairing off. It all fell into place naturally as a kind of traditional folk approach melded with a jazz sensibility. A guitar lovers delight, the others who performed with distinction included Molly Tuttle and Steve Dawson, a performing pair who appeared as a duo the following day.

Two of the anticipated shows for this year's ELLNORA were the return visits of both Kaki King and Pat Metheny. In King's case, it was a special event, given that it was billed as her "North American Premier" performance in the seated Colwell Playhouse of something she's been working on for some time, a piece entitled Data Not Found. The impact was substantial, in that this one-woman show was a multi-media event that showcases not only King's prowess on the guitar but her conceptual, imaginative ways of integrating ideas with musical content. Dressed in all white, she started off with a spirited, impressive run on snare drum, eventually leading to playing her various guitars (including a matching all-white acoustic) in different settings, moving about the stage, a tent centrally placed, with sand and visuals changing the various settings. Not to give anything away, it was unlike anything this reviewer has seen or heard, including from her. There did seem to be an environmental vibe to it all, King's passion to not separate the personal from the political paramount but all of it serving her enduring drive as an artist.

As for the Metheny set, held in the Tryon Festival Theatre, it was his latest edition, this time with drummer Marcus Gilmore and keyboardist James Francies, billed as Side-Eye. Centrally positioned with each of the others facing in towards the guitarist, the impression left was of an integrated trio, a hallmark of Metheny's bands over what are now the decades, starting back in the mid-1970s. It was to be a return and rerouting of the past, as Metheny led his band back to revisit an old favorite to start things off, Ornette Coleman's "Turnaround," this time-tested blues played at its typical medium-tempo gait. That '70s vibe continued with a another trio turn with "Bright Size Life," only this time the Jaco Pastorius bass playing part coming via the keys.

Another past musical event, courtesy of Metheny's Still Life Talking, emerged, eventually enveloping something from the era that brought Bright Size Life, his 1977 anthem Watercolors. Expressive, exuberant, whether playing with others or by himself, this performance reminded that one can get lost in the maze of all those amazing Metheny compositions, the decades seemingly slipping away as he continues to write great music even as he celebrates the great compositions of those who have inspired him.

Metheny's chord-filled playing with singing lines continued, Francies' keys performing multiple duties, as organist, Fender Rhodes-style, and acoustic pianist, all via a plugged arsenal. As for Metheny, the flow from electric to acoustic seemed as natural as breathing, the shifts almost imperceptible. He was able to help foster a sense of being in a club even though it was a seated event with rows and distance. At times, the illusion was created of a former Metheny trio with bassist Charlie Haden and drummer Billy Higgins, even though Francies was clearly playing as a multiplex sideman and Gilmore's strengths lay world's apart from what made Higgins such a talent.

Yes, it was all staged, and tight as can be, but hearing a new version of Metheny's "Question And Answer" only served to remind that his music never sounds dated. He always seems to get people who know his music inside and out.

And then, there are the solo spots, where he is the only on the stage, which included a hang with his noted Orchestrion guitar. Of course, at a guitar festival, not to haul it out would constitute a sin, so to speak. And Metheny, once again, showed that he is not a show-off, a bell's and whistle vibe nowhere to be heard or seen; just somebody who loves to strum and pluck and who also is keen on invention.

As for the proverbial encore, it was solo, it was acoustic, with references to Still Life Talking, "September Fifteenth," "Last Train Home" and others, Metheny's bushy, hairy head bowed down into his instrument, as if trying to become that which he is playing, at times his playing very non-rhythmic, fragmented, as if he was reaching back into a past he can never reclaim but can never let go of.