Samantha Fish: Kill Or Be Kind

By Doug Collette
September 28, 2019
Sign in to view read count 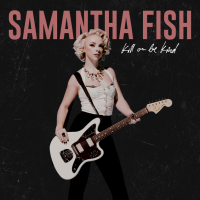 Wielding her guitar as she adopts a saucy blonde bombshell pose, the image Samantha Fish projects on the cover of her Rounder Records debut would mean next to nothing if the music inside didn't deliver a similarly striking impact. Recorded at largely at Royal Studios in Memphis and another two sites in New Orleans, the woman's excursion into the roots of r&b, soul and blues supplements a fully-formed style as a guitarist and vocalist that even blues icon Buddy Guy has recognized.

This sixth album of the Kansas City Missouri native's reaffirms her collaborative skills even as she asserts her own talents. All but two tunes were co-authoring efforts with the varied likes of Jim McCormick (who has worked with Fish before and also written for Luke Bryan and Keith Urban) and Kate Pearlman (one-time songwriting partner of Kelly Clarkson). Products of the former like the title tune align with those fruits of labor with the latter such as "Fair-Weather," together painting the portrait of an artist coming into her own. Consequently, Kill Or Be Kind illustrates the upside of an alignment with a major label: it nurtures creativity instead of compelling compromise.

That said, with its processed vocals and mechanical rhythms, "Bulletproof (Tangle Eye Mix)" sounds as arch as Fish looks on the album cover, at least until she solos (twice) in twisting, turning and ultimately cutting fashion. Her playing is cathartic even if her singing is not, but the baby doll tone she adopts on "Kill Or Be Kind" effectively camouflages the ominous tone in the lyrics as does the relaxed unfurling of horns in the form of Jim Spake's saxophones and Tom Clary's trumpet; the musicians are definitely drawing on the history of the two Southern recording locales and this is one of the most overt instances.

Kill Or Be Kind becomes progressively more reflective of the heart of Samantha Fish as it proceeds through its eleven tracks of approximately forty minutes. "Love Letters," for instance, features scathing electric guitar along with punchy horns even more prominent than on prior cuts. Meanwhile, that arrangement presents sharp contrasts through the use of Rick Steff's Fender Rhodes electric piano and Hammond B3 organ. And on the very next track, "Watch It Die," the front-woman wails a full-blooded vocal where no affectation whatsoever appears to undermine the emotional undercurrent of the song.

"Try Not to Fall in Love With You" sounds even more authentically soulful, reaffirming how the artist here maintains the legitimate approach to roots she established early in her career. In his role as producer, Grammy Award winner Scott Billington did justice to the talent at hand, especially in maintaining a stable corps of musicians. Meanwhile, through his recording and mixing skills, the comparably celebrated Scott Reynolds insured an all around sonic balance proportionate to all the participants.

Ultimately, though, the ensemble and the engineers are following the confident, authoritative lead of Samantha Fish: her pithy solo during "Love Your Lies" leads directly to the finality of the concluding performance, "You Got It Bad," thereby rendering the whole of Kill Or Be Kind a personal and creative statement of purpose.

Bulletproof; Kill or Be Kind; Love Letters; Watch it Die; Try Not to Fall in Love with You; Fair-Weather; Love Your Lies; Dream Girl; She Don’t Live Around Here; Dirty; You Got It Bad.