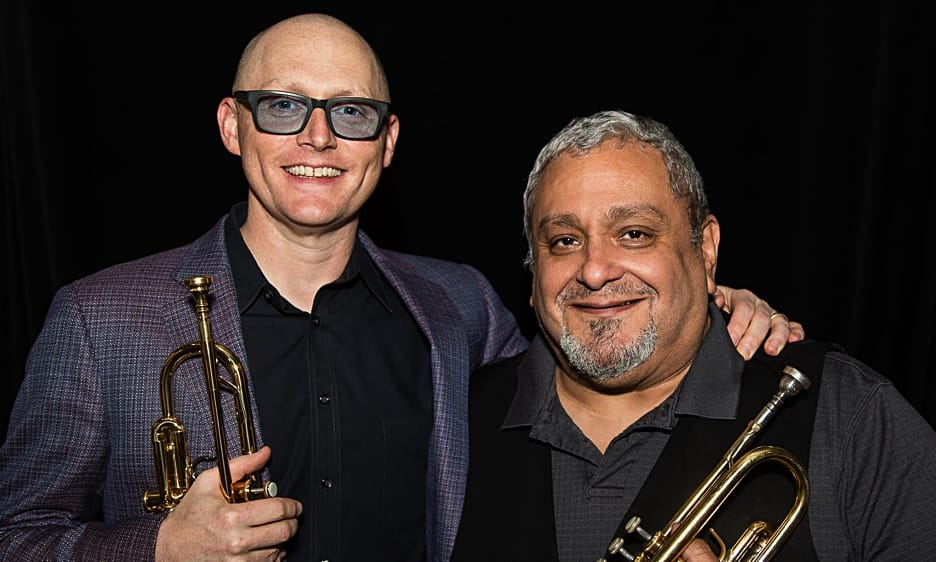 In the sky, there is no distinction of east and west; people create distinctions out of their own minds, and then believe them to be true.
—Gautama Buddha

Two trumpet quintets in jazz are rare, historically and presently. The alliances most commonly mentioned are the bop era tandem of Fats Navarro and Howard McGhee and their post-bop descendents, Freddie Hubbard and Woody Shaw. The individual players in both these pairings had similar qualities in terms of style and approach.

The pairing of Bronx born trumpeter Ray Vega, and his younger partner, Seattle's Thomas Marriott, as well have their musical commonalities. It is where the differences lie between the two that provides the intrigue around their recordings and live performances.The age-old belief that the east coast version of jazz is commonly more intense, and the west coast approach more laid back, has not been completely eradicated by modern travel, and in recent times, social media. Vega's move from the Bronx and New York City to Burlington, Vermont has certainly redefined the "east" portion of the equation, while Marriott is now suddenly the more urban of the two, residing in the city of Seattle. Musical styles aside, the true story of this historic pairing has much more to do with friendship, with mentorship, and a long time friendship and bond that has seen Vega name his youngest son after Marriott. A little background therefore, is necessary to be able to appreciate the magnitude of this latest meeting in Seattle, performing at the Bellevue Blues and Jazz Festival.

Like many young jazz musicians coming of age in modern times, Marriott departed Seattle for New York after winning the Carmine Caruso Jazz Trumpet Competition in 1999. He had met Vega in Seattle while still a student at the University of Washington, with Vega on tour with Latin Jazz great Tito Puente. Vega would provide mentorship to the young Marriott, helping him get acquainted with the scene in Gotham. They would find a commonality in their dedication to bebop grounded jazz, while Vega expanded Marriott's musical horizons with his deep connection to Latin music. Vega, a true heavyweight in Latin jazz, had paid serious dues in the bands of Puente, Ray Baretto, Mongo Santamaria, Johnny Pacheco and Joe Henderson to mention but a few. He was and is, a bonafide innovator in both Jazz and Latin forms.

Marriott would spend time on the road with Maynard Ferguson as one of the main soloists in his Big Bop Nouveau Band during this period, as well as appear with Puente and Chico O'Farrill. His return to Seattle would see him become a major force on the historically vibrant Seattle scene, resulting in producing thirteen albums for the highly regarded Origin Records label.

The brotherhood between Vega and Marriott remained despite Marriott's eventual return to Seattle. In December of 2009, Vega made his way to the Pacific Northwest to record the tandem's first album, East-West Trumpet Summit (Origin,2010). backed by an east-west rhythm section of New York pianist Travis Shook, and Seattle based Jeff Johnson (bass) and Matt Jorgensen (drums). Nearly five years later he returned to perform live with Marriott and to return to the studio to record Return of the East-West Trumpet Summit (Origin, 2014). This time, they played within a B-3 organ format, with George Colligan on the keys, and Jorgensen returning behind the kit. The two had learned how to make the dynamics of the two trumpet format work almost seamlessly. The music was straight ahead and swinging, allowing for both players to play loose and free. They recorded a variety of originals contributed by both participants, and classics like Horace Silver's "Juicy Lucy," Art Blakey's "Indestructible" and Lee Morgan's "Totem Pole."

The 2021 gathering bore similar traits to the previous encounters. There would be a few live performances, followed by a studio session. Marriott turned to friendship once again, inviting pianist Orrin Evans to join for this incarnation of the trumpet tandem, with the great Roy McCurdy joining on drums. Seattle first call bassist Michael Glynn was on board as well, tilting the musical axis slightly towards the west. The 400 seat Meydenbauer Center Theatre in Bellevue, WA, provided an intimate and acoustically sound environment, with an apparently knowledgeable jazz audience in tow. The band delivered a riveting ninety minute set of originals and a few carefully selected pearls.

One such pearl was a dive into the George Cables tune, "I Told You So." After swinging into the set with a stellar version of Don Cherry's classic, "Art Deco," Vega migrated over to flugelhorn for the Cables classic, adding a degree of depth to the front line. Evans' solo was marked with his trademark ability to transition from focused chordal clusters and lovely voicings to cascading melodic runs.

Marriott's "ODAT (One Day at a Time)" once again put a focus on Evans, and his resourceful, original approach to postmodern piano. His appearance as a sideman is not in itself unusual, despite his standing in the jazz community as a bandleader. Notably, he has been a regular with trumpeter Sean Jones' quartet for more than a decade. He has appeared with Marriott on two of his finest recordings—on Urban Folklore (Origin, 2014) he is paired with bassist Eric Revis and drummer Donald Edwards, and Revis once again with drummer Mark Whitfield for Marriott's latest, Trumpet Ship (Origin, 2020). Veteran drummer McCurdy played with sheer physicality, mixing intricate snare playing with dynamic tonal changes and sizzling cymbal work. His remarkable playing dates back to a decade in Cannonball Adderly's band, and significant time with Sonny Rollins in the 1960's. Having McCurdy in the band along with Evans certainly speaks to the respect that Marriott has earned as a trumpet player, composer and most importantly, as a bandleader. The seemingly effortless play of Glynn between the lines of this luminous pair "sealed the deal" for this rather impressive gathering of talent. Vega was featured on Neal Hefti's tongue-in-cheek ballad, "Girl Talk," a tune perhaps best known by Tony Bennett's interpretation. Ballads are always the truest way to broach the subject of beauty and melancholy, and Vega did just that, though playing in a much more somber tone than Bennett's happy go lucky phrasing. Vega played the tune on flugelhorn, an instrument he mentioned he is gravitating towards more and more. The refined tone he employed combined with Evan's sparse and lyrical comping created a brief but definitive romantic, emotional repose.

Two more previously unrecorded Marriott compositions were featured, the melancholic "Front Row Family," and the high energy "One Quarter Nelson." On the former, the two trumpets harmonized the melody beautifully, with Marriott falling into an impeccably clear solo with dynamic range. The Seattle stalwart has always been lauded for his lush tone, yet the strength and precision of that ardent tonality has continued to evolve, as was plainly evident on this evening. Vega's post-bop playing is adorned with Latin accents, his approach to melodic improvisation increasingly thoughtful. His phrasing can at any moment erupt into lightning quick flashes with thunderous bursts. He frankly has never sounded better. On the latter, McCurdy was featured, introducing the tune with his spirited, ultimately musical playing. His presence brought an awareness to the proceedings, a dynamic presence steeped in history. His work with bassist Glynn was an underlying current that kept the pulse of the band reading and reacting all evening.

The bandstand broke down to a trio for an understated version of the standard, "I Want to be Happy." Evans played in and around the melody with deft touch, framed by brief references to the harmony with sparse voicings. McCurdy employed a skip along rhythm with a delicate application of fine brushwork.

The performance culminated with a version of Charles Mingus' swinging opus, "So Long Eric," with Glynn playing the intro in, as the band slid into the main course of the tune. The eloquent and soulful soloing brought to light the possibility of this being the most musically satisfying gathering of the East-West Trumpet Summit. With the format being tunes that generally swing hard without much harmonic restriction, the individual traits of each player became very clear, as well as all the wonderful ways they found to play collectively. Marriott assembled the perfect rhythm section for the concert and the session that is to follow. Most remarkable is the amazing growth of both players over the twelve year history of this project. Marriott's playing is stronger, more lyrical and refined. The vocabulary from which he draws as a soloist is an infinitely deeper pool of ideas than he possessed at the time of the first encounter. Vega has lived a lot of life since that first session with his brother in music, including a major move to teach at the University of Vermont in Burlington. His wisdom includes the ability to learn and evolve from teaching itself, to come to a greater realization of one's personal musical prowess per the refining process that results from the dedication to, and vulnerability of the teaching profession.

What is precisely the same about the East-West Trumpet Summit has nothing to do with the personnel, the tunes chosen, or the personal growth of each member musically. It is the brotherhood, the sense of family, the love that is plainly and properly on display when these two great friends share a stage. To extend that brotherhood to Evans and Glynn adds strength, dedication to craft and deep friendship. The veteran McCurdy was as a conductor of a fine symphony, pushing and pulling, then joyfully going along for the ride with an audience of three hundred souls in tow at Meydenbauer.