Duke Ellington Tames The Savage Beasts: Lions and Tigers and Bears (and Gazelles!)

By DAN BILAWSKY
July 14, 2010
Sign in to view read count
I begin this edition of Old, New, Borrowed and Blue with a confession. I have an unabashed love for the music of Duke Ellington. From his brilliantly scored compositions, to the singular instrumental personalities in his band(s)—with Ellington, Jimmy Hamilton and Johnny Hodges ranking at the top of my list—Ellington seems to transcend the "big band" tag and his music really deserves the designation of "fine art." Writers have been treating this music as such for over seventy five years, with R.D. Darrell's 1932 "Black Beauty" piece considered to be the first serious critical look at Ellington's work, and no stone has been left unturned since that time.

Pieces have been written about specific albums, individual sidemen, the legendary Fargo concert and recording, Ellington's small group work of the late '30s, "The Blanton-Webster Band," his working relationship with Billy Strayhorn, The Cotton Club, his Newport performances, his sacred music, his suites and a variety of other topics. His music has been analyzed, with students and scholars breaking down the harmonic progressions of these songs, transcribing solos and exploring song forms, and some of Ellington's note-for-note arrangements have even made their way into school jazz band programs through Jazz At Lincoln Center's Essentially Ellington program. With all of this examination of Ellingtonia it seems highly unlikely that anybody has overlooked anything.

Ellington as composer is well documented and his ability to write, not only for specific instruments but also for the specific individuals in his band has been discussed ad infinitum. So, you might wonder, what hasn't been covered? Duke Ellington as zookeeper is a good place to start. This months column looks at Ellington's unintentional "Wizard of Oz Suite"—referencing Lions and Tigers And Bears (Oh My!)—with a bonus track thrown in for good measure.

While it can be tough to gain universal consensus from a group of critics or writers, few would argue with the assertion that "The Blanton-Webster Band" was one of the great big bands of all time, and perhaps Ellington's most indelible outfit. This band, taking its name from two key instrumentalists in the group—tenor saxophonist Ben Webster and bassist Jimmy Blanton—was a brief two year snapshot in the musical photo album of Duke Ellington's life, but it created some of the most enduring recordings in the big band canon. One such song, and the first major bass feature for Blanton, is "Jack The Bear."

When Ellington first heard Jimmy Blanton play, in St. Louis in the fall of 1939, he heard something special in the bassist and appreciated his ability to take the bass beyond a simple timekeeping role and into true soloist territory. The real "Jack The Bear," according to Mark Tucker's liner notes for Duke Ellington: The Blanton-Webster Band (Bluebird, 1986), "was a Harlem bass-player who, as reed-player Gavin Bushell recently recalled, had a tailor shop at the corner of St. Nicholas and Edgecombe Avenues." While that particular man has become a simple footnote in the story of this song, jazz history recognizes Blanton as the larger than life being in this piece. As the song begins, Blanton plays in between the band statements and his facility and the clarity in his playing is a wondrous thing, basically unknown in jazz until this time. After this brief episode, Ellington enters and Blanton immediately falls in line, walking with the rhythm section and backing the other soloists. To say Blanton is the only game in town on this song would be unfair, and Barney Bigard's soaring clarinet flights, Cootie Williams' exuberant trumpet cries, Harry Carney's swinging saxophone and Joe Tricky Sam Nanton's muted trombone statements are all part of the package. The ensemble work is another key element at play here, and the band continually builds things up until Blanton takes the spotlight back for the last thirty seconds-or-so. His oddly angular line at the end of his solo was so far ahead of its time that it still sounds thoroughly modern today.

While several Ellington albums have returned to the marketplace through this series, Ellington is just one of many pianists on The Jazz Piano (Mosaic, 2007). When Mosaic released this CD, old became new once more and fans of jazz piano were able to take a front row seat at this long-forgotten concert. This album was recorded live at the Pittsburgh Jazz Festival on June 20 1965, and the CD serves as a survey of jazz piano styles—from early jazz through the date of the performance. The music is performed by some of the best piano practitioners around, including Mary Lou Williams, Earl Hines—both Pittsburgh natives—and Willie "The Lion" Smith. While Ellington only performs two solo pieces here—and a duet with Hines on "House Of Lords"—he uses one of these opportunities to pay tribute to one of the piano players present on that day.

At different times in his career, Ellington composed colorful musical "portraits" to represent and honor many key figures in the music and people he admired. While Louis Armstrong, Sidney Bechet, Mahalia Jackson, Wellman Braud, Bert Williams and Bill 'Bojangles' Robinson all received the portrait treatment, "The Lion"—to the best of my knowledge—is the only person to ever be the subject of two Ellington portraits. Smith's larger than life image—with a cigar hanging from his mouth and a well-placed Derby hat on his head—matched his larger than life technique. His skills as a stride pianist, along with his high-level counterpoint craft, put him in a league of his own—or "Beyond Category" as The Duke might say.

Ellington performs "The Second Portrait Of The Lion" on this recording and, before he begins, he makes a sly remark about needing to warm up his left hand. He also makes a touching statement that, "if you hear some lion in there, it rubbed off many years ago." Ellington then proceeds to launch into the piece which takes stride piano as a leaping-off point, arrives at a section of music which leans on European Romantic-era influences—featuring some flowery flourishes—returns to the stride theme, and ends with a gorgeous rubato statement of purity. Anybody interested in the music of Willie "The Lion" Smith can certainly appreciate this mixture of styles. This album also contains several brilliant Smith performances, including "Contrary Motion," a standards medley and his brilliant variations on the theme of "Blue Skies."

While Ellington composed vast amounts of musical material during his life, he also performed and recorded music by other composers. He occasionally took on some pop material of the day—most notably during his Reprise period—and he also covered some classic jazz gems. Another Mosaic release—Duke Ellington: The 1936-1940 Variety, Vocalion, And Okeh Small Group Sessions (Mosaic, 2006)—features Ellington in a small group context performing "Tiger Rag," originally popularized by the Original Dixieland Jazz Band. This group—wrongfully credited at times for "creating jazz," but rightfully credited for putting jazz on record (literally)—brought "Tiger Rag" to the masses and everybody from Fats Waller to Frank Sinatra has given the song a try since that time. The Library of Congress even acknowledged the importance of the original recording of the song, recently placing it on the list of the first 50 recordings to be placed in the National Recording Registry.

Two takes of this song were recorded—with Ellington behind the piano—at a session made under the banner of "Cootie Williams And His Rug Cutters." They begin with some runaway piano playing from Ellington and feature Williams' magnificent trumpet runs, wonderful trombone effects from Nanton, sly solo work from Johnny Hodges and some hyper bass work from Hayes Alvis. As Ellington historian Steven Lasker points out in his liner notes for this collection, this arrangement marries the "Tiger Rag" with Ellington's own "Hot And Bothered," and these takes were recorded at a session in March of 1937, right after the band returned from the West Coast and right before they opened at the Cotton Club in mid-March of that year. While these tracks don't have the classic status of many of the maestro's performances, they present a priceless picture of vintage small group Ellington in the studio during this particular era.

Now that all of the "Oz" animals have been covered, I'll throw in a bonus with another example of Ellington-as-Dr. Doolittle. While that character spoke to the animals, Ellington's beast-based songs actually speak for the animals and one of my favorites is "Purple Gazelle." Regular readers of this column will note that the "Blue" reference is missing from this song (since it isn't a blues and the title doesn't reference that color) and you've caught me red-handed. I'm taking liberties within this particular column, and using the admittedly thin argument that blue is one of the two colors that make up purple—but if you add that to my red-hands, the color scheme seems to work out just right anyway. 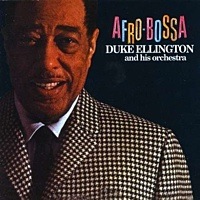 "Purple Gazelle"—known as "Angelica when Ellington recorded the piece with John Coltrane—was recorded in 1963 for the album that would be known as Afro-Bossa (Reprise, 1963). This piece is unique in Ellington's library because of its tropical/calypso vibe and Stanley Dance claimed that Ellington bestowed the unique tag of "the ragtime cha-cha" on this song. From the island sway of the rhythm section, to the close voiced chords with some muted unison hits, it's hard not to be sucked in by this recording. Bassist Ernie Shephard, Ellington and drummer Sam Woodyard start things off and the saxophones sashay over the brass section as the melody of the song is introduced. While the theme can be viewed as being a bit camp—though highly addictive and enjoyable—the rhythm section perfectly captures the graceful movement of the gazelle in their rhythmic strides. The brass get their chance to shine and Cootie Williams' muted solo and Ray Nance's more explosive open horn statements are fantastic. The band briefly moves to a heavy swing feel to back Paul Gonsalves' solo, but the original pulse of the music returns as Ellington takes control of the melody with some angular reed lines behind him. After the band finally builds things up to a near-climax, they hold onto one tense chord, bend their sound upward and leave Shepard to end things with a perfectly placed, ascending slide. This song, along with "Pyramid," " Volupté" and "Eighth Veil," help to create the magical musical realm that is Afro-Bossa.