Don Was: The Music Is Paramount 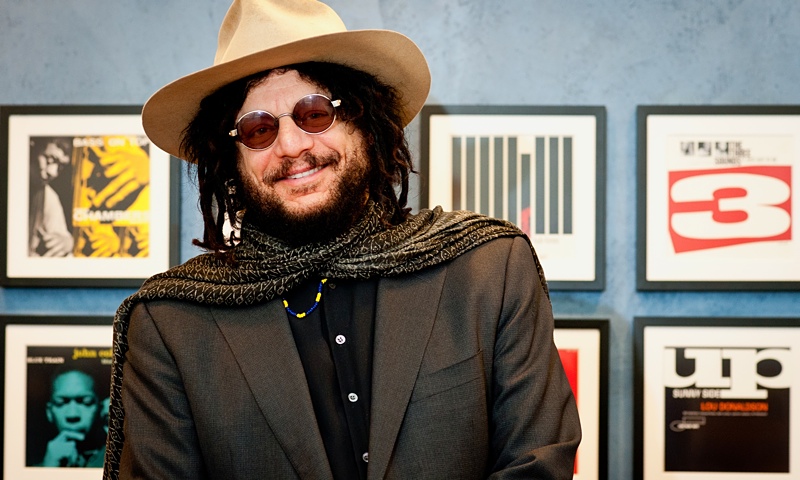 The president of the iconic Blue Note Records, the man who is stewarding the label as it marches into it's 75th anniversary year celebration, comes from the wrong side of the tracks, in a sense. He's not a gut in a suit. He came up through the trenches as a working musician. He liked jazz and played gigs in bunches during his years in his hometown of Detroit. But his adaptability to all kinds of music brought him to fame in rock, R&B, country and funk.

Don Was, co-leader of the 1980s group Was (Not Was) and producer of every Rolling Stones album since 1993, took the baton from Bruce Lundvall in 2012, the latter having spearheaded the revival of the label in 1985. They walk in the footsteps of the fabled Alfred Lion, an immigrant who founded the label in 1939 and steered it into a special place in American music and culture. Lion was ably assisted by Francis Wolff, also an immigrant, who blended his extraordinary photography skills with his producing activities.

The place that Blue Note carved out by the 1950s and 1960s is revered by musicians—both those fortunate enough to have recorded for the label, and younger musicians inspired by those recordings.

"I think they were radical records," said Was, who was a teenager in the '60s when he discovered the vinyl with the smoldering photos by Wolff and the cover design of Reid Miles that often drew eyes to the product before ears. "Even if it was something inside, like Jimmy Smith. What Jimmy Smith was doing on the organ, it was radical. Never mind Unit Structures by Cecil Taylor (1966) or Ornette Coleman At the "Golden Circle" Stockholm (1965), which is actually one of the first Blue Note records I ever got. It was radical, but they were so good about the total package. The playing, the writing, but also the way Rudy [Van Gelder, engineer] recorded the music. The way Reid Miles designed the package and Francis Wolff's photographs. It had quality, ya know? It was one of those few labels you could just drop the needle down and wherever it landed ...You may not know who the leader was on the session, but you recognized it was a Blue Note album and you could probably pick out players from the repertory company."

Was looked at with wonder, like it was sterling silver and not cardboard. Wolff's artful photos of musicians in action, but the backgrounds dark and mysterious. "You can't see the walls. You don't know what kind of space these guys are in. There's cigarette smoke everywhere. They're dressed really cool. Holding a saxophone. I wanted to be like them. I wanted to be one of them. It had incredible allure. Not just music to listen to, but as a lifestyle. That's what it meant to me then," says Was, now 61.

Now that he's filling big shoes, the Blue Note brand "means the same thing, except I feel a responsibility to maintain that. That's the only real difference. To this day, when I put on Speak No Evil [Wayne Shorter, 1965]. From my teenage years, that's always been the music I went to when I lost myself or lost my way or was just feeling blue. When I put that record on, I was in touch with myself and my feelings by the time the side was over, which was about 15 minutes or so. I want it to still be a record company that brings that kind of relief to people," he says in earnest. "I want the music to be released to mean something. Not just there because someone has an idea. We try to have every record, hopefully, get under somebody's skin and become part of the fabric of their lives."

To that end, Was seeks musicians with something to say. He's not trying to get the same groove, musically, that Lion and company were so successful at. He seeks the same impact. A peek at something different. Music of today, and maybe a glimpse of the future. Something that can elicit emotion.

"There was a moment in time where, if you put on the first Jazz Messengers album, the one with both Horace Silver and Art Blakey, you hear Horace Silver throwing in funky church stuff on piano. Art Blakey's playing back beat. You'd have gotten kicked off the band stand at Minton's [famed Harlem night spot where early bebop was hatched] for doing that. If you listen to it now, it sounds very mainstream and conservative. But it was a radical album when it was made and it was pushing the boundaries," says Was. "As a musician who played improvisational music night after night for years, I live at the first rule of improvisational music: don't play the same thing twice. You should always be pushing the boundaries."

Was, born Don Fagenson, played jazz during his time in college and at gigs around Detroit into his 30s. His first breakout, though, was when he formed a group with a buddy, David Weiss. He became Don Was. His partner became David Was and Was (Not Was) was born. It was the 1980s. The group had four albums and forged some funky hits. Eventually, Was turned to producing. (Though he never stopped playing and often contributed on bass or keyboards to albums in which he was producing). Over the years, he has produced projects for an array of heavyweights including Bob Dylan, Bonnie Raitt, Al Green, Joe Cocker, Carly Simon, Ringo Starr, Brian Wilson, Roy Orbison, B.B. King, Willie Nelson, Lyle Lovett, Waylon Jennings, Kurt Elling, Randy Newman and many more. He has received multiple Grammy Awards, including Producer of the Year in 1995.

His outlook toward signing artists to Blue Note, the venerable jazz label, may not coincide with everyone's view.

"Jazz is a very loose term," says Was. "A lot of people don't like it. It means different things to different people. But I think we know kind of the type of music we're talking about when we say this. If we're talking about jazz, even in its broadest sense, the idea is: Do something new every time. That's built into the DNA of jazz. Don't play the same thing twice. So, growth and revolution are the purest outcome of the jazz experience. It should always be changing."

Was is respectful, reverential, about following in the footsteps of Lundvall, he's making his own mark on Blue Note, according to his own inner voice and feel for music, his lifelong pursuit.

"Bruce is a real hero to me. He's probably the only record executive out there who goes back to the '60s with the big labels, who is universally beloved. [chuckles] I've never heard anyone say an unkind word about Bruce. To stay in big record companies like that for an entire career and not have people pissed off at you, that's an incredible testament to the strength of Bruce's character and his integrity and honesty." Was says he still get frequent notes from Lundvall suggesting musicians he should check out.

But running a label, Was discovered, isn't just waiving a magic wand and producing good music. "That was actually the most shocking thing, to me, coming into a record company. You can do maybe 1 percent of all the things you want to do. You can actually manifest one percent of your ideas. If you were playing baseball and batting .010 you wouldn't last very long," he says with a knowing laugh. Nonetheless, Blue Note is forging ahead with plenty of product in its anniversary year, and plenty of exposure.

"I'm really happy. This year we probably have a jazz release coming every month, and it's a really wide range of records. From Bobby Hutcherson with Joey DeFrancesco and David Sanborn and Billy Hart; all the way to Chris Dave. It's a wide spectrum. There's something new coming every month. It's not easy to make that happen."

Was is proud of the direction the label is going, even if some of the roster might not be considered "jazz" by the purists, and even if the music might take different twists. "We're just trying to make good things and be creative and innovative. I want it to be the kind of label that it's always been, whereby a 15-year-old musician goes home and practices because one day he wants to be on Blue Note Records. Which is what I did."

There are movements away from the tradition, even if they have come through it. Like much of jazz since its beginnings. Pianist Robert Glasper is creating music with a soul and groove foundation. Closer to Isaac Hayes than Bud Powell. Singer Norah Jones has a sound that bows to the pop world, even as it creates interesting textures. Ambrose Akinmusire plays the trumpet unlike anyone, and has a musical curiosity that has nothing to do with his instrument. Young trumpeter Takuya Kuroda has a melange of rhythms, beats and grooves on his label debut Rising Son.

"I think Robert Glasper is a very pure jazz artist, even on the R&B flavored records he does," states Was. "I've seen him in the studio. Even when it sounds like they're using loops and all that stuff, it's all played live. It's not worked out. It is improvisation. He's picking up the elements of the time that he lives in and reflecting it in the music. That's what all artists are supposed to do. He reflects the moment that he's in. What he's doing in 2014 is as 'jazz' as what Herbie and Wayne were doing in the '60s on Blue Note. They were reflecting the times.

"Like Miles Davisdid. Miles, you could never nail him down. The minute you could pin down what he was doing, he felt compelled to shock everybody and move on to something else. What's shocking today? I don't think Glasper's record is shocking ... What is there about it that's not jazz? It's essentially a trio going into the studio and improvising on the foundation of a song. Where the chords and the modes are quite complex. Even if the cycle is short. There are more chords than 'So What.'"

He says the roster of artists feel compelled to move the music in a positive way. And they do so with different personalities. "The way Glasper does it is completely different than the way Jason Moran does it. Yet the two contemporaries actually went to the same high school. [High School for the Performing and Visual Arts in Houston] But they approach it differently. You listen to Derrick Hodge, he approaches it differently than anybody else, as does Chris Dave, who has an album coming in the summer on Blue Note.