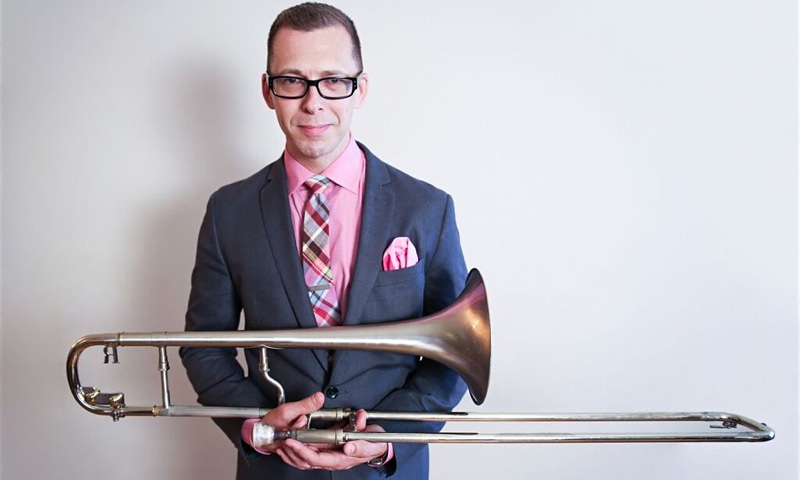 By DAN BILAWSKY
February 22, 2016
Sign in to view read count
It's late morning on Sunday, January 17, 2016—a wintry New York day that will later see snow—and much of Brooklyn seems to be in a state of hibernation or hiding. There are few signs of life on the streets, but there's no shortage of action in the basement of the former Public School 9 Annex. That's where the studio known as Acoustic Recording is situated, and that's where trombonist David Gibson has come to record what will be his fourth date for the Posi-Tone imprint and his seventh leader effort in total. As the session nears its start, Gibson is taking care of business: He's warming up, looking over some parts, and chatting amiably with his band mates to keep the mood light. In short, he's doing what any good leader will do to pave the way for success in such a situation.

Over the course of the first several hours of recording, Gibson demonstrates again and again that leadership is a fluid concept with no absolutes. There's knowing where to begin and how to get everybody into the zone, something that he addresses through Dr. Billy Taylor's churchy "I Wish I Knew How It Would Feel To Be Free"; there's having the flexibility and willingness to make adjustments when things aren't going according to plan, demonstrated with some on-the-fly structural tweaks to bassist Alex Claffy's "AJ"; there's a willingness to simply let the music flow when everything feels just right, exhibited during a metrically-morphing Gibson number dubbed "The Axe Grinder"; and there's an awareness and openness to the thoughts of the other stakeholders in the room. By the time the band breaks for lunch, five songs are in the can—the three aforementioned numbers, a beautifully arranged "Here Comes The Sun," and an appealing take on trombonist Curtis Fuller's "The Court"—and all is right with the recording process.

The same qualities exhibited during the first half of that session seem to also come to the fore in Gibson's other musical goings-on. Whether fronting his own band in live settings, serving as Musical Director for the George Gee Swing Orchestra, putting his skills to good use in pianist Orrin Evans' Captain Black Big Band, sharing his hard-earned knowledge on his blog and in higher education settings, or serving in a strictly supportive role, Gibson remains the consummate professional—knowledgeable, malleable, organized, friendly, and fixed on the task at hand. In short, the David Gibson of 2016 is a pillar in his musical community and a man who could be said to have the world on a string. But that didn't just happen for him. It's something he willed over the course of his development, a non-stop expedition with the occasional bump in the road and a consistently upward trajectory. He's the embodiment of President Dwight D. Eisenhower's quote that "accomplishment(s) will prove to be a journey, not a destination."

In a musical sense, Gibson's journey began during his elementary school years in Mound, Minnesota. That's when he first connected with the trombone, and that's where the initial seeds for his future successes were planted. Gibson showed great promise during his first two years playing the instrument there, but his enthusiasm waned after the family moved to Oklahoma. There, students didn't start playing instruments until the 7th grade, so the budding David Gibson found himself surrounded by neophytes who were two years behind him in their instrumental studies. He was ready to throw in the towel by the conclusion of his middle school years, and had the high school jazz band director not sent him a lifeline, he may very well have done just that. As Gibson recalls, "we received a telephone call from the jazz ensemble director at the high school who had heard of me and wanted to recruit me to be a part of the jazz ensemble. He said to my mom, 'look, just have him come to one rehearsal. If he doesn't like it after one rehearsal, he doesn't have to come anymore.'"

That one rehearsal proved to be a life-changing event for the young David Gibson. It opened his eyes to a different world, one that showed the high yield that comes with great expectations. Looking back on it, Gibson reflects on the influence of his teacher and the key lesson that he learned from that experience: "My director was a military man and he had a real military philosophy about this. He was very hardcore, no nonsense in his dealings. And he did something then that I later learned was so important: He set the bar very high, so everybody reached for it." The experience of working under such a commanding and demanding leader helped Gibson and many of his classmates to develop into strong players with great range and a deep understanding of what it takes to precisely shape the sound of a jazz ensemble. At the same time, Gibson's private studies were helping him to learn the basic ins-and-outs of soloing and, even more importantly, assisting him in developing questioning techniques that would serve to guide him in the years to come.

At the conclusion of his high school years, Gibson moved on to the University of Central Oklahoma. There, he found himself at the center of a jazz program that, not unlike his high school group, emphasized ensemble execution over individual growth and expression. This brought out some feelings of discontentment in Gibson, who readily admits that he probably turned a lot of people off with the attitude he was projecting at that time. He notes, "[In that environment], the showmanship aspect—the veneer—ended up being much more important than the DNA of whatever the story was. So I was looking for a new mentality." That mentality had everything to do with a search for a certain sound and method of expression. "I remember getting frustrated going through that search," Gibson recalls, "because there [was a divide] between the music I was listening to versus what was fed to me. They were telling me to play like Urbie Green, play like Frank Rosolino, play like Carl Fontana, maybe play like Jack Teagarden. But nobody was telling me to play like Curtis Fuller. They weren't even telling me to play like J.J. Johnson."

Ultimately, it would be the influence of Fuller and Johnson—and the great Slide Hampton—that would provide the greatest direction for Gibson while also setting him apart from his peers during his undergraduate years. And it was encouragement from iconic trumpeter Clark Terry that would help Gibson to realize he was really onto something there. While attending and working at Terry's summer jazz camps, the trumpet giant praised Gibson in his pursuit of that Fuller-Johnson-Hampton inspired direction. He also taught Gibson the value and importance of using whatever is at your disposal to "propel the story forward," filling the role of mentor at an important stage in the trombonist's musical and personal development.

To a large extent, Gibson's college experience was about establishing a direction in performance and developing a personalized sound. But it was also about finding a voice through composition. Gibson's interest in writing predated his arrival at the University of Central Oklahoma, as he dabbled in that department during his formative years. Unfortunately, he lacked real training or any sort of road map to follow when he was in high school. That all changed when he set foot on campus. As Gibson was just starting, Vince Norman, who would later go on to become the staff arranger for the U.S. Army's Jazz Ambassadors, was on his way out. The two only overlapped for a single semester, but Norman helped steer Gibson in the right direction by sharing some of his knowledge and pushing him toward, and through, some of the information in Rayburn Wright's Inside The Score.

There was no formal course of study for jazz composition that Gibson could've taken there at that time, but the knowledge gleaned from that book and the guidance and encouragement from Norman helped him to grow by leaps and bounds as a writer. At the same time that he was developing those writing skills, he was also able to use the big band at the school as his laboratory for experimentation. There, he quickly learned what worked and what didn't in the charts he wrote. In discussion, he jokingly recalls learning about the true meaning of "fish paper"—a chart that's so bad that it might as well just be used to "clean your fish on it"—during that period of time. But every one of those writing experiences for Gibson—good or bad—helped him to sharpen his pen and set him up for the next stage in his development.

The arrival at that next stage was bridged by a trip to Rochester, NY, where the International Trombone Association was holding its annual convention. That's where Gibson would go on to win the Frank Rosolino Scholarship, meet Curtis Fuller for the first time, and learn of an opening in the Eastman School of Music's composition program. All the stars aligned there, so Gibson moved to Rochester to study at Eastman upon completing his undergraduate degree. The years in Rochester—the mid to late '90s—would prove to be a major transitional period in Gibson's life. Marriage, personal growth, the birth of a daughter, immersion into a lively musical scene, completion of graduate work, a brief move back to Oklahoma followed by a divorce, and several more years making music in Rochester all came in and out of the picture over the course of (about) five years.

As the millennium was nearing its end, Gibson sensed a need for change. His girlfriend at the time was planning on moving to New York City, and he knew that that's where he wanted and needed to be, so he up and moved there at the dawn of 1999. At that point, he was put to the test in a real pressure-cooker atmosphere, an environment that has sent many a musician packing. But Gibson wouldn't be swayed or deterred by any experiences. Instead, he let any difficulties spur him on. There were a-ha moments to be had in many encounters, and Gibson was open to having them. One valuable lesson came from a respected trombonist who simultaneously gave Gibson some encouragement and advice. "I remember sitting in with Steve Davis at the old Savoy that was at 41st Street on the corner of Ninth Avenue," Gibson recalls. "I sat in on a tune at the end of the night, and Steve complimented me on my playing. But then, in a subtle way, he also taught me an important lesson." That lesson centered on the need to think about the music as much as you think about your own instrument. And it's a lesson that Gibson took to heart, ultimately changing the way he heard the music and himself.