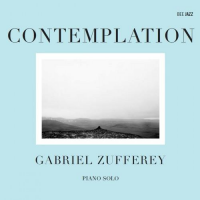 Jazz mashups are in the air. First, pianist Robert Glasper artfully wove pianist Herbie Hancock's "Maiden Voyage" together with Radiohead's "Everything in its Right Place" on the his In My Element (Blue Note, 2007). The Jazz Punks' raucous Smashups (Foam @ the Mouth, 2012) mashed up saxophonist Sonny Rollins with guitarist Jimi Hendrix, and Led Zeppelin with trumpeter Dizzy Gillespie (not to mention John Coltrane with John Coltrane). Finally, pianist Gabriel Zufferey's Contemplation includes two particularly subtle additions to the genre.

In the first, Zufferey uncannily combines Erik Satie's atmospheric "Gnossiene no. 3" with trumpeter Miles Davis's "Nardis," immortalized by pianist Bill Evans. The second purports to mash up Coltrane's "Lonnie's Lament" with saxophonist Ornette Coleman's "Lonely Woman," which sounds like a great idea. It provides a fresh and beautiful take on Coleman, but "Lonnie" remains hidden beneath the surface.

There's a lot more to this solo piano disc than just mashups, but something of the practice's iconoclastic nature—rooted in the hip hop producer's art—pervades the record generally. Like an expert turntablist, Zufferey emphasizes extremely familiar musical source material ("Take Five," "My Funny Valentine," "Tenderly"—really, "Tenderly"?), presented in unusual new ways; and, like a DJ, Zufferey eruditely slips in the occasional rarity (Nat Adderley's "The Old Country," Kenny Kirkland's "Dienda"). Neither Zufferey nor a remix artist dwells long on any one composition. Though the tracks are duly separated—eighteen of them in less than an hour—the set can be heard as a single improvised suite, in which the pianist dexterously piles up musical references.

On Zufferey's previous Hear and Know (Bee Jazz, 2010), the leader surrounded himself with players more adventurous than himself, creating a useful tension. Among his band mates was trombonist Samuel Blaser (Swiss, like Zufferey), who would go on to make the very strong Boundless (HATology, 2011).

On Contemplation, Zufferey provides his own tension, restlessly and intelligently mixing up the compositions, including a handful of his own. His playing is omnivorous and precise, and could stem from any one of a number of sources. He nevertheless seems particularly joyous amidst the percussive, jagged abandon of Thelonious Monk's "Trinkle Tinkle," and the pianist's influence is, here and elsewhere, filtered through Cecil Taylor's rigorous aggression.

Zufferey's approach to the extraordinarily well-known music he interprets is not reverential—but it is far from irreverent. On balance, Contemplation is a ringing endorsement of the continuing relevance of the canon (even as the pianist's contemporaries turn to Radiohead). Frequently, he is able to wrest fresh insights from old warhorses.

Nowhere more so than on Coltrane's "Giant Steps." The original and more than a few of the well-known versions bound athletically across Trane's difficult harmony. Zufferey's "Steps" is ethereal, pensive, at some points pianissimo, notes falling like stars lighting up in a constellation in the evening sky. Ironically, perhaps, it's the longest track here, at almost six minutes—sometimes a more leisurely old-school approach to exploring a tune is worthwhile after all.