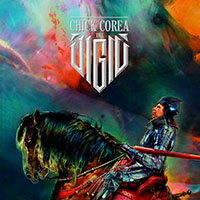 While he's never come close to falling out of the spotlight, there's little denying Chick Corea's two Return to Forever reunion tours and resultant live recordings of the past half decade have been two of the keyboard star's most eagerly anticipated events, considerably raising both his visibility and viability. That The Vigil—the name of both his new group and its much-anticipated debut recording—has been garnering even greater buzz only means that there's a whole lot to live up to.

The good news is this: The Vigil is certainly Corea's best electric album in decades, and one which capitalizes on the fact that blending acoustic and electric music together under one roof is no longer the anathema it once was. With the reestablishment and general reacceptance of instruments like the Fender Rhodes and synthesizers, what was an initially far riskier proposition back in the day—one which quite literally polarized the jazz world—is no longer problematic for many jazz musicians and fans. Even before after the dissolution of the guitar-centric, Al Di Meola-era RTF, Corea had already begun to reintroducing acoustic instrumentation, but it was on post-Di Meola solo albums including The Leprechaun (Polydor, 1976) and, in particular, The Mad Hatter (Polydor, 1978)—which contains what has become a mainstream standard, the mightily swinging "Humpty Dumpty"—that Corea found a more balanced approach, one that allowed him to consolidate many of his eclectic musical interests.

Still, he's not made a single recording of new material anything like The Vigil in decades—if ever. Of the album's seven lengthy tracks, only the lyric-driven "Outside of Space," featuring a guest appearance from Corea's wife, Gayle Moran Corea, clocks in at less than eight minutes, while three run from eleven to nearly eighteen minutes. Few do "epic" like Corea, and certainly some of The Vigil is as flamboyant and grandiloquent as anything he's ever done in the realm of excess, but it's the balance Corea has found between thundering fusion grooves, lighter Latin-centric polyrhythmic complexities, pure, unadulterated acoustic tonalities and some serious mainstream/modal swing that makes The Vigil such a smashing success from start to finish. It's an album that combines the best of RTF and Corea's Joe Farrell-era solo recordings with more recent fare like the wide-released The Ultimate Adventure (Stretch, 2006), self-released Rhumba Flamenco: Live in Europe (Chick Corea Productions, 2005) and Japan-only Super Trio (Stretch, 2006). Confluence, these days, seems to be the goal of many an aging jazz musicians with broad-reaching careers, but few have managed to bring so many diverse elements together this seamlessly, creating such an utterly eclectic yet unequivocally unified whole, as Corea and The Vigil.

While the touring bass chair seems to be a bit of a revolving door—and there's a couple of guest appearances on the recording as well—Tim Garland is key to the group's stable core. The British woodwind and reed multi-instrumentalist, beyond being a leader in his own right, is far from new to Corea fans, having played in the latter period of the pianist's acoustic Origin group responsible for two single CD releases and a tremendous live box set just before the millennium turned—Garland appearing on none of them, but nevertheless documented on one disc of Corea's 10-DVD Rendezvous in New York (Image Entertainment, 2005) box. Since then, he's invited the pianist to play on his own superb orchestral project, The Mystery (Audio-B Ltd., 2007), returned the favor by orchestrating five tunes from Corea's repertoire with longtime duo partner Gary Burton for The New Crystal Silence (Concord, 2008), and subsequently participating as a member of the titular five-piece on Corea's ambitious The Continents: Concerto for Jazz Quintet & Chamber Orchestra (Deutsche Grammophon, 2012).

In a nutshell, he is not just the most accomplished and best-fitting wind/reed multi-instrumentalist Corea has had in a band since the late Joe Farrell—who first appeared with the pianist on the very early Tones for Joan's Bones (Vortex, 1968); was a charter member of the first Return to Forever and subsequently returned to the post-guitar RTF of the nevertheless tepid Music Magic (Columbia, 1977) and more impressive Return to Forever Live (Columbia, 1978); and remained an essential part of almost every Corea solo project between 1976 and 1980—Garland has also, with more than a decade's history between them, become Corea's most longstanding saxophone/flute partner, and one who also adds bass clarinet to the mix.

Bassist Hadrien Feraud first came to attention when he toured North America with John McLaughlin's then-nascent Fourth Dimension in 2007, after appearing on the fusion guitar hero's Industrial Zen (Verve, 2006), but he'd not escaped Corea's eyes and ears either, appearing on the Brooklyn, Paris to Clearwater set that was part of the pianist's (shamefully) Japan-only Five Trios (Stretch Records, 2007) box. It's great to hear him back in the North American spotlight and, with a few more years under his belt, the 29 year-old bassist has also managed to balance out his impressive chops with some attention to space.

Marcus Gilmore may be relatively new to Corea's circle but, since emerging in the new millennium as a member of Vijay Iyer's longstanding trio, the drummer has already proven himself easily capable of everything from mainstream pulse and liberated free play to M-Base funk with everyone from Steve Coleman and Lionel Loueke to Dave Douglas...and, ultimately, Corea himself, on The Continents. Which leaves guitarist Charles Altura, who really is the Vigil's X-Factor: an almost completely unheard-of six-stringer about whom little can be found, other than appearing on three tracks of Tigran Hamasyan's Aratta Rebirth (Plus Loin, 2011), a couple tracks on Stanley Clarke's The Stanley Clarke Band (Heads Up, 2010), and the promise of a debut recording under his own name that, to feature young phenoms Ambrose Akinmusire and pianist Taylor Eigsti, certainly merits a most watchful eye, based on his performance here. With The Vigil, he adopts an electric tone reminiscent of Allan Holdsworth's satiny smooth overdrive, but proves equally adept on acoustic guitars, as he rounds out a group that also features Pernell Saturnino on the album's opening three tracks—and, while the percussionist is not a part of the touring band himself, Corea clearly felt his addition significant enough to make space for a full-time percussionist, Luisito Quintero.

Corea's writing for The Vigil may represent some of his most challenging—though tough charts have long been synonymous with the pianist, irrespective of context. "Galaxy 32 Star 4" opens the album with fusion fire and the immediate assertion of Rhodes and synth tones, overdriven electric guitars and a complex blend of contrapuntal lines and powerful kit work. After a suitably impressive opening Rhodes (or, to be more accurate, Rhodes sampled) solo, Feraud gets his first feature of the set, demonstrating he's lost none of his youthful verve, while Garland, who follows on soprano saxophone, proves that advancing age (as he nears 50 in 2016) is no deterrent, though his ears seem more open to what's going on around him, as he takes a number of significant pauses before responding and driving the music forward, handing the baton to Altura, who takes a searing solo that's no less virtuosic, but juxtaposing light-speed bursts with similar pauses to take in and respond to the gradually intensifying support of Corea, Feraud and Gilmore.

"Planet Chia" retains some of its predecessor's energy, but with a more Spanish-tinged vibe that features Corea and Altura on acoustic piano and nylon-stringed guitar respectively, their unison lines tripled by Garland, again on soprano, while "Portals to Forever" occupies an intriguing middle ground, with Corea returning to Rhodes as Altura, back on electric guitar, engages in a lengthy trade-off with Garland, this time on tenor, the two building to a high octane middle section where Corea, on synth, goes head-to-head with Feraud in some of the set's most ferocious playing, all bolstered by Gilmore, who doesn't need a lot of solo space to demonstrate his value to this group.

Corea doesn't forget either his mainstream beginnings or freer proclivities of the late '60s/early '70s either, though there's nothing approaching the completely avant-garde work of his Circle group, with Anthony Braxton, or The Complete "IS" Sessions (Blue Note, 2002) of 1969. Still, "Pledge for Peace"—the only track that appears to be a live recording—swings hard, with guests Stanley Clarke and tenor saxophonist {Ravi Coltrane}} replacing Feraud and Garland, and with Altura sitting out, for nearly 18 minutes of modal explorations and unfettered freedom, couched within Corea's structured contexts as a clear (and, in the liners, documented) homage to Coltrane's father, the late John Coltrane. "Royalty"—dedicated to the great Roy Haynes, who played on another early Corea gem, Now He Sings, Now He Sobs (Solid Statem 1967)—features the core group, sans Saturnino, on a waltz-time tune that doesn't reach the same incendiary heat, but swings with similar intent and featuring, following Corea's lengthy piano solo, turns from both Garland and Altura that suggest that when they do play "Pledge for Peace" on the tour, it'll be just as free-spirited and hard-driving as the version on the record.

The positively electrifying "Legacy" closes an album with but two flaws: the cover, a clear harkening back to '70s artwork like Romantic Warrior but, nearly forty years on, as cringe-worthy as Corea's lyrics to "Outside of Space" which, while featuring Garland's positively gorgeous (and, to a large extent, redeeming) bass clarinet solo, suffers from Moran's pitch-perfect but utterly soulless delivery. The Vigil may be a debut whose five-star rating is marred, ever so slightly, by these two relatively small quibbles, but introducing Corea's best band in decades—and, perhaps, the only one truly capable of managing a tough book of music that consolidates a career now entering its sixth decade and still driving forward with relentless energy—let's hope it's just the beginning of a project that goes well beyond the usual album-tour-live album cycle to continue as Corea's main creative vehicle for years to come.