By Lawrence Peryer
November 6, 2011
Sign in to view read count 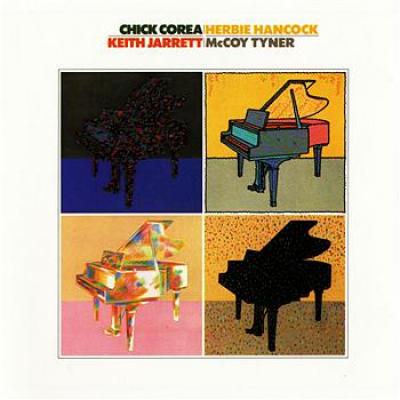 Atlantic Records issued this collection 1976, featuring two tracks each from four of the most important pianists in the post-bop era. Excepting one piece, each pianist is represented here in trio format.

The Keith Jarrett and Chick Corea offerings are from their own 1966 sessions as leaders. Jarrett contributes two original compositions and is joined by drummer Paul Motian and bassist Charlie Haden in pleasurable but somewhat conservative outings.

Corea brings two different lineups: Joe Chambers on drums and Steve Swallow on bass alone for the pianist's own "Tones for Joan's Bone's," while trumpeter Woody Shaw and saxophonist Joe Farrell join in for the pianist's "This is New," which contains the first really interesting (not just tasteful) piano work of the album. Corea's solo that begins at about the 2:30 mark is solidly hard bop, but his comping behind Shaw's solo is quirky and angular. From a sequencing perspective, this track was an inspired choice with which to preface the McCoy Tyner section of the program, setting the stage for the John Coltrane alum's more aggressive, driving work.

Tyner's tracks come from his earliest sessions with Coltrane, during three legendary days in 1960—October 21, 24 and 26—which resulted in not only the saxophonist's My Favorite Things (Atlantic, 1961), but over 20 additional tracks the label would issue over the years. Featuring the saxophonist's rhythm section of bassist Steve Davis and drummer Elvin Jones it is impossible to know why Coltrane sat out these takes, but they become in effect Tyner's first recordings as a leader. Both of his songs, a rave-up of Coltrane's own "Lazy Bird" and an assured take on Dave Brubeck's "In Your Own Sweet Way," are only available on this collection, their rarity and performance alone making Chick Corea, Herbie Hancock, Keith Jarrett, McCoy Tyner an interesting record for fans and collectors.

Herbie Hancock's work here is credited to him as a leader. but comes from Ron Carter's sessions with drummer Billy Cobham that would form the bassist's seminal Uptown Conversation (Embryo/Atlantic, 1969). Both are Carter compositions and catch all three players on the cusp of their subsequent electric excursions. The first number, "Einbahnstrasse," is a smoking bop jam, with some fine, fine interplay between drums and piano. The best is saved for last, though, with "Doom" featuring an ominous bowed solo intro by Carter, which leads to ethereal accompaniment from both Hancock and Cobham; a very unique and hard-to-shake piece.

In 1976 Atlantic was sitting on a cache of recordings featuring four musicians at or near their artistic and commercial peaks. Their attempt to capitalize on that, as they had done so well with their Coltrane masters in the years immediately following his death, certainly resulted in a treat for fans of these important pianists.

Margot; Love No.1; Tones For Joan's Bones; This Is New; Lazy Bird; In Your Own Sweet Way; Einbahnstrasse; Doom.