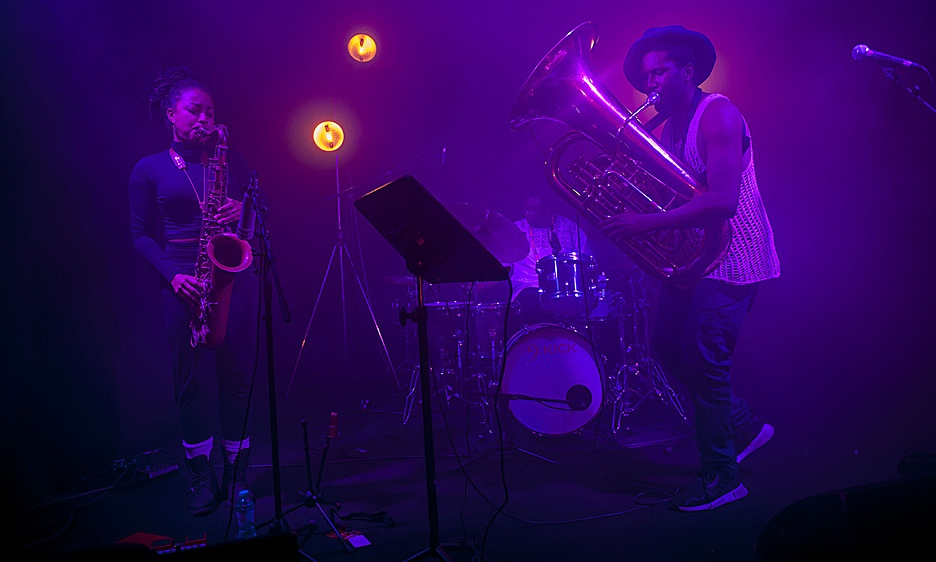 The Brussels Jazz Festival is a relative newcomer, but this ambitious 10-dayer managed to sell out around two thirds of its gigs, and was overall the most successful in attendance for this fifth edition. Concerts are held in the two main studios of Flagey, a 1930s Art Deco radio broadcasting complex in the Ixelles area, just south of the city centre. It was saved from demolition in the late-1990s, and lovingly preserved for reopening as a cultural centre in 2002. For six of the nights, there were also late party sets in the Flagey foyer bar area, packed with standing crowds.

Amongst the highlights on its main stage was a double bill that opened with the first performance by the duo of keyboardist Craig Taborn and drummer Dave King, then continued with trumpeter Ambrose Akinmusire's quartet.

Even though this was the debut public Taborn/King show, the pair were both born in 1970, and attended the same school in Minneapolis. Despite a truckload of the keyboardist's equipment suffering an airline delay, this was no handicap, as Taborn triumphed, and we would never have suspected any loss had he not informed the audience of his trauma halfway through the set. The pair's energised rapport was not diminished. Taborn split his cranium between acoustic piano and electric Fender Rhodes, whilst King was divided between core kit and added electro-pad, apparently of a retro nature, for those who study this gear. Low tones were coaxed out by rubbing, then King made contained scuttles, as the pair's rhythmic push was maximised. Notes split apart on the electric piano, and electro-skitters ran with independent intelligence. The joy of this duo comes from the way in which both of their minds are split between acoustic and electric tools, constantly jumping ship, then slopping back onboard.

Ambrose Akinmusire's quartet has been evolving at a frightening rate: each time witnessed during the last few years, they've upped the freedom, the confidence and the intensity, beaming in the rapport that comes with repeated work and membership stability. They are travelling further and further out to the abstract realms. As months pass, their subjective reality is sharpening. During "Tides Of Hyacinth," it was apparent that pianist Sam Harris is getting more into electronics, and that the collective, cumulative, rippling flow is almost like unto that of The Necks. Akinmusire's music has now grown a monumental extremity, a giant Devil's hoof of expressive devastation.

For the first half of their set in the main studio, Antonio Sanchez & Migration sounded like the bad side of Airto & Flora, their extended forays full of Thana Alexa's scat vocals, precisely combined with the band's equally intricate fusion contortions. Singing like an instrumentalist, she didn't leave much space. John Escreet's repetitive Rhodes phrases provided another crucial spine, and tenor man Chase Baird further upset our ears when he switched to EWI (electronic wind instrument). Alexa also frilled her output with effects, with Escreet turning to acoustic piano in response. It was around this point that a pair of trio spotlights for extended solos (Escreet and Baird) took the set into an inflamed zone, and then Alexa's vocals were heard at their best when she sung solo, actual words having room to soar, assisted by a tone- loop self-extension that she'd set in place. Of course, Sanchez himself almost operated in his own universe, possessed of remarkable energy and precision. The last half hour was a different entity completely.

With Belgium being the birthplace of Django Reinhardt, it's pleasing to find that gypsy jazz guitar has a special place at this festival. The violinist Tcha Limberger played an afternoon kiddie session, but his audience sat with rapt attention, as he acoustically embraced the space of the medium-sized Studio 1. Limberger also played guitar, joined by his trio members on upright bass and second guitar.

A few days later, in the same venue, the Canadian outfit Brishen, were led by Quinn Bachand, who also switched between fiddle and guitar. His core trio was expanded by the guesting Belgians Gwen Cresens (accordeon) and Ben Faes (upright bass), exploring a more evolved type of gypsy tradition, unusually jazzed up by the reeds of the frequently soloing Eric Vanderbilt, who began on clarinet, then moved to the tenor saxophone. Cresens didn't join the other four until the third number, a Mexican ballad that had Bachand picking up his fiddle. The leader sang on "Cheyenne," then there was a guitar and accordeon duo, followed by Duke's "Temptation Rag," with accordeon and clarinet giving it an altered state. These boys are prime entertainers, besides delivering the sophisticated musical goods, they swapped instruments for the encore, with Bachand on kazoo, in a pisstake free improvisation, gypsy-swing style.

Talking of improvisatory adventuring, there were examples of a purer form in this same Studio, around the same days. The Antwerpian piano trio Donder thankfully justified their existence in a crowded corner by working in a select parameter of almost-silence, their set taking on the shape of a ritual, sparse and carefully judged, with each gradual revelation being drip-fed to the entranced audience with a water-torture pace. This is a positive assessment! Combinations of bowed groan-bass, chiming piano notes and tolling cymbals intervened when silence became too much, with the keys usually being the most active, periodically unveiling a melodic progression, whilst the other pair of players scratched and fidgeted around in the dim light.

The next day, by way of complete contrast, but still speaking improvisation, the Dutch teaming of Niels Broos (keyboards) and Jamie Peet (drums) demonstrated what can be done with free-form groove-fusion sounds. Clearly inspired by the Californian Brainfeeder mission, they took electronic beats and retro electronics towards a more abstract existence, never relinquishing the opportunity for head-nodding complexity. With a very extended build-up, the funk was a long time coming, teased continually, but not quite released. Once uncaged, though, Peet showed off his unpredictable rhythmic accents, and Broos danced from keys-to-keys, their duo fusion palette being extraordinarily wide.

As with last year's festival, the 2019 BJF invited a significant cluster of UK acts (get 'em while you can!), beginning with trumpeter Yazz Ahmed. She brought her medium-sized band incarnation, the quintet including George Crowley on bass clarinet, opening with around 25 minutes of unbroken music, smearing three tunes together. Power gathered with thickened trumpet electro-echoes, initially treading carefully, with a split-ended flugel solo leading up to a scintillating vibes solo from Ralph Wylde.

The roots of the recent Thrill weekender in Edinburgh lie in an initial collaboration between players from that city and Brussels, the Thrill Sextet featuring three denizens of each. The Thrill festival itself saw a large Belgian posse invading the Scottish capital, playing multiple gigs. This taster project in Brussels was a quieter affair, and mellower than many of the subsequently Edinburgh-visiting bands. The repertoire was penned in preceding days, and this set cohered well. With the vocals of Irini Arabatzi, the thrill became the trill, as her mostly wordless semi-improvisations matched the instrumentation very closely, but avoiding the cliché pitfalls of such close-streaming. At first she was floating, but then the themes became softly staccato, scattered with slight stutters and tongue clicks, subversively introducing an avant-language into a mostly mainstream fold. Arabatzi's stylistic leaning was just as much towards Reich'n'Glass as scat.

A flowing tenor saxophone solo followed, courtesy of the Brussels composer/reedsman Tom Bourgeois, gaining toughness as it developed. Some stretches were not so much compositions but rather impressionistic sketches, with minimalism being a marked influence, even if found in a jazz form. There were frequent hints of an open, anarchic spirit which never quite wriggled loose. The Scottish composer/bassist Mark Hendry provided his own input, with a optimistically summery song, near to the end, but there was the sense that Bourgeois was the assertive force in the ranks, whilst Arabatzi made the most individual contributions.

Theon Cross is renowned as the accelerated tuba-dancer for Sons of Kemet, and his own trio Fyah is no great distance away from that vibration, with tenor saxophonist Nubya Garcia favouring her more linear, riff-based aspect, emulating the driving qualities of Shabaka Hutchings. The advertised drummer Moses Boyd was absent, sadly, but Benjamin Appiah filled in well. Playing late at night, on the smaller foyer stage, this was the ideal time for Fyah partying, with the crowds coalescing from the evening's earlier sets. The atmosphere was stepping quake!

Another side of Garcia was seen on the following night, which was the festival's final blast. This time she was in Studio 1 with Maisha, a collectively styled London combo dedicated to a spiritual jazz aura, infused with Afro-Caribbean juices. She selected flute at first, as the set underwent a shimmering growth, a subtle pulse providing the foundation as Garcia picked up her tenor, for a warming solo. It's good to hear a conga player in such a prominent sonic position, framed by a democratic sonic spread, as Tim Doyle worked closely with drummer Jake Long, who is Maisha's leader and composer. Shirley Tetteh's rhythm guitar was subdued and sensitive, closely aligned with the bass as she picked out prickly repetitions, but she rises up when it's time for a solo, becoming the band's focal point. Twm Dylan's completely solo bass break also impressed, with its fulsome, singing sound. Tetteh scooted off again, and the Moroccan Gnaoua metal percussion came out. There's a collective strength here, but when it's time for solo showing off, Maisha holds many individualist strengths.