Tcha Limberger was born into a musical family of old, with each member playing musical instruments (his grandfather was the legendary Piotto Limberger). His Manouch tzigane father, Vivi Limberger, and his Flemish-born mother Lut Bruyneel each inducted him into their own culture.

As a young boy, Tcha was bent on becoming a flamenco singer. Aged twelve, he started out on the clarinet, joining the family orchestra, the Piottos. In due course, he swapped the flamenco guitar for a Django guitar, learning how to play with the likes of Koen De Cauter and Fapy Lafertin as he went along. At the instigation of Dick Vanderharst and Herman Schamp to name just two, he learned how to analyse music, considerably widening his horizons in the process.

When Tcha turned seventeen, he took up the violin and by the time he was twenty-one, he left for Budapest where he took classical and zigane musical classes from Horvat Bela. Following his return, he went on to play in or set up a number of orchestras, making quite a few recordings as a freelance instrumentalist... 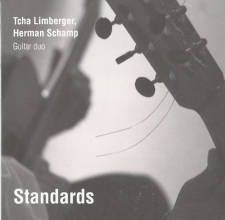 All About Jazz musician pages are maintained by musicians, publicists and trusted members like you. Interested? Tell us why you would like to improve the Tcha Limberger musician page.