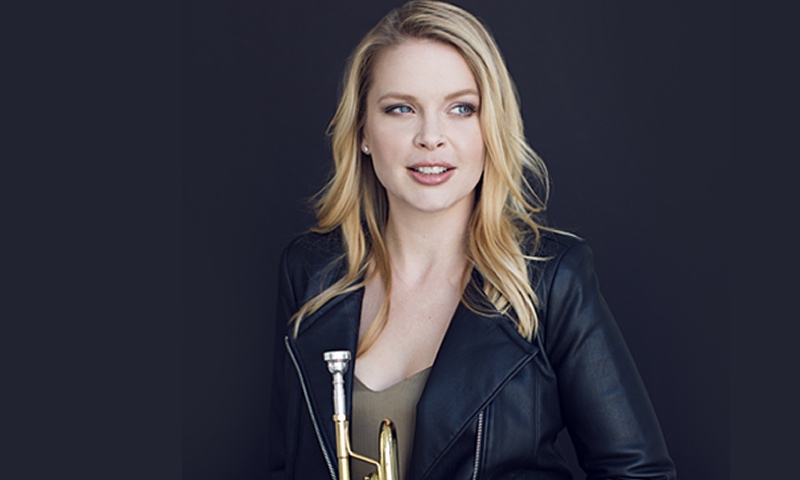 It's like you have these wings... you can glide anywhere your imagination can take you
&#151Bria Skonberg

Bria Skonberg's roots are in a city more than 2,000 miles—and a different country—away from New Orleans and the traditional jazz music identified with region at the mouth of the Mississippi River. But when she puts her trumpet to her lips and plays, whether with her own quintet or another formation, running through a standard or original song, the spirit of the Crescent City emerges.

Traditional jazz—particularly Louis Armstrong—is what first inspired the young girl in Chilliwack, British Columbia, to follow the musical road and take the fork that led to jazz. Her strong chops and brisk attack on trumpet have led her to the music mecca of New York City and fostered a strong career. She plays venues around the world and can be seen at all the major festivals. (This summer will mark her first appearance at the Montreal International Jazz Festival).

"My number-one hero is Louis Armstrong, for many reasons," she says. "He was an innovative, great, incredible trumpet player. An excellent communicator of songs and lyrics and rhythm. And a great human being. He was a great humanitarian. When he met people, he took them at face value."

That style isn't the only thing in Skonberg's bag. She is a serious player who incorporates all aspects of jazz. She listens to all kinds of music and that has an effect on her playing as well. As does life in general. And she sings. Quite well, in fact. Like her trumpet, her voice is bright and expressive; her phrasing brings a story enchantingly to the listener.

It has all been woven into a career that is on the rise. Signed to Sony Music Masterworks' OKeh Records, her well-received first recording on that label, Bria, came out last year. On April 2, it won the Juno award in Canada, the highest music award in that nation, similar to a Grammy, in the Best Vocal Jazz Album category. A second album has been recorded and comes out in May.

Skonberg has an incandescent charm and a striking smile. Her exuberance comes through on the stage where she has a natural rapport with an audience. It also comes through when she talks about jazz in general and her new recording.

"The album that was released in September was kind of a milestone for me, in that it helped me harness finding my voice. How my singing and trumpet come together with all the sounds I'm interested in," she says. "I'm often inspired by older styles of jazz—New Orleans, Ellingtonian type stuff. Sidney Bechet influences. It takes everything that I accomplished, as far as pulling together my style, on that album. The new one bumps it up with more adrenaline and excitement. I think it's pretty uplifting. What can you do in this cray world climate we're in? I wanted to put some love and positivity out there. Try to keep things upbeat."

Jazz, she says, is "the closest I can get to flying. When you have a good rhythm section, it's like you have these wings that support you and you can glide anywhere your imagination can take you. It's a beautiful, very free feeling to improvise. And it's about getting a sense of people's character when you hear them play. You get in situations where your on the bandstand with people for the first time and you don't even speak the same language. Yet you're able to communicate with music. That's really fun to me, to get a sense of people's personalities without saying words, is really fun. Or to listen to what you have in common is exciting."

Those flights of fancy carried her to France, Scotland and Hungry in March. The release of the new album will bring about a U.S. tour. The release party will be June 2 at the Highline Ballroom in New York City, part of the Blue Note Jazz Festival.

"It's really exciting. I wanted to capture the sense of love and adventure," she says of the new project. "Some of the tracks have 13 pieces on it. Everything from viola to trombone to marimba. On top of my regular quintet rhythm section. So there's a lot of different soundscapes going on. I'm lucky, thanks to the label support, to say, 'I have some ideas. Now I can try to exercise them.' There's a mixture. There's a few original songs on there, but there's stuff like 'Cocktails for Two,' inspired by Spike Jones. There's also an underlying theme of strong women. There are some nods to Peggy Lee and Nina Simone. I did one for Valaida Snow, who was a trumpet player in the '30s and '40s. There are standards. 'My Baby Just Cares for Me.' 'High Hat Trumpet and Rhythm.'"

Gil Goldstein did some arrangements for the record.

But performing, recording and writing, as vital as they are, aren't everything for Skonberg. Last year she started a jazz camp in New York with a friend, singer Molly Ryan. "It's called New York Hot Jazz Camp," says Skonberg. "It's for adults, really. The main one is for adults. It's a week-long camp [May 15-21 in 2017] that's held in Greenwich Village, where we have classes. People of all different musical backgrounds and playing experience can come and learn how to play in small-combo, traditional-style jazz music. It's a great place to start your education and learn how to improvise and do those kinds of things. That's where the music started."

Where the music started for Skonberg was back in Chilliwack. Her father played trumpet and her mother played some piano, both as a hobby. Her parents are public school teachers and encouraged Skonberg and her brother and sister to take up music. She started playing piano at the age of seven. "We also did a lot of sports and were parts of organizations that put on events and things like that. They were very supportive of getting involved in the community and keeping your options open."

Chilliwack "had a very good school music system. In my high school, by the time I graduated, there were two concert bands, two jazz bands, a Dixieland band, a steel drum band, an R&B band, a guitar ensemble, a jazz choir, a concert choir. The culmination of all those things is that once a year we got the Chilliwack Jazz Festival. They'd bring in pros from different parts of the world, the U.S. and Canada. In a place like New York, maybe it doesn't seem that exciting. But when you live in Chilliwack, it's a big deal," she says with a chuckle.

"They did a good job of incorporating the youth into the festival, so we played our one or two sets. Then we got to see real people playing classic styles of jazz. It was definitely a high. I got involved in it and got inspired by it."

At her middle school it was time for students to choose their instrument. It appeared she was headed for the trombone, "but my father said, 'Nah. You want to play the melody.' So I said OK," and off she went with the trumpet. "I took to it. I loved playing the trumpet in both the jazz band and the concert band. When the combo, smaller band stuff opened up, I gained more freedom. I was doing a lot of different things in high school."

A counselor encouraged her to try out for a music school. She ended up going to Capilano University where she got a degree in jazz performance on trumpet.

The singing part of her career also began in Chilliwack. "I loved singing as a kid, but believe it or not I was pretty shy growing up," she recalls. "I think playing trumpet gave me a lot of confidence. But in ninth grade we had a musical in the school and I was Sandy in Grease. So I got to sing "Hopelessly Devoted" and all those great tunes. That opened me up a lot to being comfortable with singing. Then I got to sing with a local big band, mostly made up of teachers and older adults. I got to play trumpet and sing with them. That helped me a lot."

Her main influence as a vocalist is Anita O'Day. "She sings like a horn player. She's always paraphrasing, manipulating rhythms. She's so much fun to listen to. Her voice has this kind of raspy quality to it that I enjoy."

In Canada, now a professional musician, Skonberg managed a few bands, including an all-female band called Mighty Aphrodite. "Between that and my other band, the Big Bang Jazz Band, we'd go to festivals. Festivals are an excellent place to meet a lot of musicians from all over. So I had met people from New York City. By the time I moved to New York in 2010, I had a pretty good network of musicians. June Fryer, a trombonist, he helped me get established in New York and meet a lot of local players.

The two recorded an album in New Jersey in 2008. Skonberg at that time was taking trips to New York from time to time. "I got to meet people like Anat Cohen and Howard Alden. All these wonderful players." Her name began to get around. She moved to New York in 2010. Like most young musicians getting their first taste of the Big Apple music scene, she did a lot of subbing, played with different groups and made sure to "sponge up the whole experience, which is still fun and challenging. As I started to step out with my own music and my own groups, I got more recognized as a unique voice on the scene."

In 2012, she released So Is The Day (Random Act Records), with original songs and standards. It featured a duet with John Pizzarelli. In 2015, a year after her second album, Into Your Own was released, the trumpeter received the Jazz At Lincoln Center Swing! award.

"I think music and jazz, personally and career-wise, has opened up the most possibilities," she says. "There are an infinite number of possibilities, which is why I find it exciting."

Jazz takes the effervescent Skonberg around the world. It gives her wings. It challenges and engages her and she relishes the continuous evolution that takes place when pursuing art.

"I work on it every day. I always know I have more to learn," she says with a combination of awe and confidence. "It's not a question of 'if.' The thing about jazz is that it reflects the human experience. So as I have more experiences, it influences and informs my music. When I travel or play or talk to people, anything big or small, I try to take that experience and put it into the music.

"As I start to put more of myself into the music, I realize that like-minded people have gravitated back. The more that I grow, the more I realize other people will find me and I'll find them. It's a beautiful thing. Very satisfying."