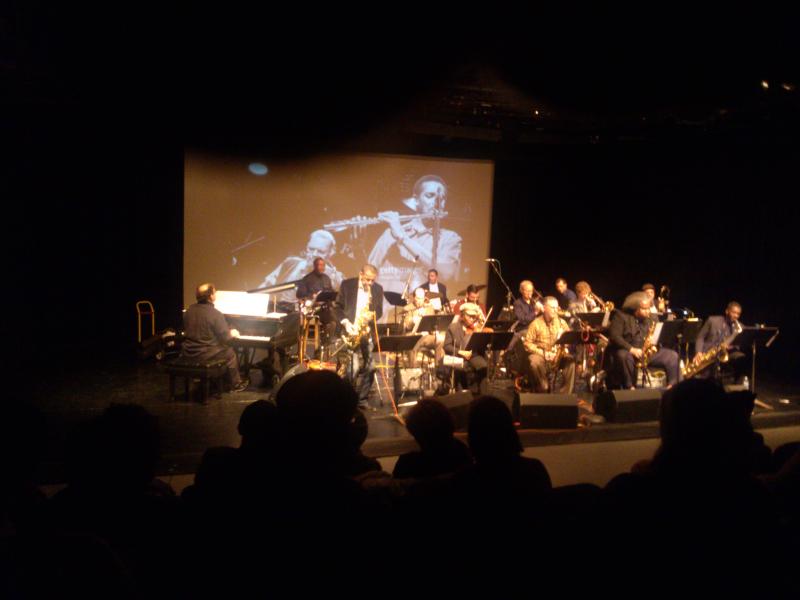 Philadelphia's own Bobby Zankel and the Warriors of the Wonderful Sound keep reeling off exciting concerts in their ongoing series at the Painted Bride. This one featured saxophonist Rene McLean as the guest artist. He is the son of legendary saxophonist Jackie McLean, so the stage backdrop displayed a slide show that included nostalgic images of Jackie throughout his career, and two of his standards were featured in the concert. Rene McLean is an innovator on his own, teaching and performing around the world and currently residing in Hartford, CT, where he is Professor of African-American music at the Jackie McLean Institute and Master Artist-in-Residence of Music at the Artists Collective.

On this night, McLean's lean style of playing stood in sharp contrast to the powerful sound of the Warriors, which made for an interesting musical interaction between the two. Zankel, who is much more likely to let all the stops out, nevertheless loves the way that McLean plays carefully crafted phrases without a lot of fanfare: "Rene is the real deal. He has a sound no one can match. I love his rhythmic phrasing, use of space, and concentrated development of short motives. Rene grew up around Sonny Rollins, John Coltrane, his father Jackie, and Miles Davis. He knows what greatness and genius are. He is a master." McLean has internalized the influence of these and other greats into his own unique approach. His penchant for short, carefully structured phrases is like Davis,' and his sound is his own blend of Rollins, Trane, and Jackie—tight and lyrical at the same time, with a slight touch of Rollins' grit.

The concert began with Jackie McLean's standard, "Appointment in Ghana," in a stunning arrangement by Zankel that blew the lid off this hard bop piece. Zankel, alto player Julian Pressley, and violinist Diane Monroe provided graceful solos backed by the band's emphatic riffs. It was followed by Renee McLean's "Rites of Passage," arranged by Zankel in a bright, driving style that characterized the Stan Kenton and Woody Herman big bands, with a touch of Charles Mingus' darker undertones. McLean soloed with panache, interjecting subtle and surprising harmonic changes, while pianist Tom Lawton and trumpeter Josh Lawrence delivered intensified elaborations. Baritone saxophonist Josh Lee, who is new to the band, added a quieter, cool jazz touch a la Gerry Mulligan.

"So Hot" is a spark filled jagged edge composition by Zankel that takes off and ends up in high altitude. It gave soloists McLean, Lawrence, valve trombonist John Swana, and percussionist Francois Zayas opportunities to go their own ways while the Warriors created organized mayhem behind them. Things cooled down with a lovely "Morning Prayer" composed by Rene McLean in a Zankel arrangement featuring solos by McLean, Lawrence, and Lee Smith playing the h—out of his bass guitar.

Rene McLean's "Bird Lives" in a solid arrangement by Zankel served as a perfect foil for McLean and trumpeter Stan Slotter to work out on. In what was a highlight of the evening, alto saxophonist Pressley beamed out rapid-fire quadruple-time bebop improvisations that would have had Charlie Parker jumping out of his skin. And the evening came to an exciting conclusion with what has become a signature tune for the Warriors, Zankel's "The Next Time I See You," which gave just about everyone a chance to solo in a familiar context.

The Warriors' long tenure at the claustrophobically intimate Tritone club, where they honed their wares, shaped them into a crack big-band unit. More than that, Zankel's familiarity with the avant-garde, most notably pianist Cecil Taylor, along with his studies with guitarist and influential teacher Dennis Sandole, has given him consummate arranging skills at a very high level of sophistication and expression. And his policy of inviting the most creative guest artists to work with the band enriches every program and expands the players' consciousness. The Warriors are a welcome fixture in Philadelphia, steeped in tradition but paving the way for the future. They deserve far more recognition in worldwide jazz, and this is the opinion not only of this reviewer but of many to whom he has spoken who have either performed with them or attended their concerts.