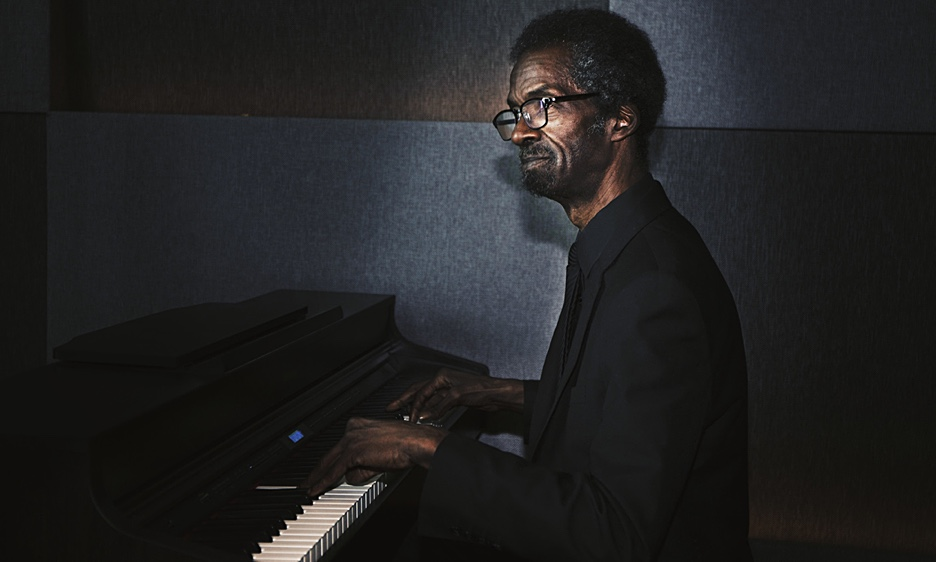 BY DOUG HALL
September 9, 2021
Sign in to view read count
Bobby West, jazz pianist, international performer, and composer, has split his professional career between Los Angeles, California and since 1993, living and performing abroad. He has successfully managed a transition to have residence and perform in Asia, the Middle East and Europe over the last 30 years. He is currently residing in Taiwan and playing in a variety of jazz clubs in the capital of Taipei, including the Blue Note Taipei and Yuppy's Bookstore.

His debut release Leimert Park After Dark (Soulville Sound Recordings, 2021) is a reflection and reminder of the unique 1 square mile of blocks in West L.A. known as Leimert Park, creating an oasis from the gritty, tough urban world surrounding this neighborhood. This African-American cultural epicenter is both a physical location, rooted memory anchor for Bobby West and a force for the arts, performers, teachers, creative expression and social connection, bringing hope to this community. West, in fact, might have been a teacher in the Leimert Park area, but his gift was playing and performing jazz. AAJ caught up with West as he finishes his performance schedule in Taiwan, before returning to Los Angeles.

All About Jazz: As you have performed abroad for nearly 30 years, in Asia, the Middle East and Europe—can you talk about the international jazz audience in Asia?

Bobby West: From 2006 to early 2008 I was performing at the Grand Hyatt in Tokyo. It was a marvelous stay for about two plus years and I just loved Tokyo. And I was just amazed—in my humble opinion the greatest jazz audience in the world are Japanese.... just extraordinary man. The only audience that rivals them is New York City. They are things about Tokyo that absolutely put New York City to shame. Kind of mind blowing, as I worked six days a week. High rollers from all over would come to stay at the Grand Hyatt in Tokyo—Cigar Bar—to really experience it you need to be there a while, to really absorb what's happening—with their society. There's a thing they have there called "jazz mania"—anything they get themselves into, it's like one-hundred and ten percent. There are factions there that are into American soul music, hip-hop— whatever the music—they are fanatical about it. It represents about 0.02 percent of the population. But when they are into it, it's all in. They have hip hop clubs for instance, and you walk into these places and you would think you're in Brooklyn.

When it comes down to jazz, they are so knowledgeable, they are well-read on it, they've studied it, there are second and third generation "jazz maniacs." Even though it only applies to a small fraction of the population, these people are so serious.

AAJ: The Blue Note jazz club in Tokyo is so famous and historical, what recollections do you have of performances and performers?

BW: On my days off, I don't care who came to the Blue Note in Tokyo -Herbie Hancock, Chick Corea, John Scofield, Hubert Laws, Hank Jones, the great Jimmy Cobb, Billy Hart—I didn't care the cost and was making good money at the time—I took it all in while I was there. I was such a frequent patron that they even had this area (for me). So they would say, "Oh—here comes Bobby," and always sit me behind the piano for McCoy Tyner, or Hank Jones or Ahmad Jamal.

Out in the lobby they had a merchandise store and a hoodie sweatshirt read "the Blue Note Tokyo—the Greatest Jazz Club in the World" and I thought, wow—that was a bit pretentious. I then thought about it more, over the time I had there, and it's true. That's not really an exaggeration if you think about it, and people would say, "what do you mean by that statement?" Well, every facet of a jazz club or whatever you thought a jazz club should be—they were that. Everything from the ambience to the amazing sound system—and for instance the selected Steinways and other piano's that each performer preferred—be it McCoy Tyner, Chick Corea or Ahmad Jamal. The state of the art sound, ambience and even the dressing rooms for performers —everything about it is what you would think of as the greatest jazz club in the world, what it would look and sound like.

AAJ: Changing directions in jazz clubs, I know you have performed over ten times at the jazz mainstay in Taipei, The Blue Note Taipei, can you talk about your experience performing jazz there and in Taiwan?

BW: I love Carter and A-zhe (co-owners of The Blue Note Taipei). Have you seen Carter's jazz collection of vinyl records? She has a collection of vinyl unlike anything I've ever seen. And I've known some people around the world with jazz album collections, but Carter's vinyl jazz record collection—you could do a documentary on it.

There is another jazz venue (in Taipei), with a strange name, "Yuppie's Bookstore." The bottom floor was in 2005 the largest record and bookstore I'd ever seen. It's been converted now into a supper club and they have jazz there. I'm thinking it's the number one jazz spot. Wonderful people, and the place is big and vast. I've played over ten times, on weekends, and they were turning people away, with standing room only—which had nothing to do with my performing there—but instead it was the draw. They have wonderful walk-in local clientele that will always fill the place up. If you have a gig at Yuppies and it's not filled—then somethings wrong. Great turn-out on Sunday nights for me. There is Sappho, Alchemy and some other jazz clubs, which are smaller clubs.

AAJ: What has been your experience with the jazz club owners and the audience in Taiwan?

BW: They know the jazz history. They are erudite, and students of jazz history and the essence of it. And unlike our country, when these people are interested in something, they just go all out and realize that it's important to know the history. It's to them, important to know the significance of Thelonious Monk and Duke Ellington. The Taiwanese have absorbed the culture and done their homework and the grandparents have done the homework and passed it on to them and so on. By the time they see me, they may approach me and say, "Oh, you remind me of Sonny Clark" or someone else—but it shows the interest they have. When I'm introduced to them, as an expressive black man that I am—that kind of exudes this music—we have an understanding almost at first sight.

They are not necessarily assertive aggressive people, so a lot of times you don't know what's going-on. The jazz etiquette here is after a sax or piano solo there is silence—and almost immediately I recognized it's a cultural thing. In the US we take it for granted that a solo gets applause right after. But for them, when the song is finished— applaud—however spiritedly.

AAJ: Returning to your debut recording, Leimert Park After Dark, what is the story behind Leimert Park and are these compositions a reflection of a physical location, your neighborhood roots and your experience there?

BW: Billy Higgins never really gave up the family home in Los Angeles, left New York City (after performing and recording extensively under the Blue Note label)—so later in his life, after he slowed down after the Blue Note years (in NYC), he came back to Los Angeles, and poet Kamau Daáood, they co-founded (1989) a performance gallery called the World Stage. And the venue World Stage became the epicenter of Leimert Park. For 30 years now they have been the mecca, when you want real jazz in the area you go to Leimert Park. Besides the World Stage, there other clubs, and very Afro-centric. A lot of people walk around in African garb, there's African markets and other performing arts schools. When you pull up to the main boulevard there, at Leimert Park, you quite literally enter another world. It's a place that we cherish. And I went through a thought process about the title of this release. Do I want to call it after Leimert Park? and I went backwards and forwards with my manager—but glad that I chose it. It's a special place.

You can be on the edge of park, and you hear the sounds of urban blight, sirens screaming—but you turn that corner, and your soul goes "Ahh" and suddenly you're overcome by the smell of exotic incense in the air and you see a crowd of people, from the laid back to the peacocks in exotic dress, and the biggest black bookstore in L.A. is there. You have chess tournaments on the corner, people doing Tai-Chi in the park and somebody blasting his jazz and I could go on and on. You and I could have a much longer conversation about this, in person.

AAJ: What are the connections to Leimert Park in your compositions?

BW: When I'm in Leimert Park, often I will play themes like "Prelude to the Nude" or a "Bolero"-sounding song, which means they (the audience) don't expect it. So, I tried to pay attention and apply that method to this recording, but also paying really close attention that I wasn't trying to be too many things. I wanted to keep a common denominator—one piece being kind of French Impressionist, some blues and a ballad standard and then a modal Miles piece "Get Set." So, I sought to be versatile but didn't want to paint myself too thin.