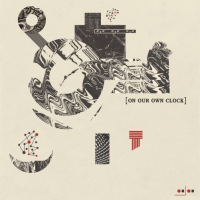 The original plan for the album, back in 2019, was to get the musicians together in London and record groove-based jazz-adjacent music with West and South African accents. Then along came you know what. Rather than abandon the project, it was decided to record the musicians in breakout groups in London, Johannesburg and Dakar and weave their contributions together digitally. The musicians gathered in the three cities in July 2020 to record first ideas, each sending the files to their colleagues in the other two cities for their inputs. A month later, the three groups reassembled and added further content. The results were then edited and mixed in Johannesburg between December 2020 and March 2021. Open ended going on unfinished, the album is funky but lyrical modal-jazz, heavy on the vamps, with occasional wordless vocals contributing to the atmosphere. The elevating vibe is enhanced on two tracks ("Be The Light" and "We Still Building") by motivational raps from South Africa's Grandmaster Cap and Nigeria's Damola Olowade.

A minor criticism: It is overdoing things a bit to devote three of the eleven tracks ("How To Make Art In A Pandemic" Parts 1, 2 & 3) to collages of studio chatter about the recording process. Many other musicians have, after all, been employing precisely the same process over the past eighteen months and many more musicians have been doing it since the advent of digital technology. Indeed, the 84-year old trumpeter Jon Hassell has been doing so with sublime results for decades. In 2021 the process is hardly breaking new ground. Another concern is that On Our Own Clock is only available on vinyl and download. Given musicians' currently reduced income streams: why no CDs?