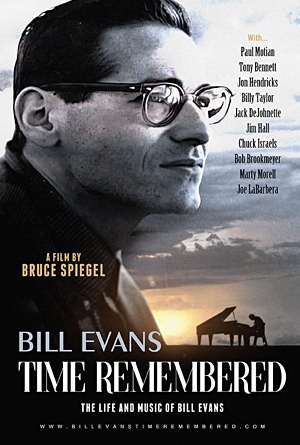 Bill Evans: Time Remembered
The Life And Music of Bill Evans
A Film By Bruce Spiegel
2016

Eight years in the making, Bruce Spiegel's touching documentary on the life and music of the late, great, and mysterious pianist is a must-see for jazz history buffs, as well as for anyone who enjoys cool, impressionistic piano—the style Bill Evans pioneered beginning in the early 1950's and owned and expanded up to his death in 1980 at the age of 51. The categories are broad enough to include scores of listeners. Because isn't it true that, once one hears him—whether leading his brilliant trio with Scott LaFaro and Paul Motian on Sunday At The Village Vanguard, or anchoring the celestial Miles Davis Kind Of Blue sextet—everyone digs Bill Evans?

What was it about the music this man made—or, more appropriately, what is it about the music—that makes it so compelling? Actually, just about everything: harmonic approach; technique and touch; authentic emotional content; strength and sensitivity. The music of Bill Evans still sounds fresh and contemporary and his influence on later generations of jazz pianists is immense and ongoing. Which raises another question: did we need a film to tell us what we already knew?

The answer, based on a recent viewing, is a resounding yes. There's much about Bill Evans that was, and is, a mystery, and the film goes into great detail to explore the facts of Evans's life while maintaining clear focus on the music. Spiegel lays the facts out chronologically, using old photos and stories from family, friends and associates both in and outside the business, as well as extant audio recordings of Evans himself that carries much poignancy throughout the film.

Born in 1929 into a Father Knows Best-type of suburban family in Plainfield, New Jersey, he was exposed to classical music ("all the Russians") and trained to the point where he was a "pretty good sight reader by the age of nine" (his description). He was gigging professionally at the tender age of 13, a driven music student at Southeastern Louisiana University, did a stint in U.S. Army bands, and by the mid-to-late 1950's was working in New York as an ace sideman with the likes of Art Farmer, George Russell, Charles Mingus, and Davis, among others. A prolific composer, Evans carried a pocket-sized music notebook with him at all times to capture ideas for tunes on-the-go—he wrote more than sixty originals, a few of which, such as his first major composition, "Waltz For Debby," and "Blue In Green," written for Kind of Blue, have become jazz standards.

The chronological structure Spiegel uses to frame the facts of Evans's life enables a deep exploration of the genesis and development of the pianist's musical ideas and the technique with which he expressed them. The commentary of former band mates and musical colleagues such as Motian, Jon Hendricks, Jack DeJohnette, Jim Hall, Billy Taylor, Bob Brookmeyer, the editor and lyricist Gene Lees, the producer Orrin Keepnews, Tony Bennett, Chuck Israels, Marty Morell, and others, bear witness to the arrival and full flowering of the Bill Evans we know, and also helps explain the darker side of Evans—touched by tragedy, afflicted by depression, addicted to opiates—the public did not see but could hear in his music. Contemporary jazz pianists, including Bill Charlap and Eric Reed, provide astute analysis of Evans's huge effect on later generations in terms of chordal harmonics and technique.

The portrait of Bill Evans drawn by Spiegel is a classic high-low, dark-light mix of a young man who arrived on the scene during a period of tremendously fertile creativity, populated by a vast array of musical talent, many of whom were plagued by the scourge of addiction; the young man was quickly recognized and soon made his mark—stylistically on his instrument and through powerful written compositions—enough to earn genuine modern jazz immortality while paying a heavy personal price in terms of wellness and relationships, not to mention longevity. By now, unfortunately, this Faustian bargain is familiar, the artist gaining glory at the expense of constant pain and compromise for family and friends, he himself struggling but finally unable to survive the realities inexorably imposed by his tortured all too human nature. Sadly, traces of this struggle remain in Evans's surviving spouse, Nennette, and son, Evan, neither of whom agreed to participate in the making of the film.

Also sad is the passing of the Evans cohorts who so enliven the fill, as Motian, Taylor, Lees, Keepnews, Brookmeyer and Hall are no longer with us.

Happily, we have the music, which endures; after seeing Bill Evans: Time Remembered, this viewer spent the next morning in deep connection with early Evans masterworks, giving special attention to the quiet, Satie-inflected "Peace Piece," wishing nothing less for its author.

One note for readers interested in checking out the film: as of this article being posted, the producers have not been able to find a national or international distributor for it. Going it alone, Bruce Spiegel is working with music schools and jazz clubs around the U.S., the U.K., and Europe to offer free showings in cities with jazz communities—he's even making it available for home screenings. For more information, or to view it online, there is a web site.