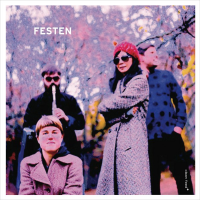 Does the world really need another Scandinavian group from the Clean Feed stable? Well in the case of Festen, the answer is a resounding yes! Further confounding the by now tired Nordic tone stereotype, and even diverging from the outfits influenced by the 1960s avant-garde, this quartet comprising four young Swedes based in Stockholm, propounds a free jazz thoroughly of the moment, forgoing time and tune on a collectively navigated journey.

During the lengthy opening "In The Kitchen," he moves from quavering as if in the grip of unspeakable emotion, to snorting rambunctious bass clarinet by the end. Similarly wide ranging, bassist Elsa Bergman veers from full-toned pizzicato to spidery bowed sibilance in the same cut, while on drums Erik Carlsson rumbles and taps to maintain momentum without recourse to bombast.

It's an egalitarian date in that roles aren't fixed, and placement of sound is governed by close listening rather than any hierarchy. Each track is episodic, subject to sudden change. Spiky exchanges at the outset of "2015 Forever" lead to rampaging piano and skittering clarinet. While Hedtjärn holds a dog whistle sustain, Ullen spins out jazzier lines with a hint of melody. But the most uncompromising moments come on the final "it never gets better than this." where violent crashing piano depth charges contrast with stratospheric clarinet. It's a good way to end an unpredictable but exhilarating session.

In The Kitchen; 2015 Forever; "det blir aldrig bättre än så här"; "it never gets better than this".