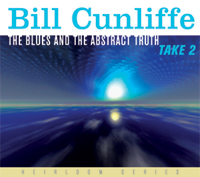 The Blues and the Abstract Truth, Take 2

Oliver Nelson (1932-1975) was a saxophonist, arranger, and composer who seemed everywhere in the 1960s. In popular culture, Nelson is best remembered for his television scoring for shows including Ironside, Night Gallery, Columbo, The Six Million Dollar Man, The Bionic Woman and Longstreet. In jazz culture, Nelson is remembered for his masterpiece The Blues And The Abstract Truth (Impulse!, 1961).

The Blues And The Abstract Truth boasted a superstars-in-the-1960s lineup that included pianist Bill Evans, bassist Paul Chambers, trumpeter Freddie Hubbard, reeds player Eric Dolphy and drummer Roy Haynes. The theme of the date was an investigation of the blues, with most of the tunes extending beyond the standard 12-bar format. Nelson, with Evans and Chambers from trumpeter Miles Davis' Kind of Blue (Columbia, 1959), extended the idea of modal freedom in composition and performance. This is truly a desert island disc.

Almost 50 years since its original release, The Blues And The Abstract Truth provides pianist/arranger Bill Cunliffe an excellent vehicle for a 21st century consideration. The Blues And The Abstract Truth, Take 2 is that reconsideration. Cunliffe divides his time between New York and Los Angeles. He trained at Duke University under May Lou Williams and took his masters degree from the Eastman School of Music. He is a noted big band arranger who was won Down Beat Awards for his big band and orchestral work.

Cunliffe creatively uses his dense arsenal of arranging talents on this project. Oliver Nelson composed with a beautifully organic sophistication, Blues... being his most evolved example. Cunliffe, rather than simply replicating a masterpiece, chooses to to project this musical light through a different prism, one that is equally foward-looking and traditional.

Cunliffe retains Nelson's original song order and adds two of his own original compositions to round out the recording. (The original was 36:35 minutes with Cunliffe's clocking in at 41:00). Cunliffe's compositions, "Port Authority" and "Mary Lou's Blues," are very much in keeping with the texture of the original Blues... but extrapolate Cunliffe's future-of-jazz view. "Port Authority" has a craggy bop head that leads into a solo section in the same way the arrangements of Nelson's songs do. First Cunliffe flies through a chorus or two and then Jeff Clayton and Bob Sheppard turn in nifty alto and soprano saxophone solos respectively, followed by one from bassist Tom Warrington.

"Mary Lou's Blues" is Cunliffe's lofty homage to his teacher Mary Lou Williams, capturing both the plush orchestration in the spirit of Oliver Nelson while retaining the graceful sway of Williams. Cunliffe's solo is understated, backed only by walking bass and drums. Andy Martin turns in his perhaps his most integrated trombone solo on the disc. While superb, these are not the tunes the listener has come for. Give us "Stolen Moments," "Hoe Down" and "Yearnin.'"

Cunliffe reorchestrates Nelson's charts broadly in two ways: one, he changes the harmonic voicings of sections, giving them an almost off-kilter quality reminiscent of pianist/composer Thelonious Monk, and second, he substitutes different lead instruments in several sections. Using "Stolen Moments" as an example, Cunliffe modifies the harmony just enough to be uncomfortable and then adds rests in unexpected places. The overall effect is an elongation of the melody line and breaks. He and his band navigate the song's well known head twice before a languid solo groove is established for Andy Martin's smartly round trombone tone, Jeff Clayton's sharp alto and Tom Warrington's sleepy bass.

Cunliffe's takes on "Hoe Down" and "Yearnin'" are a bit more dramatic. He introduces some off-time confusion into the head of "Hoe Down," breaking up Nelson's rock-solid Aaron Copland rodeo swing bringing the horns to dissonant ends and shoring up his melody lines. Trumpeter Terell Stafford provides a brisk yet satisfying solo that builds on its humble genesis before giving way to Cunliffe's sprite recital.

The great "Yearnin'" is drastically changed from the original. Where Nelson infused a southern gospel cry into his piece, Cunliffe uses a unitarian deconstruction to add edges to the familiar climax, propelled here by Jeff Clayton's reedy alto saxophone, playing it only once in the performance. Where the jaunty head is jarring, the solo sections smooth out providing a soft cushion for the players. Stafford affords a fine building trumpet solo that absolutely burns hotter than even his solo in "Hoe Down."

As a concept disc, Bill Cunliffe's The Blues And The Abstract Truth, Take 2 ranks with the likes of Karrin Allyson's Ballads: Remembering John Coltrane (Concord, 2001) in invention and vision. Cunliffe assembles a crack outfit, somewhere between little and big band, and proceeds to record the finest disc released this year.