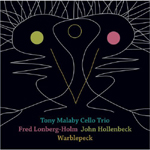 Drawing inspiration from art forms unrelated to jazz, Malaby's interest in Stan Brakhage's abstract films, Cy Twombly's expressionistic paintings and the silent films of Buster Keaton influences his narrative phrasing and thematic concept on this audaciously experimental record. Sidestepping the typical pitfalls of the saxophone tradition, he elicits a variety of cadences on his horns. His gruff tenor veers from pointillist accents ("Anemonie") to vociferous grunts ("Warblepeck") while his sinuous soprano pivots between lyrical glissandos ("Scribble Boy") and fervent chromaticism ("Remolino").

Hollenbeck's creative virtuosity has yielded partnerships with artists as diverse as composer Meredith Monk and pianist Satoko Fujii. From effervescent xylophone cadences and scintillating glockenspiel accents to pulverizing trap set salvos, he unveils an endlessly fascinating array of sound. His tuneful abilities materialize on a haunting cover of Bill Frisell's "Waiting Inside," as his bittersweet melodica strains intermesh with sonorous cello and understated tenor.

A stalwart member of the Chicago scene, Longberg-Holm has his first meeting here with Malaby and Hollenbeck. A classically trained cellist with a supple acoustic technique and a predilection for electronic EFX, he conjures surging feedback, oscillating loops and distorted power chords from his amplified instrument. His overdriven double stops on "Two Shadows" and "Sky Church" summon metallic sheets of sound, goading Malaby's ferocious tenor and Hollenbeck's pneumatic drum kit into a frenzy. Conversely, his insectoid blips and bleeps on "Jackhat 1" and "Jackhat 2" intertwine with Hollenbeck's shimmering accents and the leader's multiphonic fragments, weaving a spectral panorama.

Malaby's desire to break free from the "athletic, picture-perfect" view of contemporary jazz finds accord in this unbridled setting. Embracing the process, rather than the finished product, Malaby's Cello Trio integrates their improvisational working method into their core aesthetic, finding beauty in the mystery of spontaneous creation.

A playful excursion into the possibilities of sound influenced by the visual arts, Warblepeck is a fascinating electro-acoustic effort and Malaby's most personal and adventurous recording to date.