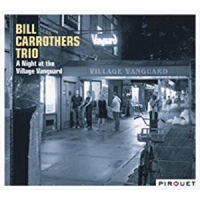 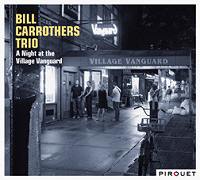 Maybe everything that goes down in New York's Village Vanguard should be documented. The history of live albums recorded at the legendary venue, going back to the early days, includes standout sets by pianist Bill Evans and saxophonists Sonny Rollins, Dexter Gordon and John Coltrane. An update into the new century finds the likes of pianists Brad Mehldau, Fred Hersch and Jason Moran, saxophonist Joe Lovano and drummer Paul Motian coming off Vanguard gigs with some of their finest live recordings.

The pianist has proven his "major talent" mettle on CDs like I Love Paris (Pirouet Records, 2005) and Joy Spring (Pirouet Records, 2010), his nod to bebop icon, trumpeter Clifford Brown. But he has remained somewhat of a lesser known entity, in part perhaps due to his retreat, in 1993, from New York City to Michigan's upper peninsula, to lead a more rural and saner life. A return to the big city in July of 2009 for a week-long engagement at the hallowed nightspot resulted in A Night at the Village Vanguard, Carrothers' and Pirouet Records' first live recording.

Rather than cherry pick different tunes from different performances, Carrothers has gone with one night's music in its entirety, two sets, two CDs, 140 minutes of the pianist accompanied by his European trio, bassist Nicolas Thys and drummer Dre Pallemaerts. It was a night the trio was in top form.

The first set opens with "Tiny Capers," from the Clifford Brown songbook. The trio turns the tune into a joyous tumble of sparkling sound, a freewheeling careen of bright notes and off-kilter rhythms, before they move into a marriage of Brown's "Joy Spring" and Victor Young's "Delilah," where an initially patient and solemn mood evolves into exotic and ominous territory.

Carrothers' superb Armistice 1918 (Sketch Music, 2004) showcased his interest in historical tunes from the World War I era. He revisits that time frame on Jimmy Dorsey's "This Is Worth Fighting For," painting, with a slow, eerie precision, a dark and foreboding picture punctuated by glimmers of hope that blink out with a roiling, ravages-of-war cascade ending.

The title tune to Carrothers' Home Row (Pirouet, 2008), an original composition, features an implacable up-tempo momentum and the pianist's two-fisted intensity, his fingers flirting with chaos inside a steady bass/drums groove. "News From Home," another Carrothers-penned tune, opens with a melancholy tinge that brightens slightly as it unfolds, and "Let's Get Lost" has a wistful mood in the beginning, then shifts into brighter and more hopeful feeling full of fragile, delicate, captivating beauty.

CD1's First Set ends with "Those Were the Days," familiar to most as the theme song to television's All in the Family. It's an easy-rolling, relaxed rendition, spacious and pensive, with an intermittent ebullience, closing out the first half with style and grace.

Carrothers goes again back to Clifford Brown to open the Second Set. "Junior's Arrival" is a fun romp, tilted a bit off-balance by the trio. Carrothers said of music, in his 2010 interview with All About Jazz: "It's supposed to be fun. You're supposed to play and go on about your day." It sounds as if he's in that mode in the more up-tempo tunes on the disc, but with Carrothers there's a sense of deeper meaning, especially on the slower songs, where an uncommonly deep exploration seems to happen, as it does on the Second Set's second tune, "Time," by Richie Powell (Clifford Brown's pianist, and Bud Powell's younger brother, who died in the 1956 car crash with Brown). There is a hymn-like gravity to this, as well as to the previously-mentioned "This Is Worth Fighting For" and "News From Home."

Then, halfway through the Second Set, there's "Peg," the most gorgeous of Carrothers' compositions. This isn't fun that can be soon forgotten to get on with the day; this is a serious prayer of praise, devotion and wonder, with a mysterious twilight mood similar to that of Thelonious Monk's "Crepuscule with Nellie," a sound so different in mood and tone from the up-tempo good time tunes like "Junior's Arrival" and "Tiny Capers," and so unmistakeably original. And it is the shift back and forth from the rollicking good time tunes like "Junior's Arrival" to the beautiful depths of "Peg" to the light-hearted prettiness of the next offering, the Gordon Jenkins-penned "Blue Evening," in conjunction with the pianist's unfailingly original approach, that makes A Night at the Village such a complex, enchanting and strikingly lovely success.

CD1/First Set: Tiny Capers; Joy Spring/Delilah; Gerkin for Perkin; Gertrude's Bounce; Jordu; This Is Worth Fighting For; Home Row; News From Home; Let's Get Lost; those Were The Days. CD2/Second Set: Junior's Arrival; Time; Jordan Is A Hard Road To Travel; Peg; Blue Evening; Discombopulated; Snowbound; Days Of Wine And Roses; Our House.