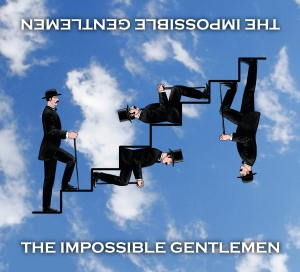 You may not have heard of The Impossible Gentlemen, for this is the group's first album, and you may not have heard of one of its two chief protagonists, as he has chosen to spend most of his career away from the metropolitan center of things. So here's a map reference, crude and approximate, but one that gets close to the buried treasure. Imagine guitarist Pat Metheny's trio masterpiece, Day Trip (Nonesuch, 2007), add a pianist of commensurate genius, and you are banging on the disc's front door. It is that good.

The Impossible Gentlemen is an Anglo-American quartet which got together in 2009. From Britain, pianist Gwilym Simcock and guitarist Mike Walker, who conceived it, and from the US, bassist Steve Swallow and drummer Adam Nussbaum. Its London launch at Ronnie Scott's Club in May, 2010, was generally agreed to have been one of the year's landmark events. The debut album lives up to the considerable expectations which have preceded it, and may seal the arrival of a major new guitar star—"new," that is, after three decades at the coalface. About this, more in a moment.

It is, of course, at least borderline offensive to liken four musical characters as strong as Walker, Simcock, Swallow and Nussbaum to anyone else, and, in any case, the comparison needs to be thrown away as soon as the map reference is suggested. For although The Impossible Gentlemen is, like Day Trip, a gutsy, gloriously lyrical, guitar-led romp in the acoustic jazz tradition, ranging from the filigreed to the full-tilt, and with a twist of fusion thrown in, it has a personality all its own.

While the first musician to be listed in the credits is Simcock, much of that personality comes from Walker, the least internationally celebrated member of the lineup. Like Simcock, Walker, almost 20 years his senior, is from Manchester, in the north of England. Unlike Simcock, he's never left the area, which partly explains his relative obscurity, for England's music business is still overwhelmingly London-centric. Born in 1962, Walker came to local attention with the fusion band River People. Asked to deputize for John Scofield in trombonist/pianist Michael Gibbs' band, he was heard by trumpeter Kenny Wheeler, who recruited him to his big band. In the early 1990s, he toured the UK extensively with saxophonist Tommy Smith, and has since performed or recorded with a mini-galaxy of stars, including pianist John Taylor, bassist Dave Holland, bassist Arild Andersen, trumpeter Palle Mikkelborg, saxophonist Tim Berne and keyboardist George Russell. Walker toured the US and much of Europe with Russell, but he's yet to make a headline splash in his own right, either with his own or a cooperatively-led band.

The Impossible Gentlemen should help change that. Not only does Walker share at least half the soloing space with Simcock—occasionally playing acoustic guitar, he mostly goes electric—he also wrote four of the eight pieces (to Simcock's three). His writing displays a penchant for odd time signatures and idiosyncratic structures, platforms for streams of exquisite melodicism, sometimes easygoing, sometimes urgent, always fast-flowing. Walker's lyrical gift is certainly the equal of Metheny's, but his style has rougher, tougher edges, heard throughout the album and most lengthily on the closing blues, Nussbaum's "Sure Would Baby."

None of this is intended to belittle Simcock's contribution, or those of Swallow (at 70 years the don of the group) and Nussbaum. All three shine—Simcock with lyricism, Swallow and Nussbaum with rhythmatism—but they need less of an introduction in these pages. Unexpectedly, Swallow, a regular partner of Nussbaum's since the early 1980s, takes no writing credits.

In the iPod age, album cover semiology is in danger of becoming a lost pleasure. But the group photos in the booklet speak clearly: here is a band which is having an absolute ball. As you almost certainly will too, if, after finding the approximate map reference given above to be potentially attractive, you hear The Impossible Gentlemen.

Tracks: Laugh Lines; Clockmaker; When You Hold Her; You Won't Be Around To See It; Wallenda's Last Stand; Gwil's Song; Play The Game; Sure Would Baby.