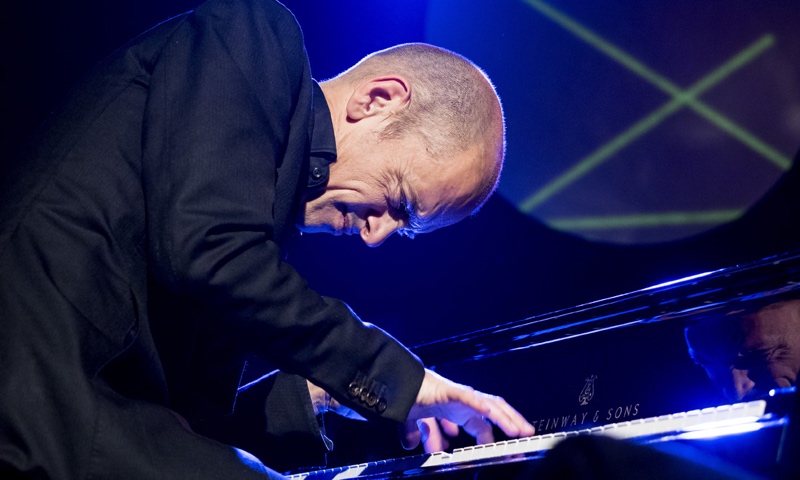 By THOMAS CONRAD
November 11, 2016
Sign in to view read count

Belgrade’s bookings reflect an awareness of the players now operating on the leading edge of the jazz art form, famous or not, from the United States and elsewhere.

Because of the wars in the former Yugoslavia, the Belgrade Jazz Festival, like most good things in the Balkans, went dark for 15 years after 1990. When it started up again in 2005, it was small. By 2008, it was big enough to book names like The Bad Plus, Christian Scott aTunde Adjuah and Patricia Barber. But even then, from the vantage point of the world jazz community, Belgrade was off the grid. Serbia, after all, had been bombed by NATO for 76 days in 1999. In the early years of the reorganized Belgrade festival, most jazz fans outside the Balkans had never heard of it, and would have been surprised to learn of its existence.

All that has changed. Belgrade is now regarded as one of the influential jazz events on the annual European circuit. It has probably replaced Skopje, in Macedonia, as the most important jazz festival in eastern Europe. The first reason is programming. The second reason is the vibe.

As for programming, Belgrade's bookings reflect an awareness of the players now operating on the leading edge of the jazz art form, famous or not, from the United States and elsewhere. Unlike so many jazz festivals these days, Belgrade does not offer any rock or pop. There is some world music (such as the Spanish harmonica player Antonio Serrano this year), but it always contains genuine jazz content. Every act in the program has a reason to be there. There are always a few local bands, and they are the best in town. The bookings are in the hands of board member Vojislav Pantić and program manager Dragan Ambrozić.

As for the vibe, the festival reflects the particular severe energy of its gritty, graffiti-covered city. Serbia is one of the poorest countries in Europe, still struggling to emerge from the deprivation brought on by years of war, repression and isolation. Perhaps because so much of their recent history is tragic, the Serbian jazz audience seizes the music like a lifeline. Over the years, concerts have been held in many different venues around town. Now they are almost all concentrated in Dom Omladine, in the old center, just off Trg Republike (Republic Square). It was a communist youth center in the Tito years. It contains two spaces for music, the refurbished 560-seat auditorium, Velika Sala, and Sala Amerikana, a smaller, funkier cave upstairs where the late night shows go down.

There are jazz festivals that spread themselves over many days and many different sites across a city or even region. They are more like concert series than festivals. But in Belgrade, Dom Omladine became the festival's nerve center and throbbing heart. For five nights, before and after concerts and during intermissions, its overflowing foyer was a world-class hang. In keeping with current trends, Belgrade's hardcore jazz following is middle-aged and older. But this festival also attracts a younger crowd. Some are jazz fans, some are there for the party. (Ticket prices are unusually low and virtually every single performance was well attended.) Overall, the festival vibe is intense and communal. Musicians feel it. More often than not, they spill their guts when they play Belgrade.

For visitors from other countries, there are huge attractions and one major drawback to Serbia. The attractions include the austere, hard-edged beauty of Belgrade, the welcoming people (more reserved than, say, Italy, but sincerely interested to meet you), and the affordability of almost everything (especially the excellent food and, if you're into it, rakija). The drawback is the cigarette smoke, even in nice restaurants. Serbia is not a member of the European Union, which requires a ban on smoking in public places. Cigarettes are the national pestilence of Serbia.

The only concerts outside Dom Omladine were in the cavernous 3000-seat Sava Centar, across the Sava River in Novi Beograd (New Belgrade). For the first time since 1989, the festival featured two nights at Sava Centar. The trio of Jack DeJohnette / Ravi Coltrane / Matthew Garrison, Dave Holland's new quartet Aziza and the Avishai Cohen Trio all played there. It is natural to assume that a given edition of a jazz festival is defined by its headliners. It is natural but untrue. None of the great moments of Belgrade 2016 came from Sava Centar. The headliners were OK but not extraordinary, and all had issues.

Cohen's trio is about showmanship, energy and technical expertise, not art. That said, most jazz acts could use a little more showmanship, and Cohen nearly filled the 2500-seat main floor of Sava Centar. Cohen's Serbian fans love him and know his songs. He is one of the fastest bass players alive, and he finds talented young musicians for his bands and jump-starts their careers. He is now touring with two gifted young players from Israel, pianist Omri Mor and percussionist Itamar Doari. (If you weren't looking, you could easily have assumed that there were two drummers on stage named Itamar and Doari. He is a percussion machine.) Cohen's primary contribution to jazz may be his ability to draw in a younger audience, some of whom will stay.

The DeJohnette trio has bloodlines like no other. Two of its members are the sons of icons (John Coltrane and Jimmy Garrison) who played in what many critics believe was the greatest jazz ensemble of all time, the John Coltrane Classic Quartet. (The third, older member, DeJohnette, collaborated with John Coltrane back in the day.) But this trio is better on record (where they must be relatively concise and focused) than in person (where their sets tend to start fitfully while they take too long to search for an opening). Their only album to date, In Movement (ECM, 2016), is mostly high level creative music. But in Sava Centar they often sounded like three people related by physical adjacency on a stage rather than by a shared direction. The last third of their night was stronger. Fortunately, DeJohnette's use of acoustic piano and electronic effects was minimal (unlike in some of their concerts), and he eventually showed why, at 74, he is one of the great drummers, capable of generating huge, looming fields of diverse energy. At the end, they even played an actual, coherent, pretty song, Dave Holland's "Just a Whisper," with Coltrane softly keening on soprano saxophone.

Aziza, the other band on the bill, was the opposite of the DeJohnette trio in one regard: Their live show is better than their self-titled album (Dare2, 2016). The quartet has Chris Potter, Eric Harland and Lionel Loueke, and the album is limited by the dominance of Loueke's guitar. His African rhythms and gaudy colors are like spices so strong they overwhelm all the other flavors in the meal. Loueke also tends to simplify the music, turning a Holland project into a high-class boogie band. But in Sava Centar he did take one long, varied, burning blues-based solo that showed why he got so much attention when he first arrived on the scene from Benin 15 years ago. In person, Aziza rocks the house. They hint at what jazz-rock fusion might have been, in the hands of world-class players. It is notable that Harland, who deals in firestorms, also forms his detonations into elegant designs. Chris Potter has endless intelligent ideas and one of the cleanest, most clarion tenor saxophone sounds in existence.

Sava Centar's capacity was necessary for these headliners, but it is a little cold. At this festival the heat came from Dom Omladine. One of the purposes of attending a jazz festival is to make discoveries. For much of the Belgrade crowd, Rob Mazurek was probably a new name, even though he is a respected figure in the world's small, dedicated avant-garde jazz community. His set with his trio Sao Paulo Underground was wildly exciting and defiantly irrational. Music was flung and spattered all over Sala Amerikana. There were jolting daredevil leaps from trumpet (shattering announcements) to piano interludes (quiet and cryptic) to vocals (wordless and shrieking) to various rattles (shaken like laundry) to a wood flute (WTF?), everything sometimes distorted and/or made gigantic by electronics. And that only accounts for what Mazurek was doing. There was also a drummer, Mauricio Takara, and a synthesizer maniac, Guilherme Granado. It was a rush when, from the seething tumult, beauty suddenly emerged, in splinters and shards. There was a touching moment at the end when Mazurek shared that his father had passed away three days before, and said that the concert was a celebration of his father's life. (Backstage, Mazurek said that he had first intended to break off his tour and go home when he learned of his father's death, then realized that his father would have wanted him to go on.)

Another discovery was the Orquestra Jazz de Matosinhos, from Portugal. They brought a refreshing, mellow, rich orchestral sound to the festival. Their graceful program was almost entirely composed by the pianist, João Paulo Esteves da Silva. The best tune was a rapt, brooding ballad, "Cancão Acoreana." The section work was stronger than the soloists in this band, but the ballad contained striking moments from tenor saxophonist Mario Santos. His jagged lines contrasted beautifully with the smooth textures of the full ensemble around him.

Two Serbian bands were first rate. The eight-piece ensemble of viola player Szilard Mezei performed the leader's asymmetrical, mostly dark, always mysterious compositions. They drew upon European classical and Balkan folk sources but were indisputably jazz. Violins are more significant in the music than ever. Mezei's meticulous octet was turned edgy by the stark strains of a viola, out front. Everybody in the Schime Trio + One is a badass: alto saxophonist Luka Ignjatović, pianist Sava Miletić, bassist Boris Sainović and drummer Predrag Milutinović. Ignjatović has a pure, singing alto sound and the kind of chops that would play well in New York. Yet the bombastic free thinker Miletić almost stole the show.

Here are the five concerts at Belgrade 2016 that will be remembered the longest: