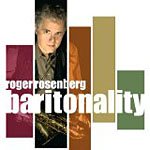 Even in the day when the sound of baritone voices like Ernie Cacares, Harry Carney Charlie Fowlkes and Joe Temperley streaked across the sonic stratosphere, solos were graceful, granular and short. It was only when Cecil Payne Gerry Mulligan, Pepper Adams and a handful of other players up until Hamiet Bluiett, John Surman and Howard Johnson began to growl and bellow loudly that significant soloing on the baritone horn came to be featured at length. Bluiett also developed a significant catalogue with the World Saxophone Quartet and on his own. It is high time that Roger Rosenberg is added to this list.

Although he has graced several musical projects for Steely Dan, Rosenberg's name may not be as well-known as it should be. Now, with Baritonality, he has made a generous contribution to the musical literature of the baritone. The record seems to say that Roger Rosenberg has arrived, with pomp and circumstance. His tone is commanding, but there are times when he can bring a huge velvet breath to the tone of his phrases and lines. This is almost like what Ben Webster did with his big voice, marked with warm gushes of breath at the end of his musical lines.

There is the other matter of the challenging gravity and linearity of the baritone saxophone. Still, Rosenberg often employs rapid glissandos and an ever-so-gentle vibrato, as he dances and sings his way through the records' striking repertoire. His waltz, "Three for B," and "Someone to Watch over Me"—a wonderful solo baritone excursion—both feature some of his most memorable playing on this deeply masculine horn. On "43rd St. Mama," Rosenberg shifts the focus of his breath slightly, so as to play in short, snorting lines, exploring the very bottom register of the baritone. This is an oblique tribute to the bluesy preaching of Ornette Coleman—in a vastly different frequency range, but very effective.

Rosenberg puts down his Big Brass only briefly. On one occasion—the elegiac "Mike, in remembrance of the late Michael Brecker—he exchanges the baritone for the bass clarinet, while on "Paradox," he takes up the soprano saxophone for an elastic journey. Back on baritone, Rosenberg blows his way with beauty and sensitivity through "Spring Can Really Hang You Up The Most." Guitarist Peter Bernstein replaces drummer Jeff Brillinger and is omnipresent throughout this track, soloing with harmonic ingenuity and grace—a master stroke on the part of producer, Steely Dan's Walter Becker.

So also is the inclusion of George Gershwin and Ira Gershwin's "Someone To Watch Over Me," a tender solo plea from the gravity of the baritone. And "Birds and Tranes" is absolutely breathtaking; an apt closing and showcase for Rosenberg, together with pianist Mark Soskin and bassist Chip Jackson.

Baritonility; Three for B; 43rd St. Mama; Mike; Paradox; Spring Can Really Hang You Up The Most; The 8th Day; Someone To Watch Over Me; Birds and Trees.