Home » Jazz Articles » As Serious As Your Life: Black Music And The Free Jazz Revolution ...

As Serious As Your Life: Black Music And The Free Jazz Revolution 1957-1977 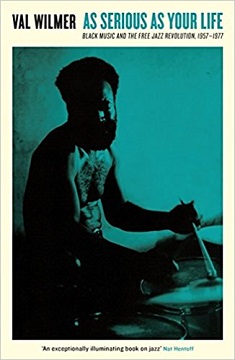 First published in 1977, journalist, author and black music historian Val Wilmer's As Serious As Your Life... makes a welcome print return at a time when jazz excites perhaps greater and more meaningful historical debate than ever before.

The title—the subtitle is a new addition—is from a quotation by McCoy Tyner and one that neatly alludes to the cultural chasm that existed between the multi-layered aspirations behind the variously-called new music, Black music, avant-garde or free jazz that began with Ornette Coleman and the general indifference and outright negativity shown to this musical revolution by the media, the recording industry and the mainstream jazz promoters/venues/ public in America.

The clutter of nomenclature surrounding the new music appears to have been, as with so much else, the invention of the media, but the musicians themselves identify in the main with the term 'new music' or 'black music.' Significantly, practically all reject the term 'jazz,' as the associations and limitations of the word in their eyes had nothing to do with the musical revolution they were embarking on. Incidentally, Radhika Phillip's collection of interviews with twenty six of New York's leading contemporary innovators, Being Here: Conversations On Creating Music (Radio.org, 2013) revealed the same uniform discomfort with the term 'jazz musician' four decades on.

Wilmer's voice is eloquently opinionated throughout. She interviewed practically every notable Afro-American musician during her career, although she readily acknowledges material sourced from interviews conducted by other journalists originally published in Down Beat, Black Music, Village Voice, Melody Maker etc. As the author herself states, one of the chief virtues of the new music—and of African-American music in general—was its refusal to conform to pre-conceived rules, particularly those of the European model. This desire to assert a separate musical identity—and thereby escape the exploitation inherent in the prevailing music industry—by pushing the limits of creativity to the maximum degree and by embracing African-influenced rhythms , is the leitmotif that threads its way through these pages.

The driving force of musicians such as Coleman, Sun Ra, Cecil Taylor, John Coltrane, Albert Ayler, Milford Graves and Sunny Murray—amongst many others—was their dissatisfaction with the formulaic patterns of mainstream jazz, which Anthony Braxton describes as being "not so much about creativity any more as it's about fulfilling other people's ideas about form." The musicians who created the new music revolution forged distinctive yet not unrelated musical paths that were controversial, the author intimates, because they threatened the musical status quo.

Extreme and incomprehensible to many, the fearless new music frequently provoked ridicule and rejection. The Sun Ra Arkestra, for example, was once kicked out of Canada as its music was considered to be "disturbing public order." Wilmer describes how some saw the new music as "the last refuge of the untalented" though as the musicians themselves repeatedly emphasize, the music's ability to provoke physical, sensual and emotional responses far outweighed any considerations of technique or slavishly following established norms. The backlash from some jazz musicians and critics alike, however, was severe, though as Wilmer pointedly states, "The so-called New Music has been treated irresponsibly by many critics, something that could not, I suggest, have gone on for so long had the music in question been created by whites."

Wilmer refutes the notion that free-jazz was played by blacks to an exclusively white, intellectual audience, though just who the audiences were during this twenty-year period is not clearly depicted. There are examples of Milford Graves and LeRoi Jones taking the music onto the streets of Harlem, and references to gigs in lofts but one comes away with the impression, rightly or wrongly, that free-jazz reached only small numbers of the black community. What is clearer is that gigs were hard to come by, with venues dismissive of what they saw as uncommercial music.

The music, of course, was fundamentally about freedom. While Wilmer acknowledges that politics and economics cannot be separated from the music her narrative is not as vehemently Marxist as the analysis of free-jazz adopted by French jazz critics Philipe Carles and Jean-Louis Comoli, whose Free Jazz Black Power (1971)—published in English for the first time by University Press of Mississippi in 2015—viewed all jazz and all criticism through a political and economic prism. The free-jazz musicians were warmly received in a France still reeling from the May 1968 riots/demonstrations and were able to record extensively on the progressive BYG Actuel label. For some in France, the American free-jazz musicians were often idealized as rebellious ghetto heroes casting off the chains of slavery but not all the musicians identified with this role. Alto saxophonist Noah Howard tells Wilmer: ..."I don't stand up on stage, put my saxophone in my mouth and think about bullets and destroying the government."

Not all free-jazz practitioners rejected white, Western norms by adopting Muslim names or traditional African dress, while the political framework of significant collectives/initiatives such as the Jazz Composers Guild and the Association for the Advancement of Creative Musicians that militated for better working conditions and/or control over every aspect of the music did not appeal to all musicians, used as they were to "surviving at near-subsistence level" and fending as best they could for themselves. Archie Shepp, the author illustrates, attracted the ire of the other Jazz Composers Guild members by secretly negotiating a recording contract with Impulse! Wilmer is more sympathetic towards Shepp, recognizing the financial burden weighing on a father with three children to raise.

Perhaps the theme that crops up most frequently in Wilmer's book is that of the dramatic evolution of rhythm in free-jazz and the musical freedoms that it brought in its wake, encapsulated in Braxton's comment: "Tempo is a limited use of time. I think of time as all time." The chapter dedicated to the principal drummers in the free-jazz revolution, Andrew Cyrille, Ed Blackwell, Rashied Ali, Sunny Murray, Milford Graves, and the increasing feel for African rhythms in the music is particularly illuminating. "Whereas at one time the drum was forbidden," the author writes, "now it is dominant in every musical undertaking. The wheel has gone full circle."

Fascinating too, the chapter that looks at the roles of women as wives and partners whose support and sacrifices enabled the male musicians to dedicate themselves fully to their musical pursuits. The myth of Black sexuality and the objectification of black musicians, the relationship between black men and white women and the sexual mores of the time are also explored. Wilmer also sheds some light on the patronising, misogynistic attitudes that female musicians have battled against, summed up in her paraphrasing of Su Ra's alleged comment that, just as the seamen's legend of yore maintained that taking a woman on a voyage would sink the ship, so too Carla Bley's presence in the Jazz Composers Guild would spell bad luck.

Wilmer covers a lot of ground in a revealing study that serves as a very good starting point for anyone keen to learn more about the free-jazz revolution and the contexts in which it existed. The author succeeds in making sense of a music widely derided at the time as senseless, and, importantly, humanizes its protagonists. Highly recommended.