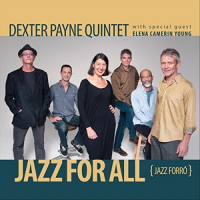 Dexter Payne plays clarinet with an easy, warm and conversational style. It never sounds like he's pushing or stretching toward the next note, but more like he kind of just lets the next note flow out from this one. On Jazz For All, Payne and his quintet flow through Brazilian choro from a unique, multi-cultured and multicolored perspective: As a mainstay for Thinking Plague and Hamster Theater, accordion player Dave Willey boasts impressive avant-experimental credentials; pianist Victor Mestas Perez has performed with bands renowned throughout Latin America, while guitarist Bill Kopper is famous for his dexterity with American and Brazilian jazz and blues; and drummer Raoul Rossiter has accompanied acts from Bahian singer Renni Flores to Fred Wesley, trombonist in James Brown's most famous band (and is also a certified Pilates instructor!).

Funded in part by a Pathways to Jazz grant from the Boulder County (CO) Arts Alliance, Jazz for All renders choro and other Brazilian music through jazz arrangements and its improvisational instrumental approach. Payne first swam in Brazil's warm, tropical musical waters led by the hand of composer Guadencio Thiago de Mello, with whom Payne collaborated across two continents, four albums, and fifteen years.

"Most of these great Brazilian compositions came to my attention in 2014, a seminal year for me in music and much more, fomenting changes that are still unfolding," Payne writes in his set notes. It's so fitting that the first sound you hear is Payne's unaccompanied clarinet as it ushers in the opening "Vestido Longo," selected as the theme song for Brazil's Festival Choro Jazz 2014, which brims with acoustic guitar and piano solos as strong and rich as fine Brazilian coffee.

"Coisa No 10" bounces more than glides, as the ensemble plays the chords so tightly in unison that they jump out of the mix and the soloists pour into your ear like sparkling, clear spring water. "Coração Latino" revisits a thrillride that Payne first recorded in 1997 for his release Inspiration (Dexofon, 2004). This serpentine melody sounds almost Arabic, as exotic and playful as a Disney Alladin character, with the accordion chirping in vocal-sounding harmonies that sound like an itchy scratch lifted from a BossaCucaNova record. If you could take a musical antidepressant, "Coração Latino" would be your best prescription!

"I see clearly now, my musical passion is a language for reaching across cultural boundaries. Beginning as a young white boy, thirsty for the blues, Miles and Basie I heard on the radio, later traveling in America Latina and Brazil," Payne explains. "Now I'm taking baby steps to understand my wife's Asian culture. So many beautiful moments of open-hearted sharing among musicians, brilliant unknown stars from every genre, and every country where I've played —17 so far, and counting! And since I cracked the shell, I've tasted so many more cultures right here at home, and met so many stars—Blues, African, Brazilian, Latin, Greek, Balkan, Turkish, Arabic, Moroccan. It's not about exotic tourism or distance. Abbey Lincoln said it: 'Music is the magic.'"