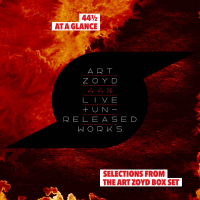 Because France's Art Zoyd was a member of the Rock In Opposition (RIO) movement—a loose confederation of bands making left of center music and subverting the conventions of the music business—they are often characterized as a progressive rock band. But after a brief early period with a standard rock configuration, their instrumentation and musical style came to have more in common with classical New Music: a mix of horns, strings and percussion with the sound of a chamber orchestra.

The massive 14 disc boxed set 44 1/2 : Live and Unreleased Works would be a lot to take in for any but the most committed fan. Art Zoyd's leader Gérard Hourbette chose the tracks for this 80-minute long nine-track compilation, a terrific introduction for anyone new to the group. All but one of the selections are live, dating from 1975 to 2002. But the track sequence is far more creative than a strict chronological one: these disparate selections from different years work together like a suite that was always intended to be heard in this order.

"L'âne de Buridan" opens the set with the sound of nervous percussion, which coalesces into a kind of military march (and a lovely unaccompanied female vocal). "Tone Reverse" follows it with the full chamber orchestra effect of strings, brass and percussion. The larger scale pieces make the compositional structures more obvious. "Cryogenèse Rêve Artificiel" includes a dramatic silence, followed by a complete shift in mood. "A Drum A Drum" is a multi-sectional composition which includes vocal chant (a recurring sound in what is primarily instrumental music). "Noces Accidentelles" finds the group playing with the Orchestre National De Mexico. It opens and closes with a recording of a train, features an especially rich percussion soundscape, and includes the sound of applause at the end—perhaps the only place where the live source of the material is audible. "Le Réveil" is the oldest piece here, and its bass ostinato is the closest thing to rock in the program.

Art Zoyd has created a unique sound, one that borrows at least as much from the classical avant-garde as from the progressive rock world from which it sprang. They have something in common stylistically with fellow RIO groups Henry Cow and Univers Zero, but went much further away from rock music—making them arguably the first post-rock band. This sampler has a lot to offer to fans and newcomers alike.