By IAN PATTERSON
December 27, 2015
Sign in to view read count 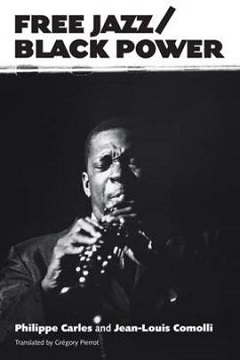 Forty four years after its publication in French, Philippe Carles and Jean-Louis Comolli's thought-provoking, fiercely intellectual book Free Jazz/Black Power finally finds its way into English, thanks to Grégory Pierrot's translation and the good folk at University Press of Mississippi. The four words of the title reference four histories that "in the 1930s or 1950s, did not seem like they could converge or interact." Essentially then, Free Jazz/Black Power is a treatise on the confluence of avant-garde jazz and radical African American politics, with a piercing eye cast on the ideological discourse of (white) jazz criticism, which in the main panned free-jazz as so much jarring noise.

The book's narrative—and the Algeria-born French authors' left-leaning approach—cannot be fully understood outside the context of its time, that's to say, a time of heightened socio-political tensions in the USA—not to mention France and Algeria—as radical black politics took wing and as anti-Vietnam war protests chimed with the pro-independence movements of the politically oppressed around the globe. Carles and Comolli wear their Marxist badges on their sleeves, viewing all jazz and jazz criticism as politically and economically determined, with jazz—from its African-American origins—essentially depicted as a cry for freedom, while capitalism/the white establishment is cast in the role of jazz's colonizer, usurper, oppressor and manipulator.

The author's exploration of the reasons behind the largely negative reactions to free-jazz—on both sides of the Atlantic—through an analysis of the social, cultural and political origins of jazz from its earliest days was boldly innovative in 1971, predating the so-called New Jazz Criticism by two decades. To fully understand free-jazz and the violent reaction to the music it is necessary, the authors assert, to be aware not only of African American history but of African-American intellectual traditions as well. The authors may be Marxist in outlook but their stance reflects the influence of American thinkers such as E. F. Frazier, W.E. Du Bois, Sterling Brown, and above all, Leroi Jones (Amiri Baraka).

Why, the authors ask from the outset, if jazz's pioneers were black, were its critics---with a small number of notable exceptions—predominantly white? How did jazz become a sanitized popular music for consumption by white audiences, often far removed from its African-American roots? Why did the black middle classes largely reject jazz in its rawest form? Why was white America and the black bourgeoisie so keen to embrace jazz as art? These are simple enough questions but the author's explanations reveal complexities that get to the heart of the race/class issue in America—with echoes that resonate down through the decades to today.

That free-jazz—dating here from approximately 1960 to 1971—was an inevitable consequence of African-American's intolerable conditions is a central tenet of the book. The discriminations and exploitations that blacks faced—not only socio-politically or economically but psychologically—in the grip of white cultural domination created, the authors posit, "a point of no return that makes the leap of free jazz absolutely necessary."

If free-jazz appeared initially to be a purely musical phenomenon as the authors state, then it was the pressure of the greater political forces at large that signalled the music's actual political status and function. Jazz and politics have, say Carles and Comolli, always been closely interwoven and this theory makes for a refreshing and challenging alternative to the usual, linear and non-conflictive jazz histories that abound: "When white determinations reign for too long, antagonistic determinations, resistance, and contradictions are reactivated. This movement back and forth makes up the history of jazz, just as it makes up the ideological struggle of Negroes."

One of the authors' most interesting assertions is that free-jazz and not bebop represented the first true revolution in the history/evolution of jazz; for Carles and Comolli bebop exercised "a kind of aesthetic activism" and although it had represented a radical shift from swing, bebop soon found itself culturally and economically exploited. Unlike bebop, free-jazz, state the authors, was characterized by an emphasis on political signalization via the musician's heart-on-sleeves statements and in the song titles that referenced African heritage and demanded freedom.

Free-jazz' powerful, soul-wrenching vocabulary was not merely an expression of anger and freedom but a reclaiming of a people's disenfranchised voice—a political act of empowerment.

Archie Shepp's statement that free-jazz musicians were merely an extension of the black nationalist/black Muslim civil rights movement lends credence to the authors' claim that the predominantly white jazz critics' were "lying to themselves" when considering free-jazz from a purely musical standpoint. Almost five decades on, the relative critical silence regarding Coltrane's latter-day avant-garde output, for example, raises the question: what has changed? History, it seems, has never been as slow to catch up with events as it has been with free-jazz.

The bibliography weaves multiple trails to further, influential works regarding African-American history and the extensive discography will prove a valuable resource for anyone interested in tracing the politicization of African-American music from the early decades of the twentieth century.

Fascinating and provocative in equal measure, Free Jazz/Black Power surely possesses the intellectual rigor to reignite the free jazz debate among the burgeoning jazz academia and contains enough ammunition to ruffle the jazz community at large. Carles and Comolli raised questions in 1971 about jazz ownership that, forty four years later, will still resound with anyone concerned about the history of race relations and the class struggle in America.