By Chris May
September 4, 2021
Sign in to view read count 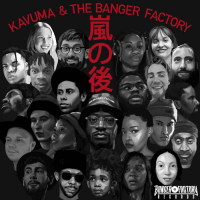 London-based trumpeter and composer Mark Kavuma was last seen in this parish in July 2019. At the start of that month, Kavuma released his second album with his nonet, The Banger Factory. A couple of weeks later, he led a quintet on the floor of the Barbican Art Gallery, performing Thelonious Monk's Brilliant Corners (Riverside, 1956) on the opening night of an exhibition celebrating the work of Monk's contemporary, the Abstract Expressionist painter Lee Krasner, who was a big Monk fan.

The Banger Factory was one of the great albums to come out of London that year, rooted in hard bop but with twists and turns and a thoroughly modern vibe. The Barbican gig took the audience back to mid-1950s bohemian NYC, faithfully recreating the spirit of Monk's album while adding some tweaks, a particularly imaginative one being the replacement of Monk's piano by a vibraphone. It was a great evening.

Now Kavuma and The Banger Factory are back with their third album, this time on Kavuma's own label. It is another blinder. The group has been expanded to a tentet: out goes second tenor saxophonist Kaidi Akinnibi to be replaced by Ruben Fox, and in comes trombonist Trevor Edwards. Otherwise the lineup is unchanged. At its harmonic core is a chordal-instrument quartet comprising vibraphonist David Mrakpor, guitarist Artie Zaitz, Hammond organist Reuben James and pianist Deschanel Gordon, creating a unique and often trippy sound which is carefully arranged to avoid polyphonic overload. The key horn players, as before, are Kavuma and tenor saxophonist Mussinghi Brian Edwards, who is the personification of all that is immortal about classic era Blue Note tenor players. There are also some notable guests, including trumpeter Dylan Jones from Ezra Collective and tuba player Theon Cross from Shabaka Hutchings' Sons of Kemet.

Kavuma is as gifted a composer as he is a trumpeter. He wrote all seven tunes on The Banger Factory. This time there are four originals and three well chosen covers: "Love Will Find A Way," from Eubie Blake and Noble Sissle's 1921 Broadway show Shuffle Along; "David Danced," from Duke Ellington's Concert Of Sacred Music (RCA, 1966); and Sam Cooke & The Soul Stirrers' "One More River." The album opens with Kavuma's "Arashi No Oto," an affecting ballad on which Kavuma channels Clifford Brown. The tune was originally titled "After The Storm," but Kavuma likes the way it sounds in Japanese. "I thought it a fitting title, with everything that has been going on over the last year and a half," he says. The album closes with "One More River," an uplifting mix of gospel music and New Orleans marching band, where Theon Cross comes into his own and an eight-piece choir takes it out. Every track in between is a joy, too.