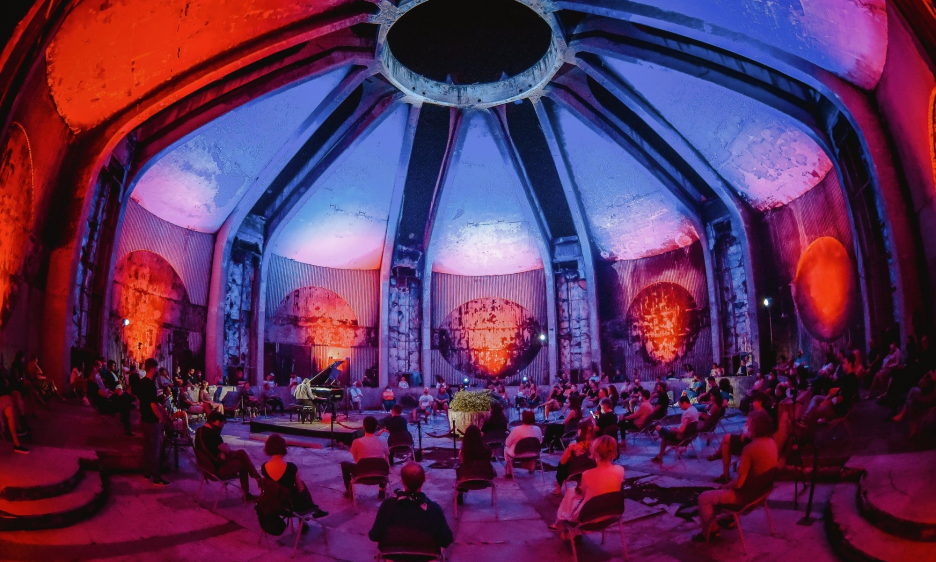 The music world does not lack fine pianists working in any genre, but those who can sustain listener interest through an extended solo set have always been in shorter supply. One such artist who has been able to captivate audiences with his solo piano endeavors is Ukrainian pianist and composer Lubomyr Melnyk. Melnyk is not your average pianist and composer. His career stretches decades back when he developed his own method of performance which is called "continuous music." It's an original musical language that has yielded an unparalleled body of work and with the passage of time, it has become very distinctive. Melnyk's concert at the Skopje Post Office during his brief summer tour amid another wave of the current Covid pandemic was a triumph of atmosphere, craftsmanship, and feeling, which had the audience entranced throughout. The stage was set for maximum atmosphere—the concert took place at the main hall of the Post Office that was ravaged by fire some years ago. The building is a masterpiece of brutalist architecture and its model was even presented at the MoMA museum Brutalist exhibition a while ago (Toward Utopia) but since the fire, it was left unused until now. Without the lights, the location resembles a post-atomic bunker but with the array of soft lights, the location was turned into a magical space. Because of the pandemic and the social— distancing measures, there were ranks of empty spaces between people in attendance and no amplification, but within its confines, this concert ­burst with expression and humanity.

Melnyk's compositions are lengthy and methodic and he opened the concert with "Illirion," which started quietly with cascading notes and slowly began building a quiet intensity. Very quickly it became obvious that Melnyk builds his music in a cellular fashion and lets the music unfold slowly, which resembled a river of notes. The music has multiple and independent movements and it's like melodies within melodies and harmonies within harmonies. As the composition picked up the pace he would play rapidly a figure over and over again and notes and figures would turn into cycles, thus providing the audience a soft bed of sounds. The music evolved naturally with more and more moments of unadorned, almost naïve beauty. He was using the building blocks of human life out of disparate elements that combine and evolve in novel and fascinating forms. The melodies were coalescing and transforming, dissolving or shattering into kaleidoscopic reveries.

In between the three compositions he played that evening, Melnyk would talk at length about various subjects such as his musical language, metaphysical issues, problems, etc. The other two compositions were even longer than the opener. Dazzlingly amorphous and moodier "Butterfly" and "Windmills" emulated particles in perpetual swirling motions. The compositions took their time to evolve and they showed other sides of his compositions such as beauty, lyricism, and elegance. Melnyk's touch and nuanced expressiveness brought certain freshness. He is a thinking performer, always probing beneath the musical surface. The sound throughout was gorgeous and no amplification was used throughout. Even when Melnyk addressed the audience he didn't use a microphone. The location's acoustics provided everything.

The entire show passed by in a dizzying two hours with Melnyk's hypnotic music making the duration seem much shorter. The delight of attending this concert was at times almost overwhelming. The audience was served up with something very rich and detailed, expressive and heartfelt and spiritual. At times when life has become endangered and perilous, this was a joyful reminder that life and art will go on.