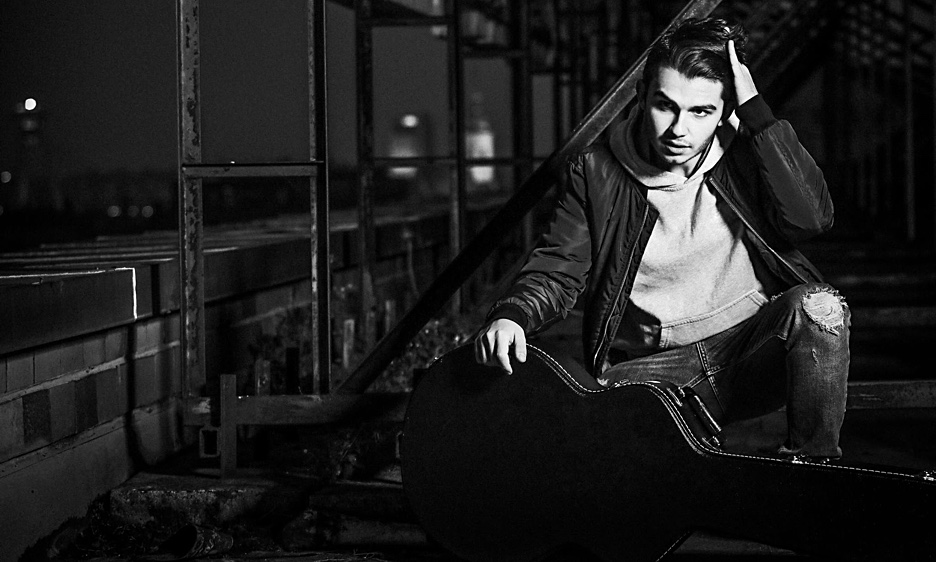 By R.J. DeLuke
June 18, 2018
Sign in to view read count
Listening to Andreas Varady play guitar, it's difficult to guess his age. Its not just the fleet fingers across the fret board, the subtle bending of notes and the dexterity. Many young players display those features. He possesses a warm tone, a mature style with free-flowing ideas that go to interesting places. His style is mature and he's a teller of stories.

Mature and strong enough to impress Quincy Jones, who brought the guitarist into his management company after hearing him a few years ago, saying he sounded like George Benson in his teens. "All you can do is listen, because you are left without words," he says in the liner notes to Varady's new CD.

Varady is all of 20. His boyish looks belie his intensity and focus when it comes to his instrument. But the sense of wonder and openness of spirit that comes with that age are his allies. The native of Slovakia, of Hungarian descent, recently released a new album, his third, The Quest (Resonance Records), and it is a statement like few so early in a career. It contains music—all original—with many moods, executed by a group that feels the music and interacts as a unit.

Three quarters of the quintet on the recording are family—Andreas, his brother Adrian on drums (a 15-year-old blossoming fiend) and father Bandi. They are joined by two other young musicians, fellow Slovak Radovan Tariska on saxophone and Benito Gonzalez from Venezuela on piano. Unlike the first two albums of Varady's career, this one is more to his vision. He produced it and oversaw every detail.

Varady is a self-taught guitarist. The ever-evolving results are speaking for themselves. As a producer, he has shown similar efficiency.

"It's great. I'm working with great people," Varady says of Quincy Jones Productions. "They understand what I want to do. We're a good team. We have good ideas about what we want to do and the goals we want to reach, growing and pushing my career."

Approaching the recording, he says he never had any concrete concept in mind except "creating the music I like and what is true to myself at this time... It was created in a period of my life that is experimental and creative. I'm doing my music. My vibes. It's never stiff."

Having his family and other natural sidemen, not stars, was important As well. He says, "I wanted to have my dad and brother on it. That's how we played together in a trio. That's how we sound together. That's how we react together. The chemistry. That's what people love at our gigs. We tried to recreate what you heard on those gigs."

"We put it together in a nice way where it fits for the album. I'm really happy with it, from the cover to every detail. It's a special album to me. It's the first time I've done everything," he notes. "I'm happy and proud of it. It was about the album, the story behind it and the ideas.

He has been touring with the music, but already working on new things that will culminate in another recording at some point. Something pushing beyond what's there now, "current, right-now type of music."

The initial cut, "Lost Memories," is brief, but an adventure to come. "Radio Joint," displays a strong and multi-layered by the younger Adrian Varady on drums. He's a catalyst throughout, always stoking the fire, which at times gets pretty damn hot. Tariska's solo is free and furious—the whole, combined with piano and soaring guitar, is like a trip down river rapids. "Follow Me" starts out pensive and takes a serpentine path with varied textures. "The Quest To Openness" is aptly named, as the group opens different musical doors on a melodic journey. The variety and depth of the music is stellar. It's raucous and joyous. Softer moments give way to explorations. Astounding from someone who does not read music.

"When I write, I usually just play and come up with different ideas. I record it on my phone or something like that. I listen back and change it. Once I'm done it stays in my memory. If I ever need notes of it, I know people that can help me with that. I haven't really needed it much. But if I need to write out charts for someone, I can do that easily. But all the notes and everything that's so detailed, I never, ever in my life have done that. Either we have to practice before a gig and they learn, or I give them charts."

Alvarado, a child prodigy, picked up the guitar at the age of 4 in Slovakia. " I was just playing. I picked it up and my dad taught me a few tunes. I was self-taught from there on. Figured stuff out on my own. Then I figured charts out on my own. I don't read notes. But I've never required it so far in my life. If I do, I'm sure it's not hard. But I can read charts. I didn't take any training. I just wanted to play music. So I just picked up guitar up and played."

It was jazz tunes that he started picking out in Slovakia. "I was listening to music and playing what my dad taught me," he says. Living in a small town in the southern part of Slovakia, there was no jazz scene at all. But his family liked jazz. "I was always playing jazz. At the very beginning it was some random stuff," he says. "I was playing easy jazz standards and stuff like that. It's always been jazz. But when I moved to Ireland when I was about 10, I got more into Miles Davis, Charlie Parker and John Coltrane.

His first guitar influence was George Benson. Eventually he moved toward Peter Bernstein and Kurt Rosenwinkel. A friend told me about Jonathan Kreisberg as well. Allan Holdsworth... Kreisberg and Kurt and Peter Bernstein was a bit later, when I was like 13. Before that, heavily Miles, Parker and Coltrane. Cannonball Adderley and Kenny Kirkland. Stuff like that. That would have been the main people that I listened to and learned solos and tunes. I learned like 20 different types of Parker tunes and I would play them. I was obsessed with that. Then eventually, you grow. You want to do more of your own thing. I started listening to more current people, a more modern, contemporary form of jazz. Eventually writing my own music, trying to create my own sound and play that."

"I was kind of an odd, weird kid in school," he says. "I have always been around jazz, ever since birth." Varady likes other forms, like hip-hop, and didn't really get into rock music until he as a little older. "Jazz is what I listened to. It's also what I lived. Jazz is very natural to me. It's always been there. I love the creativity. It's interesting to hear all the different people express themselves and their ideas, pushing the boundaries and their limits. Hearing all the unique sounds. Everybody has a different touch, the way they play their instrument."

His first year in Ireland, at about age 9, he was playing music in the streets of his new home of Limerick with his father. "It was really great. A bunch of people gathered around us and they loved it. I met a lot of people I built it up from there. Just keep building and building. I also went up to Cork and busked a bit up there too."

As Varady reputation grew, he began to get gigs that included some of the European festivals. I played at different jazz festivals. His first big nightclub work was at the renowned Ronnie Scott's in London in 2011. "I was 12. We played and it was pretty awesome," he says.

In the summer of 2012, he had the fortuitous opportunity to play at the International Montreux Jazz Festival and came to the attention of Jones.

It was so crazy to do that," he says. "I had know idea Quincy Jones was even there at the time. I was just going there just like any other gig or festival. I was supposed to do a gig there with Global Gumbo, a band of talents from different parts of the world. I said, 'OK, cool we can do that." We did that gig and it was fun. Also, I did my own gig. A month later, I get an email that QJP, Quincy Jones wants to manage me."

That relationship is bringing Varady and his monster talents even more to the forefront. Still, he does not planning on moving to New York City, where so many young jazz musicians go for exposure, experience, and work.

"I like Ireland. I like the vibe, the people, the food, the general quality of living. I've been everywhere. I love a lot of different places. I like visiting New York. I love visiting London. It's only 40 or 50 minutes away. For me, other than Ireland, maybe moving to the capital city is something I would do. I like going to New York just to hang sometimes. But to live permanently, I don't know if I want to do that. I love that city. It's one of my favorite cities. But I think Ireland is my place."

He does have a goal to play more in the U.S. and stay in New York for a while "it's amazing to hang there and hear all kinds of music.

"I want to record more music and keep pushing my musical boundaries. Show growth. Tour and play more. I love traveling the world with my music and talking to the people. There's not one thing I don't like about it."