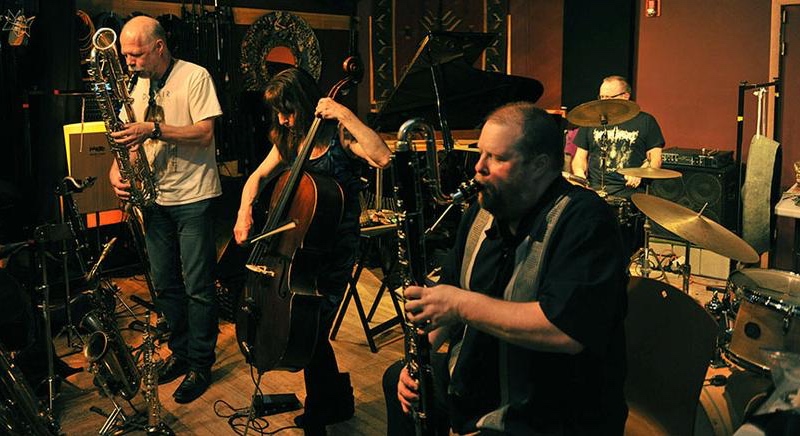 If the Evil Clown record label is prolific on a per capita basis, then its founder is exponentially more inexhaustible. David Peck (aka PEK) founded the label—at first, unbranded—and its roots date back a little more than twenty years ago to Cambridge, MA. The musicians under the label could best be described as a "collaborative collective" and in various formations turn out twenty-five to thirty albums each year. The core collective under Evil Clown is Leap of Faith, which when expanded to the Leap of Faith Orchestra includes players from Metal Chaos Ensemble, String Theory, Turbulence and Mekaniks. The common denominators in these collectives is the presence of PEK in each, and a completely unorthodox approach to creative improvisation. An unfamiliar listener, dropping into an Evil Clown recording may find themselves submerged in world of musical anarchy but there is a hidden order behind the apparent mayhem, as we will see later. By PEK's own admission, this is ..."demanding music with a very limited total audience...."

PEK was born in Sacramento CA in 1964, his family moving to Chappaqua, New York when he was two and then back to northern California seven years later. Raised on a musical diet that went from Dave Brubeck to Pink Floyd and Frank Zappa, his early years were an eclectic mix of influences. A saxophonist from the time of elementary school, he studied clarinet and piano as well but didn't take music seriously until later in life. As a high school senior in 1982 PEK says, "I have a vivid memory of hearing for the first time the album Tin Pan Alley (ECM, 1981) by Jack DeJohnette. Chico Freeman and John Surman play saxophones in a very free style with lots of altisimo register playing and multi-phonics on this album. Although I had been playing saxophone maybe 6 years at this point, I did not realize that these kind of sounds were possible on my instrument. Hearing these sounds eventually led me to read all the available literature I could find about free jazz and post-modern jazz history which in turn led me to Cecil Taylor, Sun Ra, Anthony Braxton and the Art Ensemble Of Chicago. Art Ensemble of Chicago was particularly important to me since it established a precedent for very broad palates and woodwind multi-instrumentalism. Roscoe Mitchell is clearly a primary influence for me." PEK abandoned music altogether while attending UC Davis for mathematics, a discipline that would later partially inform his music. As restless a student as he was a musician, PEK moved on to UC Santa Cruz to study philosophy and fell in with a group of musicians that set him back on a path toward music -this time, with a more focused discipline. A former student of saxophonist George Garzone, he moved to the Boston area to attend Berklee College of Music in 1989. In my interview with PEK, he stated that in the years following Berklee his exposure to diverse styles of music grew: ..."my interests are very wide and I specialized in fairly unusual music including modern and post-modern classical (especially after 1950) and world music from all over, but with special attention to the far east where the music is structured very differently than typical in the west. I also became very familiar with the history of free-jazz and post-modern jazz." In fact, PEK had played with William Parker and the late free jazz trumpeter Raphe Malik in his early music career and later with Joe Maneri and Mat Maneri.

A pivotal force in Leap of Faith—and other Evil Clown projects—is Glynis Lomon. Playing cello and aquasonic (a bowed metal instrument) as well as providing wordless vocals, she is a graduate of Bennington College where she studied with the renowned musician and composer Bill Dixon, performing and recording with the trumpeter throughout his later career. Lomon has also played with the best of free jazz and avant-garde, including Jimmy Lyons, Cecil Taylor, Butch Morris, William Parker and Joe Morris. It was through Masashi Harada that PEK and Lomon began their association.

Harada, a Japanese born multi-instrumentalist studied both vocal techniques and percussion in his native country and later moved to Massachusetts where he studied piano with Avram David. Harada also has an impressive resume having recorded with bassist Barre Phillips, Mat Maneri, and Joe Maneri and had performed with Cecil Taylor's trio in 1990. PEK and Lomon met when both were part of the Masashi Harada Sextet in the early 1990s. It was here that PEK and Lomon networked and developed an appreciation for extended techniques, multi-phonics and microtones that would become tools in their own group. The two honed their far reaching technical skills taking them into the Leaping Water Trio (originally with Lomon, Harada and violinist Greta Buck), a precursor to Leap of Faith whose 1995 debut included Lomon, PEK, trombonist Mark McGrain and occasional guest artists.

A rotation of visitors, with PEK and Lomon always at the center, along with multimedia performances, marked the continued artistic development of Leap of Faith until 2003. PEK again left behind his day-to-day music career while Lomon remained involved with other projects, most notably Bill Dixon's Tapestries for Small Orchestra (Firehouse 12, 2009) along with brass masters Stephen Haynes, Taylor Ho Bynum and Rob Mazurek and bassist Ken Filiano. PEK, meanwhile, had gone on to work on graphics and programming for the noted structural engineering firm Simpson Gumpertz & Heger whose projects include the design or renovations at Epcot Center and Grand Central Terminal. He makes an interesting comparison to the cerebral process involved in his tech life and his music: "This work... was and is intellectually very challenging and exciting in contrast to all of my earlier jobs...One of the main things I do is provide graphics support to Engineering Expert Witnesses in huge Construction Lawsuits. This involves pretty deep understanding of both the technical Engineering issues and Construction Law in addition to running the graphics software. Over time I grew this group to have a number of staff. I have worked on lawsuits involving the Big Dig in Boston, the Washington Monument, the New York Subway system and literally hundreds of others. These disputes are typically about huge sums of money—frequently tens of millions and sometimes hundreds of millions dollars or more. For a long time, I did not especially miss making music. For me, music making is essentially a cerebral, rather than visceral or emotional activity. My favorite thing about playing music is the deep concentration state that you enter when playing with other skilled improvisers. No other activity that I have ever engaged in requires such intense focus and concentration, although some aspects of my day job do require very heavy concentration and this did satisfy my needs for a long time."

PEK, however, was not fully satisfied by the challenges of his day job. In his absence from full-time music he played occasionally with several of drummer Yuri Zbitnov's groups and recorded a number of tracks for the drummer's band called Mission Creep in 2013 and 2014. While working a graphics project in Manhattan in 2014, he visited the Downtown Music Gallery, renowned globally for its collections of avant-garde jazz, experimental and creative music from around the world. What he learned from the DMG owner, Bruce Lee Gallanter, was that the Evil Clown catalog—older titles from when the original group was intact—were selling very well. PEK saw the interest level as an opportunity to reform. In early 2015 he and Loman reunited to perform with the original members of Leap of Faith while lining up a new formation to include saxophonist/clarinetist Steve Norton, and Zbitnov. Norton had played saxophone with Either/Orchestra, Joe Morris and Raphe Malik while Zbitnov had previously run his own label for new jazz, rock and electronic music, playing in a number of those groups. On occasion, the current group features Andria Nicodemou on vibes.

The groups under the Evil Clown umbrella are broken out by sound dynamics and, in PEK's words, are as follows: "Leap of Faith—Primarily horns, strings and percussion. But open to broader instrumentation and constantly varying its size and personnel with different guests added to the core ensemble. Metal Chaos Ensemble—Chaotic rhythms on metal percussion instruments with my horns. When I started up in 2015, the first new instruments I acquired were gongs, bells, Tibetan bowls, etc. My original intent was to provide orchestral color to the percussion in Leap of Faith, but when Yuri and I did the very first set MCE as a duet, it was immediately obvious that this was also a separate project. String Theory—Orchestral strings and my horns. In the 90s period, Glynis and I did some Leap of Faith sets with other string players—string quartet plus myself. I wanted to update this concept. Turbulence—Primarily horns. A couple of these sets also include Yuri on the drum set. Mekaniks—Greater use of electronic instruments, sampling, loops etc. The newest Evil Clown ensemble. Leap of Faith Orchestra—The large ensemble comprised of all of the smaller ones. When any two or more of the above play together or the ensemble reaches a size of 7 or 8 I call it LOFO. When all of the groups play together, I call it the Full Orchestra. For the full LOFO I prepare a score which controls when people play and gives them English language descriptions of the sonority I want to achieve. This is the only Evil Clown setting where there really is pre-planned structure for an improvisation. As ensemble size increases, achieving transformations across sonorities and development readily apparent to the observer becomes more difficult without planning. I use directions that are simple enough such that no rehearsal is required. I still consider these composed works pure improvisation even though there are planned events because I am merely applying constraint to the decision making processes that the players make when no score is present. There is still no melodic, harmonic or rhythmic information specified."