BY DAN BILAWSKY
October 7, 2016
Sign in to view read count 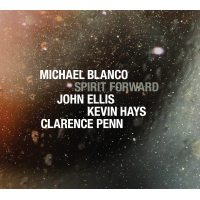 Spirit Forward carries several connotations in its name and sound. First there's the overt reference to bartender terminology and the way it connects to the music presented by the feisty and flexible foursome of bassist Michael Blanco, saxophonist John Ellis, pianist Kevin Hays, and drummer Clarence Penn. A spirit-forward cocktail is one which focuses on enhancing rather than masking the core characteristics of a base liquor through the addition of other spirits and suggestions. It's an intoxicating parallel for what takes place here, as the sonic signature connected to each musician is magnified by the presence of the others and the central idea of a song is highlighted by secondary ingredients. Then there's the relationship to movement in the titular term. It's as apt an idea as any to connect to this charged unit. Lastly, there's a nod to the act of putting one's being into the world through the creation and distribution of art. It's essentially an act of releasing one's spirit forward via music. A better title truly couldn't be found for this one.

A few listens to this album make it clear that Blanco's drink of choice is one that's both familiar to the taste buds at first sip and far-reaching in the way it hits the palate on the back end. Much of that is due to the chemical reactions engendered by this mixture of musicians. With Ellis, a longtime Blanco colleague who's both tuneful and adventurous in his approach, the bassist-composer brings the central flavors of his music to the fore; in Hays, Blanco found a kindred spirit who follows and writes any and all manner of recipes, be they simple and harmonious or complex and powerful; and through Penn, Blanco filters his own heartbeat and finds different rhythmic avenues to pursue.

The album opens with "The Mystic Chord," a taste of Alexander Scriabin as viewed through a post-modern mindset. Blanco breaks apart that composer's trademarked six-note chord and transforms it into a bass line to propel the music. He locks in beautifully with Penn, who nudges, pushes, and drives through everything. Ellis, meanwhile, sings, struts, and swoops through the song in appealing fashion, and Hays covers all the bases, doubling bass lines, twisting through the harmony as a soloist, and supporting the entire ensemble. It's a first glance at what proves to be an irresistible musical work brimming with bright thoughts, creative gestures, and well-built songs.

The program keeps on moving with "Notes From Underground," a waltz that nods to basement jazz clubs and the bass line that leavens the song. It provides a good opportunity to hear Blanco as a soloist, adding measured thoughts that make their mark and stand in sharp contrast to Ellis' stronger personality currents and Hays' sprightly finger dance. The numbers that follow—the melodious "Song Without Words," the swinging title track, the straight and flowing "Acrobat," the irresistibly bluesy "Last Stable Orbit"—all bring out different aspects of Blanco's personality while showcasing everybody in the group. "Reasons To Be Pretty," a low-key charmer that's perfect for Hays, and "The Boulevardier," a curtain-closing swinger that takes structural cues and inspiration from Thelonious Monk's "Green Chimneys," round out the playlist on the highly enjoyable Spirit Forward. It's a truly fulfilling listen from the first notes to the last.